A suspected illegal dental surgery in East Vancouver was raided by the B.C. College of Dental Surgeons Thursday, in the latest bid to crack down on unlicensed dentists.

College received tip off from member of the public 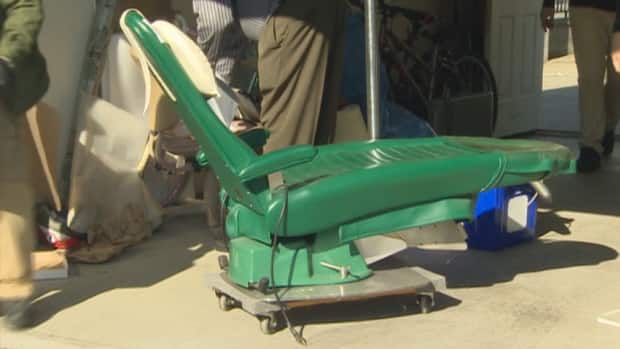 7 years ago
2:18
Police took dental equipment out of an ordinary-looking house 2:18

A suspected illegal dental surgery in East Vancouver was raided by the B.C. College of Dental Surgeons Thursday, in the latest bid to crack down on unlicensed dentists.

The raid, at a house near the intersection of Adanac and Kamloops streets, was also attended by Vancouver police, who said they were there only to keep the peace.

The alleged illegal dentist is a resident of the house, and officials say he was served with papers and a receipt for items taken, including boxes of dental equipment, several files and at least one dentist's chair.

College investigator Alex Penner said the house had all the equipment needed to perform a dental surgery.

"I understand there were even patients arriving as we arrived this morning," said Penner.

Neighbour Aaron Ross said he hadn't noticed any extra traffic going into the house, but he wasn't surprised by the allegations.

"If I came to this country with a dental degree and I couldn't get work, I'd probably open one too," said Ross.

Penner said the college had decided to act after receiving a tip from the public, but he had no idea how many underground dentists are currently operating in Vancouver.

"As we find them, we investigate them and we act...That's all we can do, is seize the items."

The raid appears unrelated to the case of alleged illegal dentist David Wu, who was sentenced to three months in jail in absentia for contempt of court by the B.C. Supreme Court Tuesday.

Wu, who also goes by the name Tung Sheng Wu, has been in hiding since August, when college officials searched his Burnaby home, seizing dental supplies and shooting video of dirty and outdated equipment.

According to WelcomeBC, foreign dentists hoping to practice in B.C. must complete a full-time, two-year qualifying program or degree completion at an accredited university, as well as registering with the college, and completing either the NDEB or the NDSE.

As an alternative, dentists educated abroad can have their training assessed through an equivalency process, undergoing three assessments before taking the NDEB written exam and Objective Structured Clinical Examination.

The college does not require potential dentists to pass an English language test, but two such tests are required to enter the qualifying and degree completion programs.

According to the college, it registers, certifies and regulates more than 3,400 dentists in B.C.