'I was head-to-toe on fire': Woman burned in backyard firepit explosion awarded $1.1M

A B.C. woman burned by flames from a firepit has been awarded $1.1 million in damages after she sued the hosts for negligence.

Host of party caused explosion by dumping oil into a firepit

Alla Abdi was enjoying a cool evening sitting around a firepit with others in Burnaby, B.C., until one of the hosts of the gathering poured motor oil on the fire setting off an explosion that left her with burns to 33 per cent of her body.

The 23-year-old dropped to the ground and rolled, but says she couldn't put the fire out.

Her clothes burned almost entirely as she tried to rip them off, struggling with buttons and clasps.

Now 27, Abdi sued the hosts of the party, Paul and Roberta Bottomley, and the City of Burnaby for negligence.

A B.C. Supreme Court jury in Vancouver awarded her more than $1 million in damages this week — a bittersweet victory.

"Nothing in this world can compensate for what I've been through. I would trade anything in the world for that not have happened," Abdi said Friday.

"But, this outcome, I really hope people can be careful when it comes to fire."

Abdi says she was sitting close to the fire on the May night in 2014 when she saw one of the hosts come up from behind her with a bucket in his arms.

In an instant, he dumped motor oil onto the flagging fire.

Flames exploded and hot oil wrapped itself around Abdi's body.

No time to react

It was a coworker who had invited Abdi to the gathering the Bottomleys were hosting and Abdi didn't know them personally.

"Everyone was there. It seemed fine," she said.

Abdi said she didn't have time to react when oil hit flame.

"Before I could tell myself to move, the fire had already exploded," she said. 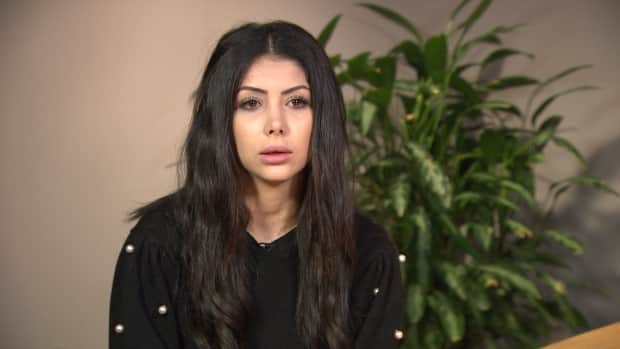 3 years agoVideo
0:59
Alla Abdi was 23 when she was burned at a backyard campfire. She said her life has changed in nearly every way since that night four years ago, which left her with burns on 33 per cent of her body. 0:59

"I was left naked with my bra on fire ... I took it off and then my hands were on fire. I looked down and I saw my skin had all bubbles — all over my body," she said.

"At that point, I just fell to the ground because I thought, 'I'm going to die.'"

A neighbour called 911 and an ambulance took Abdi to hospital.

She remembers nurses crying with her as they scrubbed her burns to keep infection out.

"I remember it perfectly," Abdi said of the night. "Moment by moment."

In the four years since, she's had to learn to walk and use her hands again.

Her skin, once bubbled black, is now mottled pink.

Abdi's lawsuit alleged the hosts and city were negligent.

The city blamed the hosts, who were renting the property, saying they didn't comply with bylaws and terms of their rental agreement.

They didn't have permission to build a gravel area with a firepit on the rental property, according to court documents.

The couple argued Abdi should've been more responsible for her own safety and sat farther away from the fire.

A jury, asked to determine who was liable for the incident, assigned most of the blame to the hosts.

Jurors actually wanted Abdi to receive more than $4 million — but under Canadian law, there's a cap on awards for pain and suffering in legal battles.

On Thursday, a city statement said it was "reviewing its options in respect to the jury's decision."

The lawyer for the couple has not responded to the CBC's request for comment.

Later this summer, Abdi will celebrate her 28th birthday. She's returned to work and adopted a kitten to keep her company.

She won't go near any fire — not a campfire, not a bonfire, not a pilot light on her kitchen stove.

"I cannot even put into words how much it's affected my life," Abdi said.

"The largest loss for me was my old self. I truly felt like I had died. I was just living, but my soul was gone and that's who I was missing — and I'm still missing."

She said the knowledge that she got a second chance where others haven't keeps her going.

Her advice to other burns victims runs along the same lines.

"It's going to, eventually, get better," Abdi said.

"It's going to take time. But just know that there is a light at the end of the road."