Vancouver's annual Accordion Noir Festival celebrates underground accordionists, but this year, one of its feature performers is part of a not-so-underground community tradition.

Gunther Kablutsiak hails from Arviat in Nunavut and has been playing the accordion since he was eight.

He says the accordion is just part of his Inuit identity.

"It makes me more like an Inuk — that's who we are and what we do back home ... It means everything to us because we have to exercise and keep ourselves warm during the winter and keep us fit."

In fact, 33-year-old Kablutsiak decided to play the accordion after attending square dances as a kid.

"I watched the local elders and accordion players during their square dances. That's how I learned." 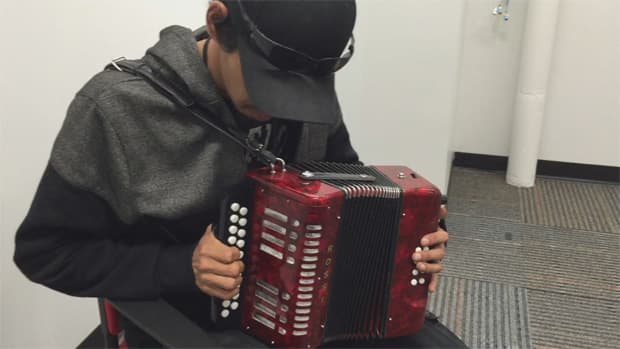 4 years agoVideo
2:12
Gunther Kablutsiak is in Vancouver for the Accordion Noir Festival 2:12

His own accordion — which he described as a big toaster with white buttons — was passed down from an elder.

"My wife's granny used to own this one," he said. "When she was about to pass, she said this is going to be Gunther's accordion."

A long history of Inuit accordionists

According to a paper published by Canadian composer Jim Hiscott, accordion music — along with fiddle music — was brought into Canada's north by European whaling crews between the 17th and 19th centuries.

Hiscott described how the community would hold lively square dances with accordionists and fiddlers when the whaling ships docked.

Soon the accordion became a must-have item, and square dances became an integral part of life in the North.

The popularity of the tradition somewhat waned in the 20th century with the incursion of mass pop culture, but Kablutsiak said the instrument is experiencing a sort of renaissance.

"I think it's coming back, because even the younger kids asked me to teach them how to play the accordion when I'm travelling."

You can see Kablutsiak perform at the 9th annual Accordion Noir Festival which takes place at various locations in Vancouver from September 8 - 11.

With files from The Early Edition and Margaret Gallagher

To listen to the segment, click on the link labelled Nunavut's star accordionist Gunther Kablutsiak performs at Accordion Noir Festival