More than a half dozen seniors homes in B.C. do not have potentially life-saving fire sprinkler systems, raising serious concerns about the safety of the province's residential care facilities.

17 care facilities have no sprinklers, The Ministry of Health says 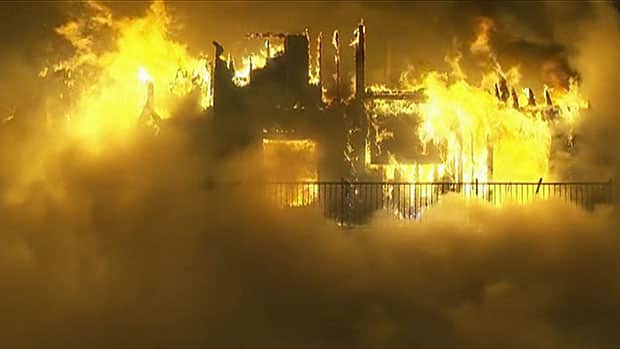 Some care homes without sprinklers

7 years ago
2:24
There are new concerns about seniors' safety after horrible fire 2:24

More than a half dozen seniors homes in B.C. do not have potentially life-saving fire sprinkler systems, raising serious concerns about the safety of the province's residential care facilities.

Terry Horton's 89-year-old father lives at South Granville Park Lodge, a four-storey structure that is home to more than 100 seniors. He said it was a "complete surprise" that the care home does not have sprinklers.

"I thought this was a first class facility and I expected in every way it would be up to code and have all the necessary safety equipment," said Horton.

"My father's on the fourth floor. He's recently broken a hip so he has to use a walker. I know a lot of the residents are in wheel chairs. I would expect if there was a fire, it would be pretty difficult to get all the residents out in a timely manner. So sprinklers, in that case, would be very important."

Older buildings do not require sprinklers

South Granville Park Lodge was built 45 years ago, before the B.C. Building Code was changed to make sprinklers mandatory in all care facilities and residential buildings four-storeys or higher. However, the 1992 amendment does not require older buildings to be retrofitted with sprinklers unless there are other major renovations being done.

As a result, the care home has been labelled "high risk" by the Vancouver Fire Department.

"The sprinklers provide the time it takes for us to get into the building, and it holds the fire in the area of origin. It is a huge concern when they are not," said deputy fire chief Steven Laleune.

The owner of South Granville Park Lodge told CBC News installing sprinklers, which would involve moving frail residents around, could be costly and logistically difficult. He says he is, however, getting a feasibility study done on what a sprinkler retrofit would require.

Horton said he expects residents and their families would be willing to bear some of the expense.

"I'd like it to be brought up to code. If that means paying a bit more to do that, I'd be willing to do that," said Horton.

Building code changes could be coming

On Jan. 23, a fire at a seniors home in L'Isle-Verte, Quebec, claimed the lives of at least 28 people, with as many as four residents still considered missing. The home did not have a fire sprinkler system.

Last April, one elderly resident was killed and 12 were sent to hospital after a fire ripped through a four-storey seniors complex in Langley, B.C. The 30-year-old building also did not have a sprinkler system.

Both fires raised questions about whether enough is being done in Canada to keep elderly care home residents safe.

The Ministry said all the facilities are in compliance with the Community Care and Assisted Living Act, as well as the building codes that were in place when they were constructed.

Meanwhile, the B.C. government said it will be meeting with care home operators in the next few weeks to discuss sprinkler retrofits.

With files from CBC's Eric Rankin