A 6.3-magnitude aftershock has struck off the coast of B.C.'s Haida Gwaii islands — less than 24 hours after Canada's strongest earthquake in more than 60 years hit the same area. 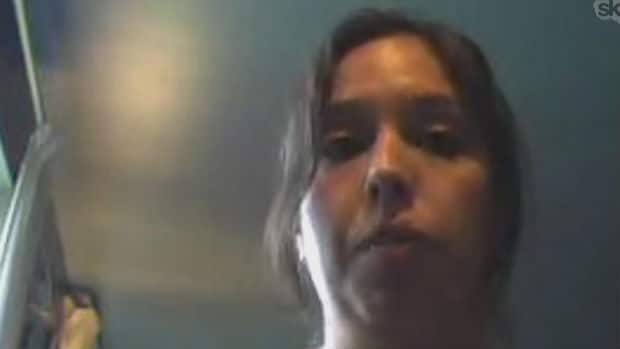 8 years ago
1:13
Raw video from people caught in the earthquake and aftershocks 1:13

A 6.3-magnitude aftershock struck off the coast of B.C.'s Haida Gwaii islands Sunday morning — less than 24 hours after Canada's strongest earthquake in more than 60 years hit the same area.

Officials said the temblor hit 64 kilometres southwest of Sandspit at a depth of 19 kilometres just before noon Sunday. A tweet from Emergency Information B.C. said no tsunami alerts were issued.

Erin Wilson, who lives in Skidegate, B.C., was speaking to the CBC News as the tremor shook.

"It's non-stop," she said. "You hear things creaking and cracking and you hear — oh, another one right now. It's pretty scary."

More than 30 aftershocks have hit the area after a magnitude-7.7 earthquake struck Saturday evening, and several of the aftershocks measured at least 4 in magnitude.

The initial quake triggered tsunami warnings from the Washington border to Vancouver Island and as far away as Hawaii. But the warnings were cancelled early Sunday, several hours after they were issued.

Saturday's quake struck at 8:04 p.m. PT and was also centered off Haida Gwaii, formerly the Queen Charlotte Islands. Some residents reported feeling the quake as far away as Edmonton and Yukon.

Residents near the centre of the quake said the violent jolting from the initial tremor lasted for up to a minute, but no injuries or major damage have been reported.

"I thought right away, we're having a big landslide," said Dave Martinek, who lives in Queen Charlotte City on the island.

"And then it progressed and kept on progressing, and the whole house was just shaking — pictures on the walls.

"I got my son, who was having a nap. He was stabilizing the book shelves. The windows and everything were just creaking," he said. "It was just pure hell there for a while."

"I felt the quake start, and I just yelled to my wife, 'We're having an earthquake.' This one didn't seem to want to stop, it just seemed to get more and more intense," he said.

"The intensity of it — it just kept going. We had lamps in the house fall over, the chandelier we've got in the kitchen was just swaying. You could barely stand. I've never been more scared in my life."

Tsunami warnings were issued for the North Coast, the Haida Gwaii islands, parts of the central B.C. coast, the coast of Alaska and for the Hawaiian islands.

Early Sunday morning, the warnings in both B.C. and Hawaii were downgraded to advisory status, meaning evacuations were no longer necessary, and they were cancelled altogether a few hours later.

Much of the B.C. coast, including the northern and southern ends of Vancouver Island, remained under an advisory overnight Sunday, indicating a tsunami could produce strong currents that would be dangerous to those near the water.

"The water is still treacherous, still dangerous, and the beaches still need caution, but we can go home."

Hours after the earthquake, Dennis Sinnott, who works at the Institute of Ocean Sciences, said the largest wave hit Langara Island, a northern Haida Gwaii island, and measured just 69 centimetres.

There were evacuations in Haida Gwaii and Port Edward, near Prince Rupert.

"It looks like the damage and the risk are at a very low level," Shirley Bond, British Columbia's minister responsible for emergency management said. "We're certainly grateful."

There have been concerns that the B.C. government wasn't quick enough to release information about the quake.

Bond says she's pleased with the response — but added there will be a review.

"I think we sometimes become complacent, but I should say that last night I don't think anyone was complacent," she said.

"People were moving quickly, they were supporting one another ... My job is to ensure that we're doing it as well as possible so we'll debrief about how we responded and what we can do better."

Low-lying areas in the Hawaiian islands were evacuated late Saturday. Geophysicists had feared waves between 1 and 1.9 metres to hit the Hawaii islands, beginning about 10:30 p.m. local time Saturday (4:30 a.m. ET Sunday ET). But Hawaii seems to have been spared the worst.

Four waves about 12 minutes apart have already come ashore, but seismologists say they were smaller than expected.

Sirens sounded every half hour, starting around 7:30 p.m. local time, warning of a tsunami approaching Hawaii. The Honolulu police ordered the streets evacuated and shops closed. Tourists in beachfront hotels were told to stay above the fourth floors.

Brent Ward, an earth scientist at Simon Fraser University, said the earthquake was the second largest to hit the country since 1949, when another earthquake was recorded in the same area with a magnitude of 8.1.

Ward said the area is known as the Queen Charlotte fault, where the earth's plates slide horizontally across each other in a strike-slip action, similar to what happens along California's San Andreas fault.

"Stresses build up because of that movement, and every so often we get the release of that stress in the form of an earthquake."

Ward said he wasn't surprised the tsunami warning was short-lived because the strike-slip movement along the fault doesn't generally trigger tsunamis.

"To trigger a tsunami you need to have a vertical movement of the sea floor, and it's that vertical movement that displaces water and triggers the tsunami," he said. "Because it's sliding across each other, you're not generally moving the water."