Why Canada's decisions on who builds 5G technology are so important

With news Dutch Telecom is keeping Huawei out of its core 5G network, Canada is under even greater pressure to decide who should be part of this country's next wave of wireless technology. Here's a look at what 5G is and why it's so important.

By some estimates, the adoption of 5G technology will increase GDP by $40 billion by 2026

Let's face it — the vast majority of us are not tech wizards.

While an astonishing array of pundits and experts have expounded on the importance of the coming wave of 5G networks, the nuts and bolts of the technology remain a mystery for many.

Ready or not, 5G is going to be a huge part of your life in the future, placing all the more importance on decisions the Canadian government has to make about who should be allowed to provide the underlying technology.

At the very least, you might have to talk about it at a cocktail party or over dinner.

So here are a few answers to the kinds of questions you might have about 5G technology in general and the stakes for Canada in particular. Starting with ...

In the simplest terms possible, 5G stands for the fifth generation of wireless technology.

According to the government's Communications Research Centre (CRC), the first generation — 1G — was introduced in the 1980s with wireless phones that had almost no ability to transmit data.

The next generation occurred a decade later with better sound quality, security and capacity. Email and text became widespread.

And the fourth generation allowed phone users to surf the internet, stream music, access social media, post videos and use a wide variety of apps on smartphones.

The CRC says 5G "will be a game changer in wireless telecommunications, ushering in a network for future generations with more devices, faster communication, and higher speeds."

How will it work?

According to the CRC, 5G networks are expected to improve on existing wireless networks in three main areas.

The first is connectivity, which means the number of devices that can communicate with each other. By 2020 between 50 billion and 100 billion devices worldwide are expected to be connected to the internet.

Just imagine what would happen on today's networks if they all tried to get online at once.

The second improvement will be in the realm of "latency," which refers to the length of time it takes to transfer information across the network, or the lag between sending and receiving.

At present, latency is 50 milliseconds, about half the time it takes to blink an eye. 5G technology will reduce that time to one millisecond.

The third 5G innovation will be the introduction of greater bandwidth. That should enable the downloading speed needed for 3D viewing and other immersive experiences expected to revolutionize entertainment, health care and education.

What is the 'Internet of Things?'

This is a phrase that comes up a lot in any discussion of 5G.

It was coined in 1999 by a British innovator called Kevin Ashton to refer to the world of physical objects — like self-driving cars, remote-controlled thermostats and drones — connected to the internet.

This goes to the importance of 5G latency and the instantaneous send and response times that will allow our devices to communicate directly with each other, essentially cutting humans out of the equation.

"In the 21st century, because of the internet of things, computers can sense things for themselves," Ashton told Smithsonian Magazine in 2015.

"It's already hard to imagine a world without GPS: it helps us find our way around. In the imminent future, it will enable things like self-driving cars, which will give us back the 20 days a year we spend doing nothing but driving, will save 40,000 lives a year in the U.S. alone, will reduce traffic and pollution, and will allow cities to grow without devoting as much land to roads."

5G sounds expensive. What are the economics?

According to a 2018 report prepared by consulting firm Accenture, Canada's wireless operators are expected to invest $26 billion deploying 5G infrastructure between 2020 and 2026.

The Accenture report claims the payoff in that same time will be a lift of about $40 billion a year to Canada's gross domestic product as well as the creation of 250,000 permanent jobs.

The consulting firm analysed the possible savings to particular industries. Farmers, for instance, will use sensors for soil, crops and livestock maintenance.

The savings from "smart irrigation" alone are expected to save blueberry farmers $270 million a year.

And sensors that allow for "predictive maintenance" could have a huge impact in the oil industry.

"A reduction in unplanned downtime and reduction in the risk of catastrophic disasters associated with equipment or facilities failures can have a massive impact to the bottom line, employee safety, and the natural environment in which these companies operate," the Accenture study found.

So what's the issue?

While many wireless carriers will be part of Canada's 5G network, the infrastructure itself will likely be built by a small handful of global players. Nokia, Ericsson and Huawei are the leading firms in the field.

The possibility of a Chinese company having access to the core of Western telecommunications systems has raised questions about the connection between the Chinese government and Huawei.

A 2012 congressional report into Huawei's activities concluded that the risks associated with the company's "provision of equipment to U.S. critical infrastructure could undermine core U.S. national-security interests."

The U.S. has since excluded Huawei from contracts with the American government or its contractors, leading to a civil suit from Huawei.

The Australian government has also banned the company from its 5G networks.

The United Kingdom has banned Huawei from core parts of the British communications network, and Dutch telecom giant Royal KPN NV has said it will use a Western supplier to build the core 5G mobile network.

But both Germany and Poland have refused to follow suit.

One of the big fears has been that Chinese 5G technology might come with so-called "backdoors" the Chinese government could employ to spy on other countries under the directives of national security laws.

Huawei points out that no backdoors have ever been found and maintains its independence from the Chinese state.

But New York Times national security correspondent David Sanger told CBC News that interference would not be that easily detected.

"The nature of these networks is such that you might not see that evidence," said Sanger, whose book, The Perfect Weapon, traces the rise of cyber weapons.

"5G is very little dependent on hardware, it's mostly a software layer ... so it's not as if there's one piece of software that somebody could examine and it would remain the same. Like your iPhone, it would be constantly updating itself into new versions and you might not see changes that ended up diverting data."

So how will all this end?

5G is coming regardless.

But the question remains as to who will provide the underlying technology.

No matter what countries like the United States do to keep Huawei at bay, Sanger says, the company will ultimately play a huge role in the future of 5G.

"We have to get accustomed to a world in which Huawei will control a good number of these networks. And by definition, the United States is going to have to connect into those networks because you can't have a global communications system where American or European equipment doesn't talk to Chinese equipment," said Sanger.

"[But] it's one thing to be connected to a network and another thing to actually control the infrastructure of that network." 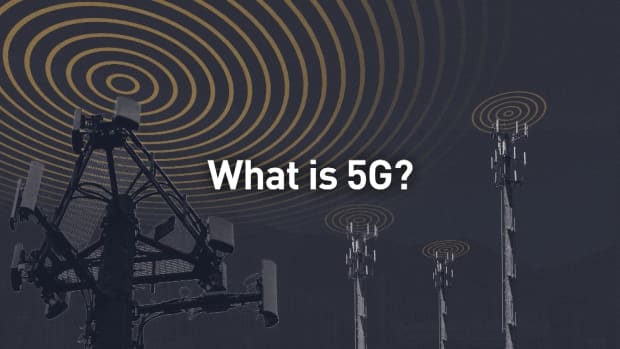