Grisly details of three homicides were laid out Monday before a B.C. Supreme Court jury in Vancouver Monday at the start of a trial of five members of an alleged Vernon, B.C. drug gang dubbed The Greeks. 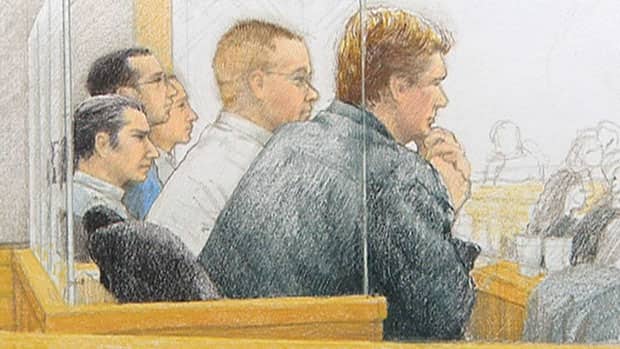 10 years ago
2:11
Five alleged members of an Okanagan, B.C., gang called The Greeks are charged in a murder trial in Vancouver, the CBC's Eric Rankin reports 2:11

Grisly details of three homicides were laid out before a B.C. Supreme Court jury in Vancouver Monday at the start of a trial of five members of an alleged Vernon, B.C. drug gang dubbed The Greeks.

Three of the accused — Dale Sipes, Les Podolski and Sheldon O'Donnell — have been charged with the first-degree murder of Dave Marnuik. Crown prosecutor Peter Favell told the jury that a witness will testify that in the summer of 2004, Marnuik had been duct-taped to a chair, beaten with a bat and hammer, then burned with a propane torch.

Peter Manolakos — the gang's purported leader — has been charged with manslaughter in connection with the death of Marnuik, who was allegedly killed for stealing drugs and money from the crime group.

Sipes, O'Donnell, Manolakos and Douglas Brownell are charged with the first-degree murder of suspected informant Ronald James Thorn in May 2005. Thorn was shot more than seven times along a remote road outside Vernon.

O'Donnell and Brownell are charged with the second-degree murder of Thomas Edward Bryce in November 2004, Bryce — an alleged drug-dealing rival of the gang — was beaten with a baseball bat before being run over by a car.

Before the Crown began his opening statement, Justice Bill Smart had warned the seven-man, five-woman jury that the year-long trial would be "emotionally demanding," with evidence that would likely be "graphic and disturbing."

The trial is expected to hear from more than 100 witnesses and involve between 200 and 300 exhibits.

Defence lawyers cautioned the jury to beware of Crown witnesses, who themselves will admit to committing murder and may have signed deals to testify.

The Greeks, as RCMP officers had named gang members while investigating them, allegedly operated out of a non-descript Vernon pizzeria, working with the Hell's Angels to supply cocaine and heroin throughout the Okanagan and Alberta.

The five accused were arrested in 2006, with the long-delayed trial moved to Vancouver over security concerns.

The legal proceeding is being held in the same highly secured downtown Vancouver courtroom as the Air India bombing trial in 2003 and 2004.