Vancouver city council is set to discuss its ambitious 30-year plan to overhaul the Downtown Eastside today. Its goal is to reform the neighbourhood without pushing out any of the 18,500 people who call it home. 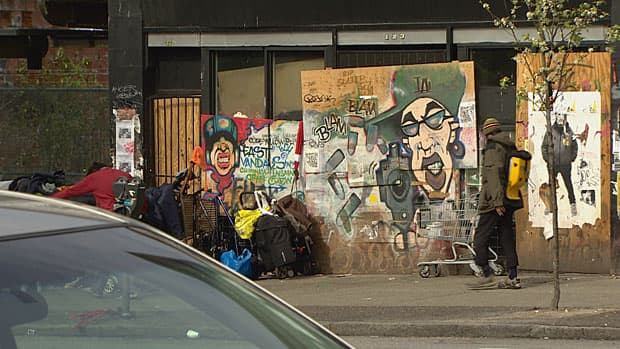 7 years ago
2:10
The Oppenheimer District along Hastings is the most challenging 2:10

Vancouver city council is set to discuss its ambitious 30-year plan to overhaul the Downtown Eastside today. Its goal is to reform the neighbourhood without pushing out any of the 18,500 people who call it home.

The community plan is budgeted to cost just under $1 billion and calls for social housing units, along with affordable market housing, and increased residential and retail — opening the door to developers  without increasing density.

But it is facing attacks on two fronts.

Local business owners say the city did very little consultation with affected community groups. Low income residents are worried the plan will push them out of current housing and want assurances it comes with jobs for them.

The Carnegie Community Action project is presenting council with two petitions totalling 6000 signatures demanding the plan provide for the creation of more housing, more jobs and a slowing of the rate of gentrification by giving low-income residents a say in the approval of new business licenses.

But the city claims the whole purpose of its plan is to improve the lives of the people already living there.

The neighbourhood's low-income history is something planners say they have taken very seriously, after spending two years consulting with residents and the people who work with them.

One half of the plan's 10-figure budget will have to come from outside the city's coffers. The city says other levels of government, non-profits. faith-based groups and the development community will need to get on board to make it a reality.