B.C. health officials have confirmed another 1,933 cases of COVID-19 over the last three days, a weekend which also saw 17 more people die of the disease.

B.C. health officials have confirmed another 1,933 cases of COVID-19 over the last three days, a weekend which also saw 17 more people die of the disease.

The number of patients in hospital with the disease caused by the novel coronavirus is at 277, another new high, with 59 people in intensive care. There are now 7,360 active cases of the virus across B.C.

Provincial Health Officer Dr. Bonnie Henry became emotional during Monday's briefing, as she addressed the growing spread of the virus in long-term care and assisted living, saying the majority of those who died this weekend were seniors and elders living in long-term care.

She said it is urgent for everyone to do their part to reduce their social interactions and get the spread of this virus under control, but also offered reassurance that health officials and members of the public. have the tools and the knowledge to do that.

"I say this to fuel that fire of determination and resilience that I have seen in people across this province," Henry said.

Monday's update included six new outbreaks in the health-care system. There are now 54 active outbreaks in long-term care and assisted living and six in acute care units of hospitals.

Meanwhile, Northern Health says 41 employees at the LNG Canada worksite in Kitimat have now tested positive for COVID-19, up from 14 last week.

The majority of the new cases announced Monday — about 89 per cent — continue to be in the regions covered by Vancouver Coastal Health and Fraser Health.

To date, 27,407 people in B.C. have had confirmed cases of COVID-19 and 348 people have died. There are now 10,200 people in isolation and under active monitoring by public health workers because of exposure to the disease.

'The next leg is not in sight'

The weekend was the first in B.C. under a long list of public health orders and recommendations that came into effect on Thursday.

The orders, which include mandatory masks in indoor public spaces and social gatherings that are restricted to members of the same household, will be in effect until at least Dec. 7. All indoor and outdoor events of any size have been suspended — that means popular events like the Stanley Park Christmas Train and VanDusen Botanical Garden's Festival of Lights in Vancouver have been put on hold.

Henry clarified Monday that despite some confusion over the weekend, movie theatres must also close for now.

Watch | Provincial Health Officer Dr. Bonnie Henry compares the pandemic to an Ironman competition and says we're only on the second leg of the race: 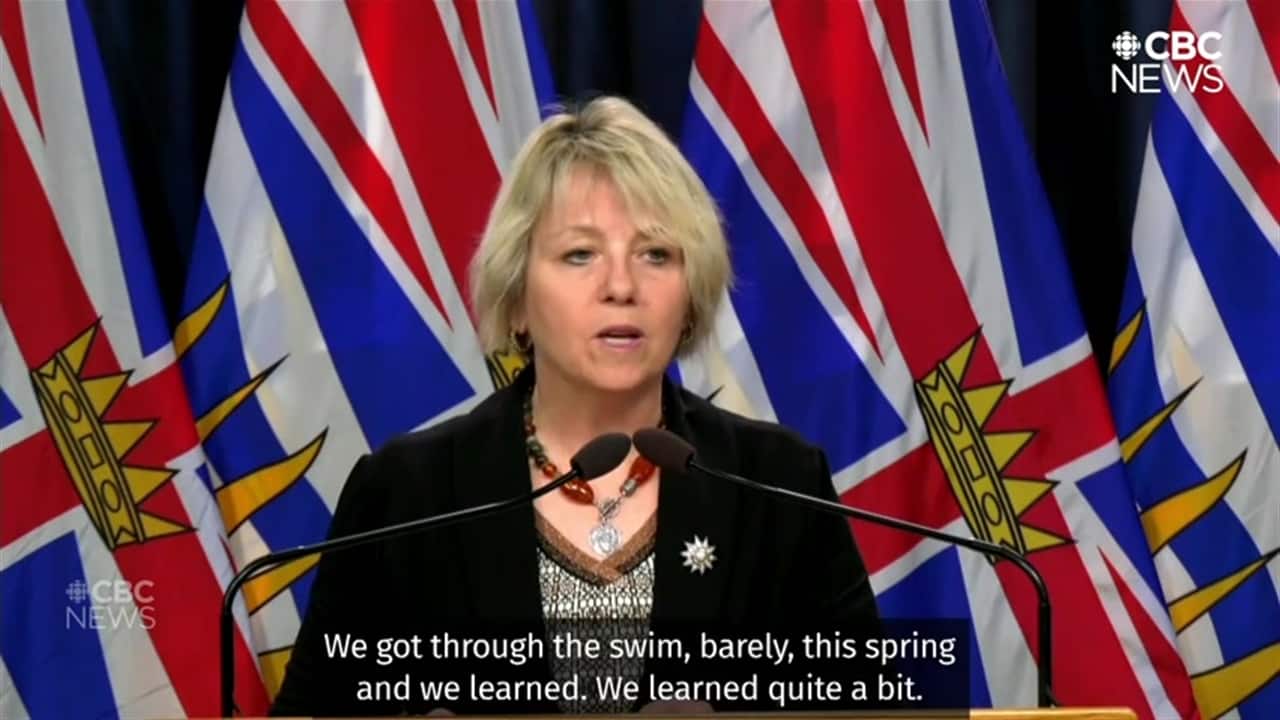 Initially, stricter orders to slow the spread of COVID-19 only included the Vancouver Coastal Health and Fraser Health regions, which were seeing a disproportionate spike in case numbers.

Monday marks 16 days since Henry enacted those first regional orders. It takes at least 14 days, the incubation period for COVID-19, to be able to determine whether those measures are working.

"We got through the swim — just barely. And now we're on the bike ride and we've got some big hills to climb ahead of us," she said.

"Right now, we have a distance to go. The next leg is not in sight."

The final leg of this pandemic will only come when a vaccine is available, Henry explained.

Social gatherings in B.C. are now restricted to household members only. That means no one should be meeting for social reasons with anyone outside of their immediate household, although a physically distanced walk with a friend or arranging for grandparents to pick up the kids from school is still acceptable.

People who live alone can create a small exclusive "bubble" with one or two others, Henry has said.

Health Minister Adrian Dix said Monday that there can be no bartering or compromise when it comes to the orders that are currently in place.

"We cannot negotiate with the virus. We can't deal with it that way — there's no litigation to be had," he said.

In response to questions about how much notice event organizers might receive about when they're able to reschedule because the current orders are being lifted, Henry said she didn't have an answer.

"Things we were able to do in the summer — we had a buffer, we had the weather on our side. We can't get away with that anymore. We will see if that is going to make a difference over the next coming weeks," she said.

The new mandatory mask mandate is a requirement for workers and members of the public to wear face coverings in all retail environments, restaurants and indoor public spaces, including common areas of workplaces, except when eating or drinking.

The order for mandatory masks does not include schools.

Henry said Monday that schools aren't public places where strangers can come and go at will. Instead, the same people are spending time together every day.

However she said that masks are encouraged within school environments, particularly for adults.

With files from Roshini Nair