'All about the money': How women travelling to Canada to give birth could strain the health-care system

Women travelling to Canada to give birth to babies who will automatically become Canadian citizens are prompting concerns about the strain they may be putting on the health-care system, The Fifth Estate has found.

Women travelling to Canada to give birth to babies who will automatically become Canadian citizens are prompting concerns about the strain they may be putting on the health-care system, The Fifth Estate has found.

Canada is one of fewer than three dozen countries that follow the practice of citizenship based on birthplace, regardless of parents' nationality or status.

At one British Columbia hospital with a high concentration of such deliveries, complaints have arisen that the influx of these non-resident patients — also known as birth tourists — has led to compromised care for local mothers-to-be and struggles for nursing staff.

Some of these patients fail to pay hospital and doctors bills, leaving taxpayers and individual care providers on the hook.

"Most of them, they get the Canadian passport, and then they leave the country," said Dr. Mudaffer Al-Mudaffer, a B.C. pediatrician and neonatologist who sees babies of non-residents when they need critical care. "It affects the integrity of the fairness of the health system."

No statistics are available regarding how many people are travelling to Canada specifically to ensure their child is born here and will have a Canadian passport.

But figures from the Canadian Institute for Health Information and several Quebec hospitals indicate there were about 5,000 non-resident births across the country in 2018, an increase of nearly 15 per cent over the previous year.

In the fall of 2019, Cathy Shi arrived in Richmond, B.C., from Shandong, on China's east coast, to give birth to her third child. She said through a translator that she wanted her unborn child to have more opportunities.

"My concern is about their education, such as going to university. If the kid wants to live in Canada, it would be convenient for them if they're born here."

At this point, the practice of birth tourism appears to be concentrated in a handful of hospitals in Quebec, Ontario and British Columbia.

At the Richmond Hospital, south of Vancouver, non-residents make up nearly a quarter of all births, according to records obtained from Vancouver Coastal Health, the health authority which runs the hospital. In many ways, that hospital can be seen as a test case for how this issue could play out elsewhere as numbers continue to climb.

The health authority declined a request for an interview with The Fifth Estate and issued a warning directing its staff not to speak to the media.

Despite that, four current and two retired nurses shared their concerns, requesting that their identities be protected.

Since 2013/14, the number of non-resident births has tripled at the hospital. The patients — many from China — pay privately for their care, often in cash, may not speak English and are unfamiliar with the Canadian health-care system. The nurses who spoke to The Fifth Estate say the influx has led to increased workloads and has compromised care.

"There are times when ... the people living here don't get the service that they need," one nurse said.

When the unit was very busy, one nurse said services like prenatal tests to check the baby's health, labour inductions and other tests to check fetal and maternal risk factors would be delayed or cancelled.

"We would often have to decide whose need was greatest and abandon the rest for the next day where we would face the same situation again," she said.

"Our normal scheduled or add-on C-sections lie here all day and then they take the IV out, we send them home and say come back tomorrow. A private pay never goes home — she gets her C-section that day," said another nurse.

"She will be fit in somewhere because nobody wants to lose that $5,000. But our normal people are lying there all day, no food or drink, waiting and nobody's interested in moving them."

Some hospitals, like Sunnybrook Health Sciences Centre in Toronto, have taken steps to limit the number of non-resident births in order to prioritize residents of their own communities. That hospital says it won't treat non-residents patients without Ontario Health Insurance Plan coverage.

When asked in an email why the Richmond Hospital doesn't have a similar policy, Carrie Stefanson, a public affairs representative with Vancouver Coastal Health, said: "VCH cannot speak for other hospitals or health authorities. VCH will never deny urgent and emergent care based on ability to pay or where a patient is from."

The hospital requests deposits for privately paid births: $10,000 for a vaginal birth and $16,000 for a caesarean. More than $18 million has been invoiced for non-resident births since 2017, according to data released through freedom of information by Vancouver Coastal Health.

Nursing staff say they have not seen this money go into easing their workloads.

"The amount of money that's coming into Richmond from the private pay, it doesn't make our staffing better," said one nurse.

Their union says that is a problem.

She said the union has regularly heard complaints from nurses at Richmond Hospital but they have not filed a formal complaint with the hospital.

The health authority declined to answer a question about how it has responded to complaints from nursing staff.

Financial incentives within the medical system

Two doctors at the Richmond Hospital have delivered 1,300 of the 2,206 babies born to non-residents there since 2014, according to documents released through freedom of information.

While the health authority will not disclose their names, insiders and birth tourism company representatives say Dr. Xin-Yong Wang and Dr. Brenda Tan, two Mandarin-speaking family doctors, see the majority of these patients for prenatal care and delivery.

Both appear on multiple websites of companies advertising services such as assistance with immigration, travel and housing to women looking to come to Canada to give birth.

Wang said the companies do not have permission to use his name.

Tan did not respond to interview requests and a list of questions sent to her.

Wang and Tan billed the province $272,198.50 and $428,456.17 respectively in the 2018/2019 fiscal year, according to data publicly available through the province. Those billings do not include earnings from non-resident patients because they pay privately.

There are no limits on what physicians can charge outside the public system in British Columbia, but information from birth tourism company websites suggests that these doctors earn at least $100 per prenatal visit and more than $2,500 for a delivery, several times more than could be billed through the public system for the same services.

In an interview, Wang declined to respond to questions about how much he was earning from birth tourism but said he was not motivated financially to take on these patients.

"It's like a dessert — occasional patients like this is fine, and it's pretty financially rewarding … they are a small percentage of our overall income."

Nurses who spoke to The Fifth Estate said the financial incentives within the health-care system are a problem.

"It is all about the money. If there was no financial income for the hospital or physicians, the private pay would have been out of the door a long time ago," said one nurse.

While these births are bringing in money, bills owed to both health authorities and individual doctors are not always paid.

According to documents released by Vancouver Coastal Health, more than $2 million is outstanding as a result of non-resident births since 2017 at the Richmond Hospital alone. This does not include any debt that has been written off.

Births at the Richmond Hospital represent 11 per cent of overall non-resident births outside Quebec, according to 2018 data from the Canadian Institute for Health Information.

No national financial data exists on how much revenue is outstanding as a result of non-resident hospital bills across the country.

But some say the health-care system and Canadian taxpayers are losing out.

Al-Mudaffer said having an uninsured baby in neonatal intensive care can cost $10,000 a day just for the hospital bed, not including doctors' fees. 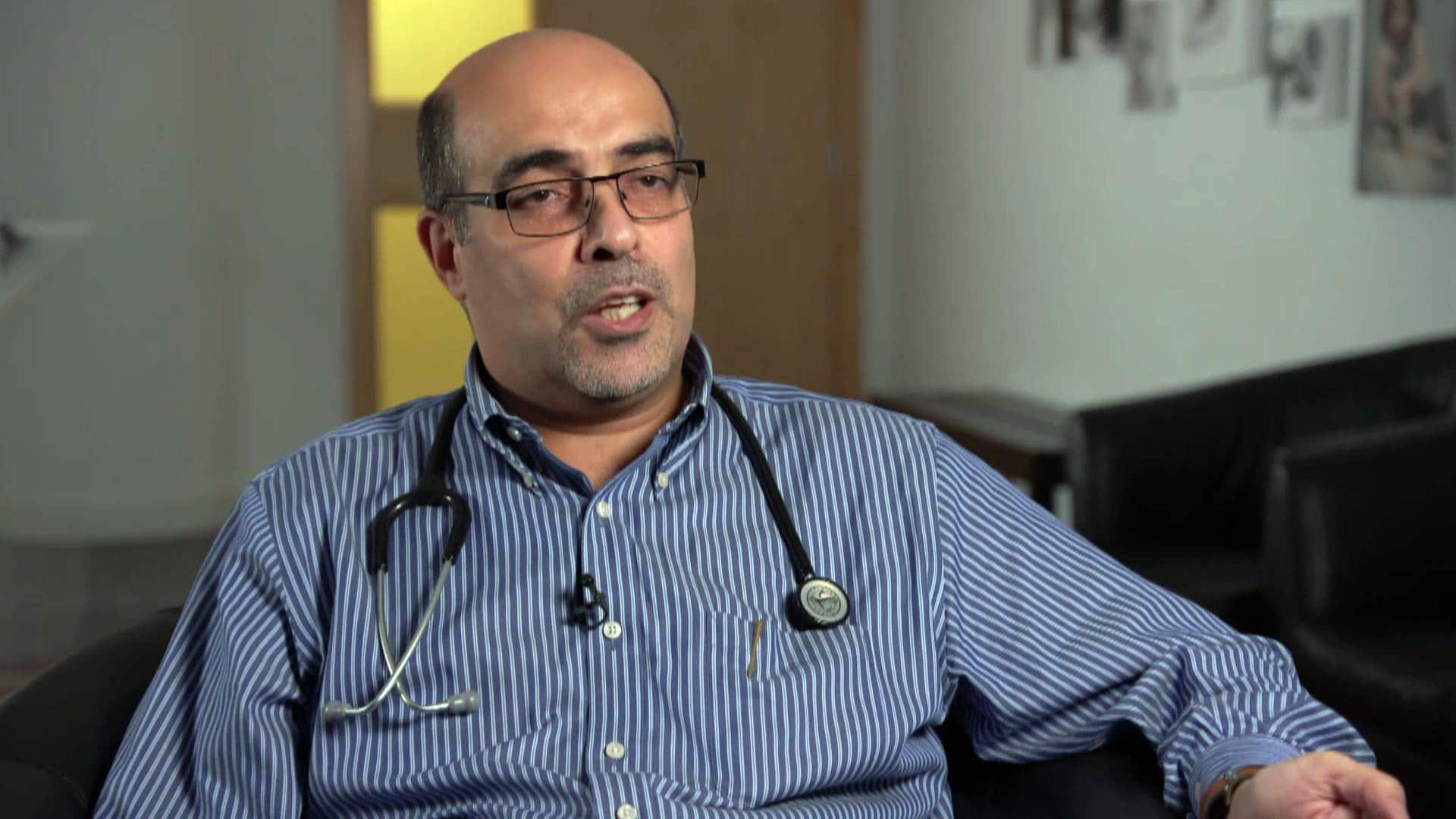 He said he's seen large bills for families with babies requiring multiple nights and even weeks in the NICU.

"You can easily acquire a bill of $100,000 to pay the health authority, and that's why they can't pay it, you know? And they leave the country without paying," said Al-Mudaffer.

He said he has seen hundreds of thousands of dollars in bills go unpaid at the Royal Columbian Hospital where he works, but Fraser Health, which runs that hospital, said it could not confirm this amount.

The Fifth Estate requested provincial numbers on unpaid bills from the British Columbia government but was told these numbers were not tracked provincially.

"Obviously if any bill is unpaid, I'm concerned about that because that's money that we could and should be spending on something else or saving the health-care system so of course we're concerned about it," said B.C. Health Minister Adrian Dix.

Even with little formal research to examine the practical implications of a growing number of non-resident births on the Canadian health-care system, Dix said "we are handling that situation.

"It's two per cent … of total births in British Columbia, so it's an issue but there are other issues."

But it's not only hospital fees going unpaid. Al-Mudaffer said when he sees birth tourists, he only gets paid three out of 10 times.

He is not alone. Dr. Kathleen Ross, president of Doctors of B.C., has personally been affected by unpaid bills and has called for a national conversation on the issue.

"Our federal government needs to find a way to disincentive people coming to the country to have access to citizenship and to our health-care support," she said.

Marco Mendicino, the newly appointed minister of immigration, refugees and citizenship, declined an interview with The Fifth Estate.

But the department wrote that while "statistics indicate that birth tourism is not widespread, the Government of Canada recognizes the need to better understand this practice."

It said it has started work with the Canadian Institute for Health Information and Statistics Canada to integrate health and immigration data that would allow for a better understanding of the practice of birth tourism by looking at visitor visas and births.

Immigration, Refugees and Citizenship Canada anticipates results from this research will be available in the spring.

Cathy Shi said she hasn't thought much about criticism of birth tourism and isn't receiving any government benefits here.

"We may come here often for travelling around, living or even investing. People are not just looking for status by having a baby here. They will have established a connection to Canada and later on some may apply to immigrate."

Annie Burns-Pieper is a freelance investigative reporter and producer. She has a particular interest in themes of gender equality, public safety and health.