Back to school? For some Canadian kids, that was weeks ago

Students and teachers in year-round schools say they see important benefits, but very few communities in Canada have adopted the model. 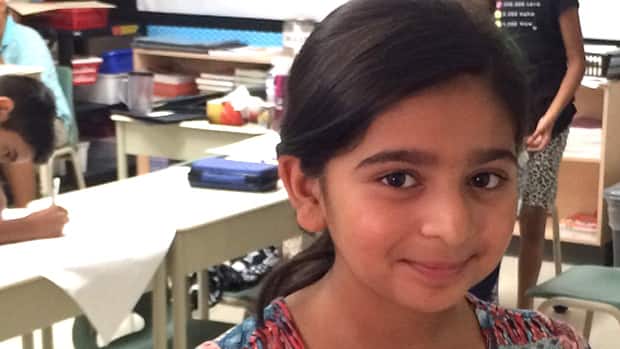 How do kids feel about starting school in August?

4 years agoVideo
0:54
Students at Roberta Bondar Public School tell CBC News how they feel about going to a year-round school​ 0:54

It's back to school for students in Quebec today.

Aug. 31 might seem like an early start for the many kids in other parts of Canada still clinging to the remaining days of summer vacation as Labour Day looms.

But for a tiny minority of students who attend year-round schools, the bell actually rang weeks ago.

On a sunny August day, students at Roberta Bondar Public School in Brampton, Ont., stand in a hallway lined with backpacks and sing O Canada. Most of them don't seem to mind too much that that they're headed for class at 8:30 a.m. instead of lazing about like many of their peers.

"I feel jealous because I'm sleepy and she gets to sleep [in]," Bhavya Modi, 8, said of his 15-year-old sister who goes to high school and doesn't start until September.

But his envy quickly disappears each day.

"When I get to school, I'd rather be at school," Bhavya said. "It's fun meeting my friends."

Plus, the summer weather means he can "play outside in the sun" during lunch and recess, the Grade 3 student cheerfully points out.

Roberta Bondar is one of about 150 public schools across the country that start the year in August and end in late June.

Under the year-round schedule — also called a "modified" or "balanced" calendar — students spend the same number of days in the classroom as those following the "traditional" calendar, but their vacation days are distributed throughout the year.

Depending on the school, the summer break is shortened from two months to between a month and six weeks, and students get more time off during the December holiday and March Break, as well as a week's vacation in October.

"Kids retain more," said David Tran, a Grade 6 teacher at Roberta Bondar. "The breaks are not long enough that they forget classroom expectations, school expectations. So they're ready to learn immediately after the breaks."

One of his students, Namrata Nandam, 11, moved from a school with a traditional schedule. It took some getting used to, but Nandam says she now prefers the more frequent breaks she gets throughout the year.

"The summer is a bit shorter, but it's fine because you get like more holidays on other days," she said. "You don't feel ... overwhelmed with like schoolwork, so I think that it's really good."

Making the transition the other way — from the year-round system to the traditional system — has proven somewhat challenging for 15-year-old Nashita Ahmed.

Nashita went to Roberta Bondar for elementary school, but all the high schools in the district still follow the standard calendar.

"It's actually really tiring because throughout the semester you actually need more breaks," the Grade 10 student said. "I really wish that my school was a year-round school."

But those kinds of anecdotal observations from teachers and students have yet to be backed up by scientific findings, according to the Canadian Education Association, a not-for-profit organization that advocates for research-driven improvements in the school system.

President and CEO Ron Canuel says the limited Canadian research on year-round schooling has been "inconclusive."

At one point several years ago, there was "a lot of discussion about year-round schooling" in Canada, largely stemming from research conducted in the U.S., he said. The one "quite definitive" aspect of the American studies focused on the benefits for children from lower-income families.

Canuel said the research found those students tend to have more trouble recalling information after a long summer vacation than their more well-off peers.

The findings could indicate that students from higher-income families have more opportunities to continue "experiential" learning during the summer, such as camp activities or educational outings, he said.

A pilot project by the Peel District School Board found the year-long calendar at Roberta Bondar school was also beneficial for English as a second language (ESL) students, according to a report issued by the board in 2010.

Most of the students speak a language other than English at home, even though many of them were born in Canada, said principal Sheryl Johnston.

"If they've been home for nine weeks [for summer vacation] and haven't heard and haven't been able to practise English, that is part of a unique learning loss," she said.

Despite the positive reviews, year-round schools account for less than two per cent of the country's more than 10,000 public schools.

In some jurisdictions, including Saskatchewan, Manitoba, Nova Scotia, New Brunswick and Prince Edward Island, provincial legislation or regulations dictate the school year must begin in September.

Alberta, on the other hand, has 129 schools on a year-round calendar, by far the largest number of any province or territory. Ontario has 12.

Jacki McLaren, principal of Taradale School in Calgary, says the key to successfully introducing a year-round school to a community is consultation with parents beforehand.

Many parents see the benefit of "maintaining momentum and the rhythm of the year," she said.

​When British Columbia changed its legislation in 2012 to allow individual districts to set their own school calendars, school boards consulted with parents to gauge their interest in year-round schooling.

"Perhaps surprisingly to some, the appetite hasn't really been there," said Glen Hansman, president of the B.C. Teachers' Federation, noting that some teachers would choose to work in year-round schools, depending on their family circumstances and lifestyles.

According to the B.C. Ministry of Education, only five out of the province's roughly 1,600 schools have adopted the year-round calendar.

"Canadian families by and large still like their summer vacations and the family bonding and opportunities that go along with it," Hansman said.

Another issue, he said, would be access to child care for working parents during longer vacations throughout the year.

"We're not at the point where the broader society would be able to operate where, let's say, a whole school district went to a year-round calendar system."

But that would never be the plan, said Roberta Bondar principal Sheryl Johnston.

"I don't believe it would ever be the intention of a school board to have every school on this calendar," she said.