Autumn Peltier, a 13-year-old from Manitoulin Island on Georgian Bay, delivered a strong message to the United Nations General Assembly that the world needs to stop polluting its water.

It's time to "warrior up," stop polluting the planet and give water the same rights and protections as human beings. That's the message Autumn Peltier, a 13-year-old Canadian, delivered personally to the United Nations General Assembly on Thursday.

"Many people don't think water is alive or has a spirit," the Anishinaabe girl from Wikwemikong First Nation told the diplomats gathered in New York City in her speech on World Water Day. "My people believe this to be true.

"Our water deserves to be treated as human with human rights. We need to acknowledge our waters with personhood so we can protect our waters."

The five-foot tall teen  from Manitoulin Island, Ont., stood on a stool behind the podium so she could reach the microphone. 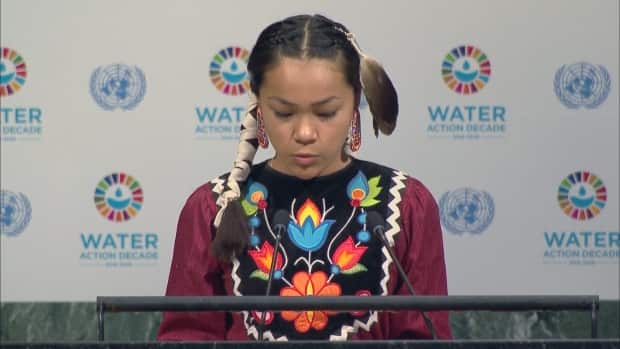 She had been invited to speak as the "representative of civil society," joining UN Secretary General Antonio Guterres and other international dignitaries for the launch the UN's International Decade for Action on Water for Sustainable Development.

"By 2050, at least one in four people will live in a country where the lack of fresh water is chronic or recurrent," Guterres said during his address.

States need to better manage and preserve world water resources, he said. More than 2.1 billion people already lack safe drinking water at home, according to UN figures — and that includes people in Canada.

"No one should have to worry if the water is clean or if they will run out of water," Peltier said in her speech. "No child should grow up not knowing what clean water is or never know what running water is.

"We all have a right to this water as we need it — not just rich people, all people."

Brenden Varma, spokesperson for the president of the General Assembly, said "it's definitely not very common to see a 13-year old girl addressing the 193 member states of the United Nations."

Varma said hearing Peltier give such a heartfelt address was a treat for everyone in the room.

Henk Ovink described Peltier's speech as inspiring and "in our faces as leaders of the world." The special envoy for international water affairs for the Netherlands said collaborating with those who will inherit the Earth is essential.

"It's the young that can help us leap forward, so we have to listen to the young and implement their ideas," Ovink said.

Peltier told CBC News after her address that she wasn't nervous speaking in front of the General Asembly.

"I felt like they all wanted to hear what I had to say, and I felt heard," she said. "It's just a great feeling to be speaking in front of world leaders."

She said it took her three days to write the speech, which she very nearly didn't get to deliver.

Autumn's mother, Stephanie Peltier, said she was in the middle of an email purge when the UN invitation arrived. "I said this is probably a scam, and I almost deleted it."

Then their flight from Toronto to New York was cancelled three times. So she and her mother ended up driving all the way — a 15-hour trip.

"I am really proud," said Stephanie Peltier, who is a single parent. "I never imagined I'd be sitting here with her speaking at the United Nations."

This wasn't Peltier's first speech. The resident of the Wikwemikong Unceded Territory has become a well-known advocate for safe drinking water for Indigenous communities and clean waterways in Canada.

She attended the 2015 Children's Climate Conference in Sweden, is the only Canadian nominated for the 2017 Children's International Peace Prize, and had a tearful encounter with Prime Minister Justin Trudeau in 2016 where he promised to take steps to protect water in Canada.

"We are working to ensure that ‎everyone has access to safe, clean, and reliable drinking water," Louise Blais, deputy ambassador at the Canadian Mission to the UN, told CBC News on Thursday. That includes working with First Nations communities to ensure their water is safe to drink.

Blais described Peltier's address as a further "call to action" for nations around the world to protect water for future generations.

Experience of a lifetime

Peltier herself is a very composed and thoughtful teenager. Her mother says people often aren't sure how to take her.

"My mom even used to call her little old woman girl," said Stephanie Peltier. "Sometimes, we joke around and tell her to smile a little."

The 13-year old insists she has a social life outside of her activism, but that pollution and water scarcity scare her. "With what Mother Earth is going through right now, imagine that in 10 years," the Anishinaabe teen told the delegates at the UN on Thursday.

"Where I come from I am so fortunate — I can still drink the water from the lake."

She pointed out that many others around the world, and even across Canada, can't do that, including several communities near hers that have had boil-water advisories.

"I actually cried about it. And it makes me really mad when I think about it," she said in an interview at her home prior to the UN visit. 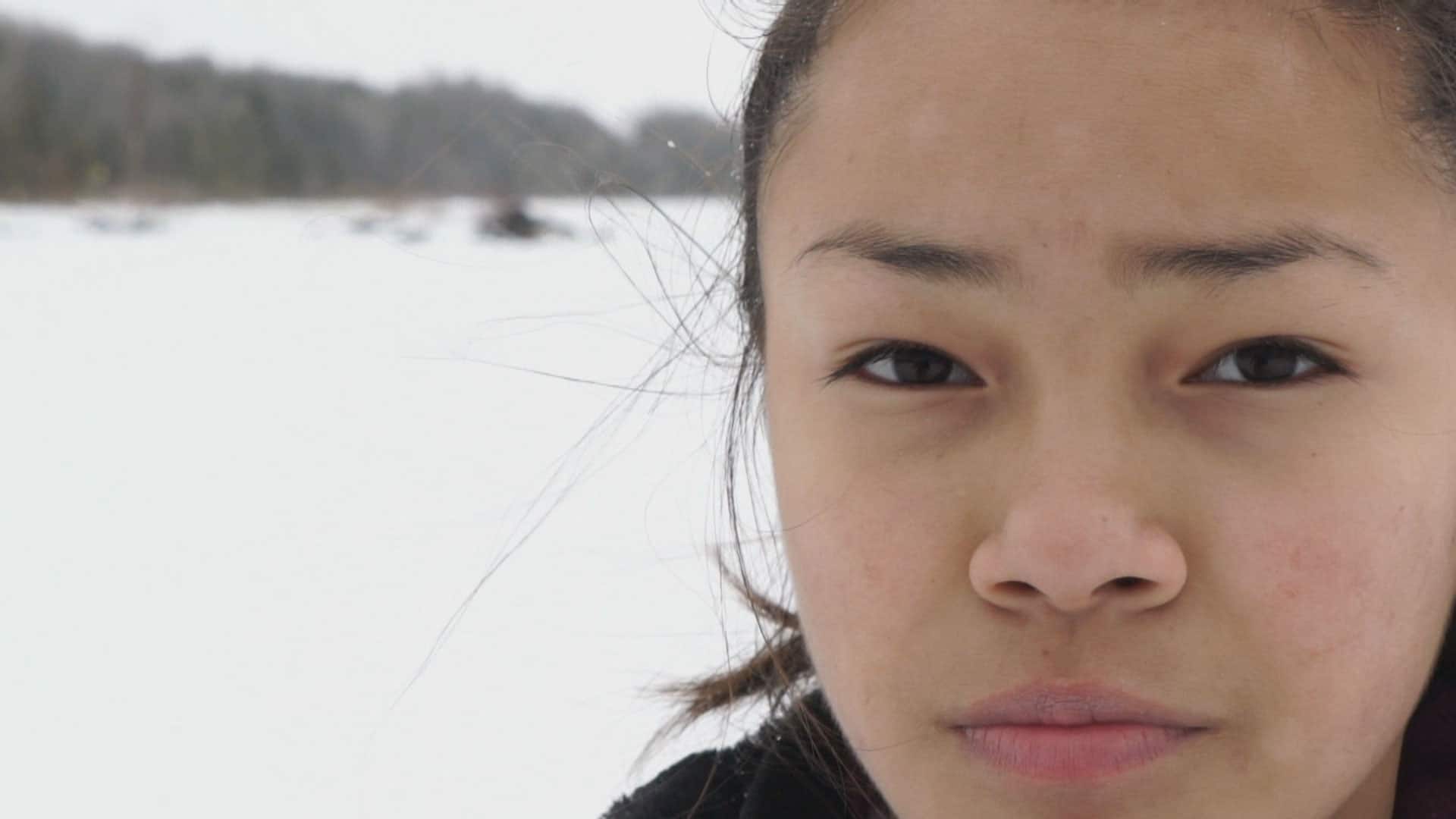 3 years ago
7:53
She is the teen fighting to protect Canada's water — meet 13-year-old Canadian Autumn Peltier. She speaks bravely, confidently and passionately, and as a so-called water walker, Peltier pleaded with Justin Trudeau to protect Canada’s water. Now she is gearing up to speak at the United Nations for World Water Day 7:53

She has continued to speak out about the problems, even in the face of bullying from some of her peers at school.

Her mother has ensured her children follow their traditional path of water protection by instilling a strong sense of identity and culture. Autumn said she was also inspired by her great-aunt Josephine Mandamin, who trekked the shores of all five Great Lakes to bring attention to issues threatening Canada's largest natural resource.

"What I've been told through ceremonies is Mother Earth has been surviving for millions of years without us. And it's taken us less than a century to destroy her — and Mother Earth doesn't need us, but we need her," she said.

Peltier said she has already received a lot of positive feedback from people in the audience at the UN who heard her speech, which she hopes will translate into action.

"This was the experience of a lifetime."

Peltier left the gathered international dignitaries at the UN with this message: "One day I will be an ancestor, and I want my great-grand-children to know I tried hard to fight so they can have clean drinking water." 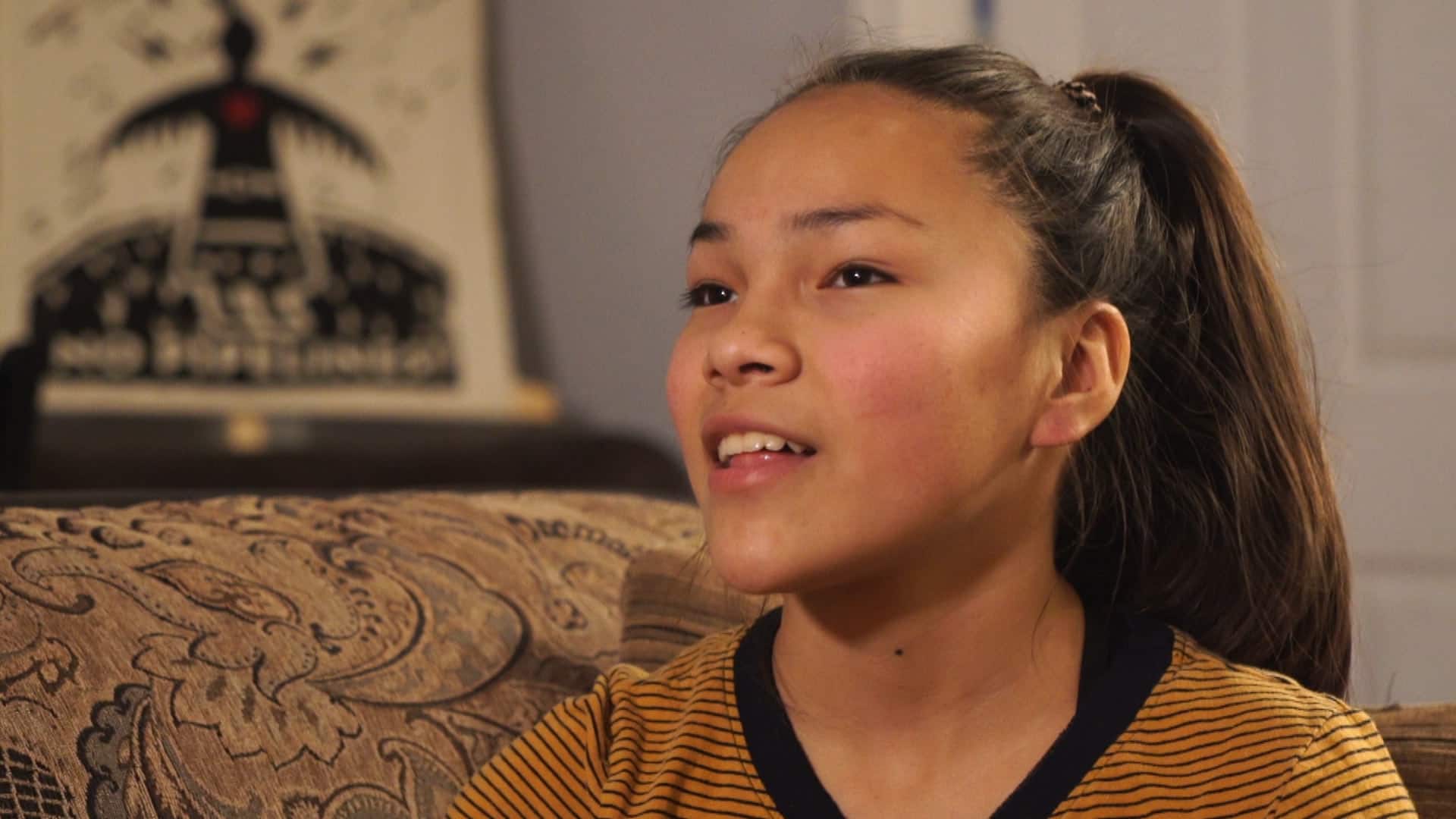 Autumn Peltier on being a teen role model

3 years ago
0:22
CBC's Rosemary Barton asks 13-year-old Canadian water activist Autumn Peltier how she feels about being a role model for some of her peers 0:22CBC News asked Autumn Peltier what being a water advocate means to her, and what her advice would be for young people who want to follow her example as a "water keeper." Here's what she said:

My experience as a water keeper is more of an honour to the water and Mother Earth. Doing this work is very spiritual, and I feel connected to the water in spirit.

I also am proud to represent my people, and especially my community.

I enjoy meeting new people and travelling to new places and learning about their issues and seeing if I can help in some way. I hope I am making a difference for our future and our great grandchildren.

If you want to become a water keeper:

Melissa Kent is a producer with CBC News covering the United Nations from its headquarters in New York City. @KentUNCBC

With files from Rosemary Barton and Mia Sheldon