Alexandre Bissonnette’s attack on a Quebec City mosque in 2017 that left six people dead could and should have been prevented, an investigation by The Fifth Estate suggests.

Alexandre Bissonnette's attack on a Quebec City mosque in 2017 that left six people dead could and should have been prevented, an investigation by The Fifth Estate suggests.

Threat assessment experts have found there are tell-tale signs before perpetrators take action, and that there are often events that trigger the violence.

"I can't tell you on a specific date and a specific time that this guy is going to go do something, but I can look at it just like a doctor would look at somebody with the symptoms that they're presenting when they show up at the office."

Wyman's unit of a dozen people in suburban Washington, D.C., has deconstructed more than 60 mass shootings between 2000 and 2013.

"Looking into the mind of a mass shooter, going back and trying to understand ... what they were thinking, what was driving them down the ultimate pathway to an act of targeted violence or terrorism, is important," said Wyman.

On Jan. 29, 2017, Bissonnette, who was 27 at the time, calmly walked into the Islamic Cultural Centre in Quebec City and opened fire just before 8 p.m.

A few minutes later, six worshippers were dead. Five others were injured.

Bissonnette's actions left his family struggling to understand what had brought him to that point.

"How could we have known that an unthinkable tragedy was about to occur?" Bissonnette's father wrote to The Fifth Estate during a six-month exchange of emails. 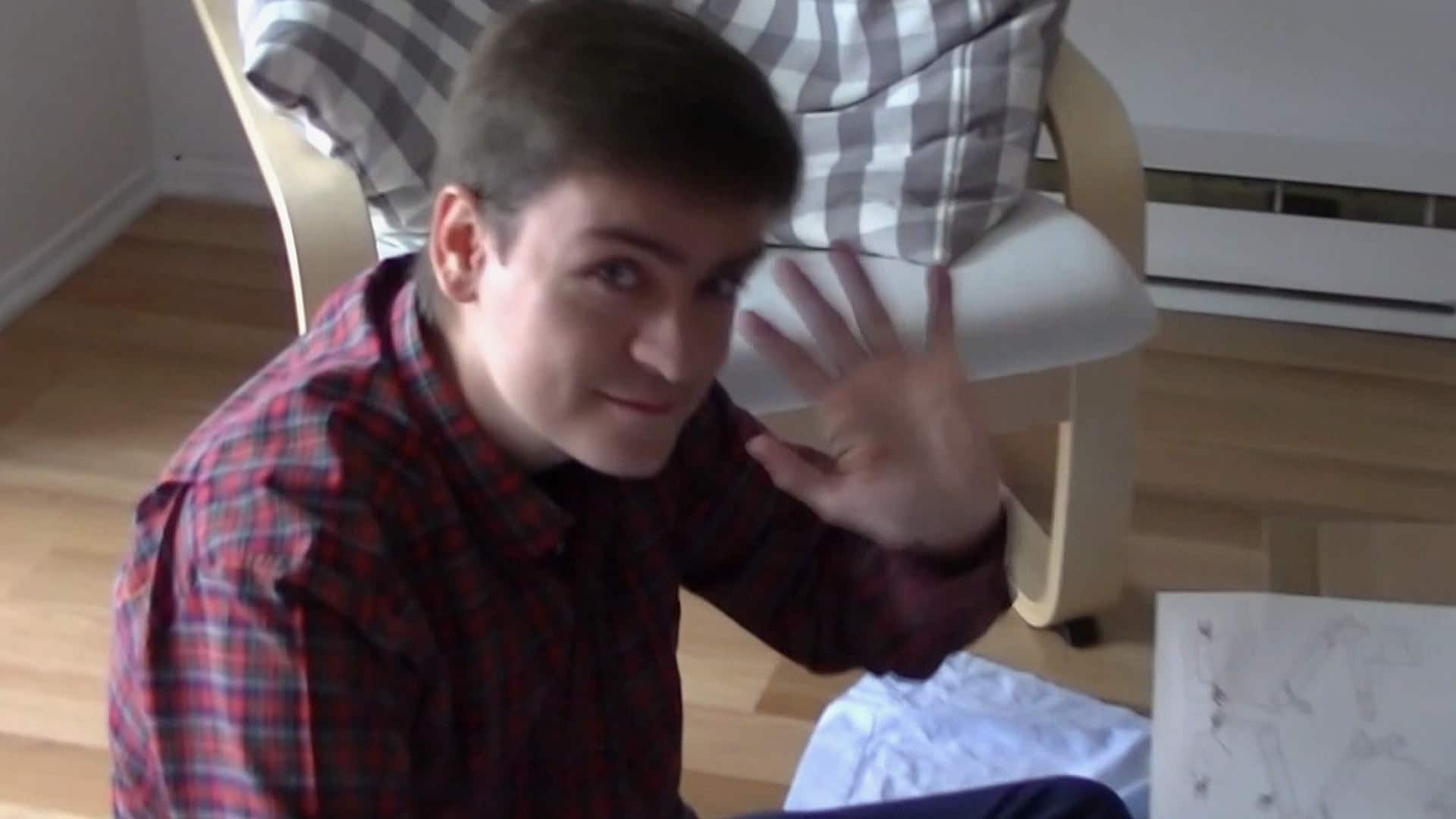 1 year ago
0:37
Alexandre Bissonnette is seen in his younger years 0:37

During the ongoing exchange, which also included a conversation at his home, Raymond Bissonnette discussed various aspects of his son's life and the period leading up to the shooting.

"That night, some unthinkable culmination of many things got underway somehow and robbed Alexandre of who he was," he wrote on May 22, 2019.

"During his whole life, until January 29th, Alexandre never displayed violent behaviour in words or in actions towards anybody.

"Alexandre is the very last person that we, and all those who know him, could ever fathom doing something so out of character."

But experts say the tell-tale signs of an impending attack are always there.

And they were in Bissonnette's case.

"That's why it's so difficult to put Alexandre Bissonnette somewhere, because he's kind of in the middle of these two phenomenon, and I think it's stuff that we are seeing much more right now."

The centre, a not-for-profit organization, was created in 2015 as part of an initiative by the Quebec government.

Last year, it received around 200 phone calls from concerned family members and friends. Following analysis, 12 of those cases were deemed serious enough to be referred to the police.

For all other cases, the centre works with the community as well as social and health services to put in place a personalized intervention plan addressing all the issues radicalized individuals might have.

It was only after Bissonnette was arrested that psychiatrists and psychologists were able to interview him and chronicle his descent into darkness, providing rare insight into the mind of a murderer.

"It was a little bit strange because it was difficult to imagine that the person in front of me did that," forensic psychologist Marc-André Lamontagne told The Fifth Estate.

He spoke with Bissonnette for seven hours at the Quebec City detention centre in April 2018, and was one of four mental health professionals who evaluated him.

Bissonnette told Lamontagne that he was mercilessly bullied for years in school.

"He reported that he tried to respond to the [bullies] mainly by speaking [to them], but he was isolated," said Lamontagne.

"Clearly he felt that he has been treated unfairly, that he didn't deserve to be bullied that hard. He also developed a negative vision of others."

Bissonnette's father said that even after changing schools, his son continued to be bullied.

"Realizing that nothing was getting better, Alexandre simply stopped mentioning it to us. I cannot tell you how much I regret not having done more to make sure Alexandre was safe at school," Raymond Bissonnette wrote.

Ducol said there were many moments "where we collectively failed" in Bissonnette's case.

"He was not given the adequate resources for what he was looking for. We failed when he was demonstrating all these behaviours online. So it's an accumulation of failures that we all collectively have to bear."

The psychiatric assessments reveal that Bissonnette developed a drinking problem in his late teenage years and had suicidal thoughts. But he also had wild ideas about seeking revenge on his tormentors.

"He had fantasies like setting the school on fire and things like that. But he also reported that at that time, those ideas, those thoughts, were associated with sadness [and] depressive thoughts," Lamontagne said.

In 2014, Bissonnette was introduced to firearms by a friend. He went on to apply for a licence, falsely reporting he had no history of mental health issues or suicidal thoughts. Over the next few years, he would go on to legally acquire six guns.

His father said he thought sport shooting was a healthy hobby for his son.

Around the same time, Bissonnette learned about the shooting at Columbine High School in Colorado. In 1999, two teenagers entered the school just before lunchtime and killed 12 students and a teacher.

The psychiatric reports and the RCMP's search of Bissonnette's computer showed that he developed a fascination with that attack.

That fits a pattern that the FBI's Wyman has found with other mass shooters.

'Most important event of their life'

Wyman said their acts are not "impulsive."

Instead, they're meticulously planned partly by studying previous attacks.

"For many of them, it is a very important, if not maybe the most important event of their life. So they want it to go right," Wyman said.

"They want to see, in their mind, what other people have done to achieve whatever goal it is that they're seeking. And they can model their behavior off of them."

Nine weeks before the mosque attack, Bissonnette put two handguns in a backpack and went to the Place Laurier mall in Quebec City.

He contemplated opening fire on unsuspecting shoppers but stopped short because he thought he had been seen by cameras, the psychiatric reports reveal.

According to Wyman, mass shooters experience several stressors in the year prior to an event.

They are "things that were going on in their life that were causing them significant disruption to their ability to cope with their day-to-day events.... This is a personal experience for them and the stressor itself may not make sense to you or me, but it darn sure makes sense to the person experiencing it," he said.

In December 2016, Bissonnette had issues at work that exacerbated his stress and left him on a month-long medical leave from his job finding blood donors for Héma Québec.

That night, Bissonnette told his parents he was going to the gun range for target practice.

He'd been drinking all day, but he stopped at a convenience store to buy a vodka cooler, according to the psychiatric report.

Bissonnette waited in the parking lot of the mosque until he was ready. He walked in as Sunday night prayers were wrapping up and fired 48 bullets.

In 2018, Bissonnette pleaded guilty to six counts of murder and five of attempted murder.

He was sentenced last February to life in prison with no possibility of parole for 40 years.

The Quebec director of criminal and penal prosecutions appealed the sentence, asking for 50 years without possibility of parole, arguing Bissonnette had made no effort to rehabilitate himself.

Bissonnette's lawyers are also appealing the judge's decision, asking for the minimum sentence of 25 years without possibility of parole.

In recent days, they sent The Fifth Estate a message about Bissonnette.

He "is now getting support and treatment by professionals to address his mental health problems," they wrote. "He is still living every day with regrets and hopes to one day atone for his wrongdoings."

If you are worried about someone you know, you can call:

Marie-Hélène Hétu is a CBC journalist based in Montreal. She has worked for the CBC's Fifth Estate and Radio-Canada's Enquête.