Evacuations ordered in Alberta, Saskatchewan due to grass fires

Roads closed due to thick smoke in high winds

Two trains went flying and another caught on fire in southeastern Alberta; trucks went off the road on major highways; countless roads were closed due to thick smoke; and some buildings burned north of Calgary and on the Siksika First Nation.

Mounties went door-to-door telling about 500 people to "get out" of the town of Gleichen, which declared a local state of
emergency.

In Saskatchewan, the town of Leader was among the communities being evacuated from the southwestern area of the province due to a fire burning near the Alberta-Saskatchewan border. The town of more than 800 residents declared a local state of emergency.

'We could be in a problem'

"We're not sure if it's going to hit here or not," said town councillor Albert Heck. "We really don't know how the fires are doing at this point. It's quite a few miles away yet, but a little bit of change in the wind and we could be in a problem."

He said residents had mostly gone to the neighbouring communities of Kindersley or Swift Current.

"The smoke is mostly going still south of town, so we don't have a whole lot of smoke here yet. So that's a good sign for us, because usually the way the smoke goes is the way the fire is going to go."

Town officials said on Twitter that the evacuation order would stand until at least the morning and that the local hospital's emergency department would remain closed until then.

"Still very windy," said the tweet. "No power. Please get a good night's rest. Threat to town is less but could change at a moment's notice with this type of wind. Hope this helps ease some minds."

Meanwhile, residents of the Sharp Hill neighbourhood near Airdrie just on the northern outskirts of Calgary and people near the town of Coleman in the Crowsnest Pass were also told to leave their homes.

One section of Coleman has been evacuated, while the remainder of the town is on standby to evacuate.

As the evening progressed, Rocky View County announced on its Facebook page the Airdrie-area fire had been brought under control and crews were looking for hotspots. Residents were being escorted home to assess their property.

"The situation is significantly improved," confirmed RCMP Cpl. Curtis Peter, but he said there had been some structural damage.

"One home has been totally lost. Another home has been partially lost and fairly significantly damaged, and a third has damage to outbuildings."

He said officials were unsure about when evacuees might be allowed to go home.

"They are working on checking the damage to infrastructure right now and then that'll be how they determine what happens next."

The flames and smoke prompted safety officials to close Highway 3 between Coleman and the British Columbia boundary.

Near Strathmore, Alta., Peter said a train caught fire near the Agrium Plant which in turn created a grass fire due to the extreme winds. He said the train did not derail and no injuries were reported.

Canadian National reported two trains did derail in Alberta, and the winds were being investigated as a factor.

Both incidents involved cars carrying mixed freight, and there were no reports of spills or leaks of dangerous goods, and no reports of injuries.

Const. Chris Bilodeau of the Wainwright RCMP said five cars went over a high trestle bridge near the hamlet of Fabyan.

"It's over the Fabyan valley, which is pretty deep," he said. "It happened on the west side of the bridge, so only five cars made it onto the bridge. Those five cars fell off of the bridge and down into the valley."

Social media was also alight with reportings of vehicles being blown off the road, like the tweet of Riversdale Hey who said he'd "seen seven trailers flipped between Airdrie and Leduc. Lost a visor ... to boot."

Elsewhere, evacuations were ordered in the hamlets of Schuler, Hilda and Moon River Estates. An evacuation of Siksika First Nation was cancelled but provincial officials said there was "structural damage."

There was a brief scare in the city of Lethbridge when an evacuation alert was issued for one neighbourhood because of a grass fire in a nearby coulee, but that was later lifted and the fire was extinguished.

In Medicine Hat, fires werern't a threat but the winds caused power outages and damaged trees and brought down power lines throughout the city.

Evacuations were also ordered in Burstall and Liebenthal, Sask., and in the southern rural municipality of Deerforks.

There, some who stayed behind said the situation seemed to be improving as the night went on.

"Right now it's still windy, but there's a bit of improvement with the smoke," said resident Vipul Patel. "I see some vehicles, they are coming back."

​Jackie Penny, who farms north of Burstall, said she was driving toward the town to help fight the fire when she was forced to turn around.

"It just enveloped the sun. You couldn't even see the sun in some spots, and there were leaves flying and tumbleweeds. It was crazy," she said. 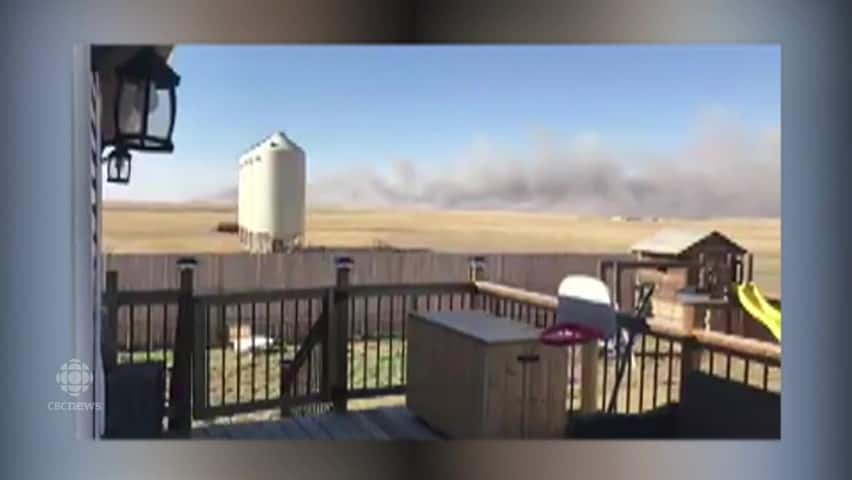 3 years agoVideo
0:13
Chelsi Bader shared this video of a grass fire that has evacuated Burstall, Sask. 0:13

"I've never seen anything like that in my life."

Joseph Kwak, owner of the Burstall Hotel, said all his customers left after the evacuation was ordered, but he joked he would call them in the morning and tell them to come back.

Many of the schools in the Leader and Burstall areas said classes would be cancelled for Wednesday.