The billionaire financier behind the Wind Mobile cellular telephone company says he regrets getting involved in Canada in the first place. 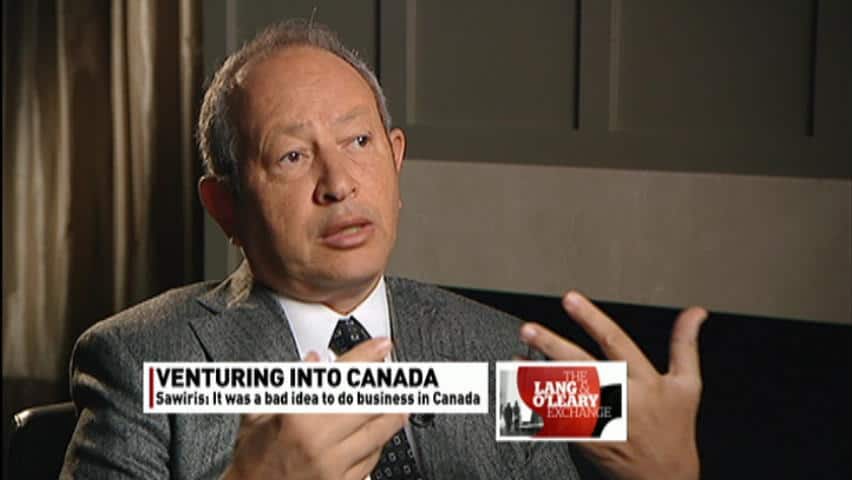 The billionaire financier behind the Wind Mobile cellular telephone company says he regrets getting involved in Canada in the first place.

That's one of several revelations made by Naguib Sawiris, the Egyptian founder of the Orascom media conglomerate, in an interview with the CBC's Amanda Lang.

Orascom provided much of the financing for Globalive's Wind Mobile service when the brand launched in 2009.

"It was a bad idea," he said in the interview, which aired on The Lang & O'Leary Exchange at 7 p.m. ET on Thursday.

Globalive, headed by Canadian entrepreneur Anthony Lacavera, has a complex ownership structure under which the Canadian equity owners control the company, but Orascom put up more than 80 per cent of the funding.

That raised the ire of telecom incumbents Rogers Communications Inc., BCE Inc. and Telus Corp. which complained to the CRTC that the company doesn't adhere to Canada's stringent foreign ownership rules.

After a lengthy process, Canadian officials eventually ruled that Wind was within the rules and was allowed to launch a cellular service in late 2009.

Canada is the only country in the world, besides China, that hasn't opened up to foreign direct investment for foreign capital, Sawiris said. "I don't know why Canada wants to be matched with China," he said. "There's only two countries [with] very ridiculous old laws, and nothing is happening."

"There's no real political will here to introduce competition into this closed market," he said.

Sawiris spent roughly $500 million in a wireless spectrum auction in 2008 to get the necessary space on airwaves to launch a cellular service. The federal government set aside a certain percentage of that spectrum specifically for new entrants, in the hopes of spurring competition.

Another spectrum auction of more powerful 700 MHz frequency auction is coming up, but based on his Canadian experiences thus far, Sawiris says Wind won't be bidding on any new spectrum.

"We would like to, but these are not fair rules," he said. "Our position is clear: if they don't set aside, we won't bid for it — why would we go in and just increase the price so the government makes more money and we get devastated," Sawiris said.

"You need to ask yourself, why isn't Rogers in the U.K., like Vodafone or France Telecom," he said.

"Why aren't they everywhere if they're so good? The answer is simple, here they're protected. They can be inefficient, their cost structure can be expensive."

He says Wind helped bring down cellphone prices by an average of 30 per cent across the board. He says the three incumbents all have virtually identical ARPU numbers — an acronym meaning average revenue per user, or the amount of money they get from each customer. That's an indication of a market with no competition, he says.

"Why would an Egyptian like me be in 25 countries, and a big company [stay] here? Because they're pampered," he said. "How can you create innovation if you close up yourself like that? What's the argument? I don't see it."

Wind Mobile added 45,000 new customers last quarter, bringing its subscriber base to 317,000 in total. That's an impressive growth rate, but still a long way off the 9.1 million wireless customers Rogers has, or the 7.3 million at Bell or 7.1 million at Telus.

Sawiris says he isn't afraid of competing with the big boys — but Canadian competition rules make that impossible.

"We are trying to help [consumers] and not because we are good guys — because we want to make money," he said. "We want to come here and earn with hard work, but we are encountering nightmares," he said.

He says wireless prices remain higher than they should be on the retail level. "If they can reduce their prices 30 per cent, why didn't they do that before we came?" he asked.

"And how will they continue after we leave? If we leave, maybe prices will go up to where they were."