'It's none of their business': The Wet'suwet'en people who want the protesters to stop

The Wet'suwet'en Nation is divided over whether to support a new natural gas pipeline through its territory.

At public meeting in Houston B.C., community members explain their support for the project

Another day of blockades across the country means more protesters with signs bearing slogans such as "Wet'suwet'en Strong" and "Stand with Wet'suwet'en."

They're showing support for the hereditary chiefs who oppose construction of a new pipeline through their territory in northern B.C.

The protesters though are drawing the ire of many in the Wet'suwet'en Nation who not only support the project, but see it as a way for the community to flourish.

The Coastal GasLink pipeline would move natural gas from northeastern B.C. to the West Coast for export, while creating jobs and other financial benefits.

It's why 20 elected First Nations signed their support of the project. Calgary-based TC Energy is developing the $6-billion pipeline.

Overall, the Wet'suwet'en Nation is divided over whether to support a new natural gas pipeline through its territory.

A group of hereditary chiefs touched off the national protest by opposing the project, saying it violated their recognized rights over the territory.

But on Wednesday, about 200 people gave up three hours of their afternoon to pack a movie theatre in the community of Houston, a town of about 3,000 people in northwestern B.C., in the heart of the Wet'suwet'en Nation.

WATCH | Members of the Wet'suwet'en Nation speak at a pro-pipeline event: 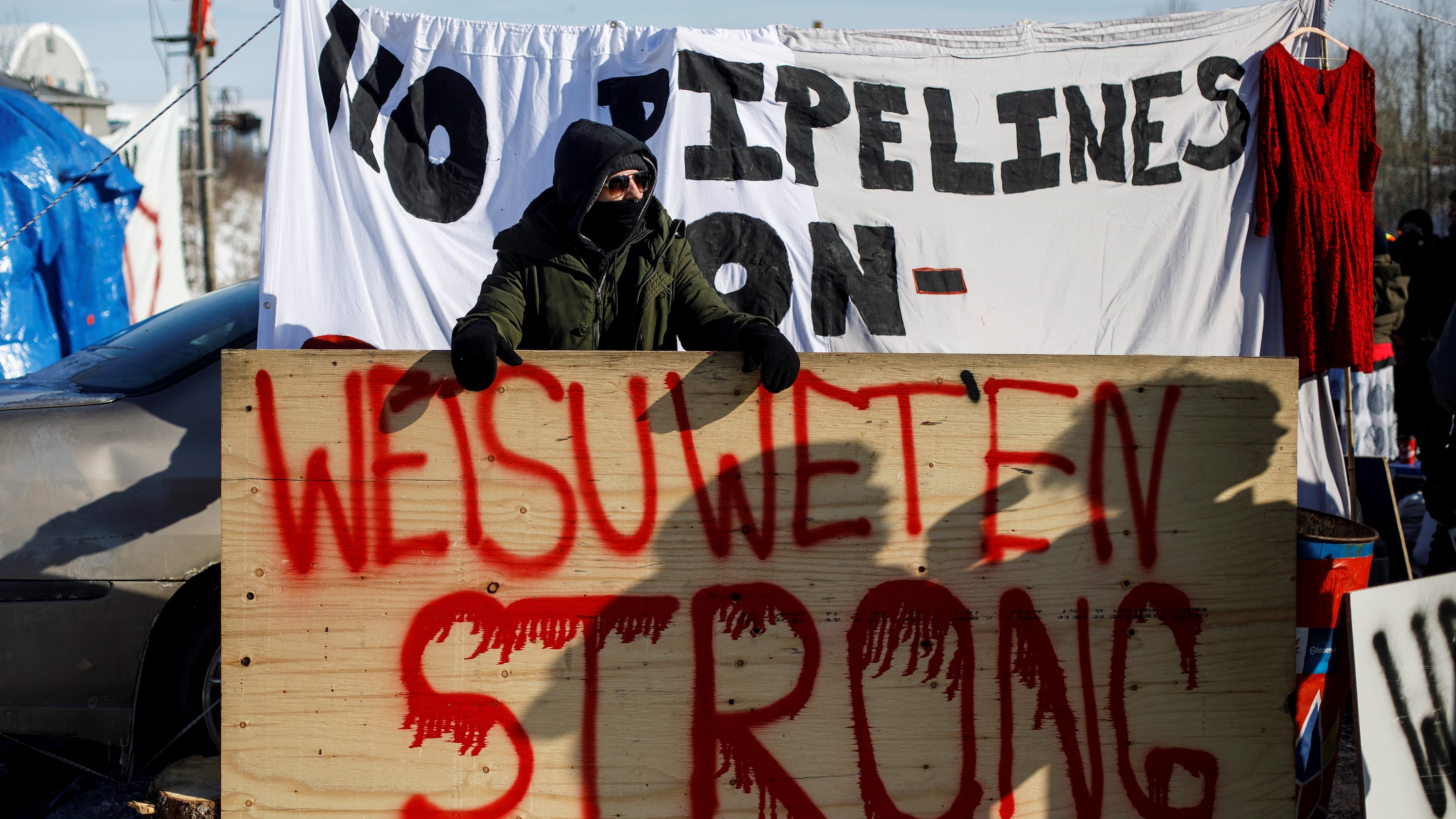 Community members in B.C. come out in support of pipeline

1 year ago
1:31
At a community meeting in Houston, B.C., support was strong for the contentious Coastal GasLink pipeline. 1:31

This was a pro-pipeline event as members of the Wet'suwet'en Nation explained why they support construction of the Coastal GasLink pipeline.

The people who came out to the meeting say they want to see the natural gas pipeline built. They say the project will create well-paid jobs that will bring economic opportunities to their communities.

Among the supporters was Robert Skin, who said he was elected to the council of the Skin Tyee First Nation, which is part of the Wet'suwet'en Nation, to move the community forward.

He said the pipeline will mean a better life for the next generation.

"With the benefit agreement that [the Skin Tyee] did sign, I see us being in a better place even within the next five years," Skin said.

Speaking to the crowd at the theatre, he said protesters "only get one side of the story" and don't understand the advantages this type of infrastructure project can provide.

Similar sentiments were shared by others who want to see more people working and providing for their families, especially as the lumber industry struggles in the region.

Others said they want the First Nation to be part of Canada, not separated from it.

The nearby Witset First Nation, which is also part of the Wet'suwet'en Nation, is split almost evenly between those who want the pipeline to be built and those who resist it, according to Edward Tom, a community liaison and monitor of construction projects.

Tom sees the project as improving the community's quality of life. When discussing the protesters, he grew agitated, describing them as liars who are causing more harm than good.

"They're very pugnacious and overbearing. They're professional protesters," Tom said.

Many who attended the meeting said the protesters across the country don't understand the issue, and don't realize many of the Wet'sewet'en want the project to be built.

Those who have spoken up about their reasons for backing the pipeline say they have faced intimidation and threats by other community members.

That's why the event was the first time Marion Tiljoe Shepherd has shared her feelings. She owns her own trucking company in Houston. She's optimistic the project will be built and the economic benefits will provide a financial boost to her business and many others in the area.

Shepherd said she's increasingly angered by the protesters across the country. She said they don't speak for, nor represent her community.

"It's none of their business," she said in an interview following the event. "All of these protesters don't have the right to close down railways and ships. It's not right. Go away. I want them to leave."

The pipeline dispute is also splitting families, with some supporting the project and others opposing it.

Here's Marion Tiljoe Shepherd and her frustration with the protesters across the country: <a href="https://t.co/kayrUKFq9E">pic.twitter.com/kayrUKFq9E</a>

"It's divided my family. It's just so sad," Shepherd said. Her father's cousin is a hereditary chief. At the Houston meeting Wednesday, he spoke in favour of the pipeline.

On Thursday, four Wet'suwet'en hereditary chiefs are scheduled to travel east to meet and thank the Mohawks of Tyendinaga behind a rail blockade in Ontario. The trip has raised doubts about when proposed talks with federal and provincial leaders could occur to settle the rail crisis.

Currently, those chiefs are refusing to negotiate until RCMP leave the area.

"The chiefs don't feel that we can possibly have any meaningful dialogue with any levels of government while there is still a huge RCMP force on our territories," said Molly Wickham, a spokesperson for one of the Wet'suwet'en Nation clans.

On Wednesday, Carolyn Bennett said in an open letter that she and her B.C. counterpart, Scott Fraser, will be available in northern B.C. as early as Thursday to meet with any of the hereditary chiefs who might be willing to talk.

Some provincial premiers are demanding the blockades come to an end either by peaceful resolution or police action. 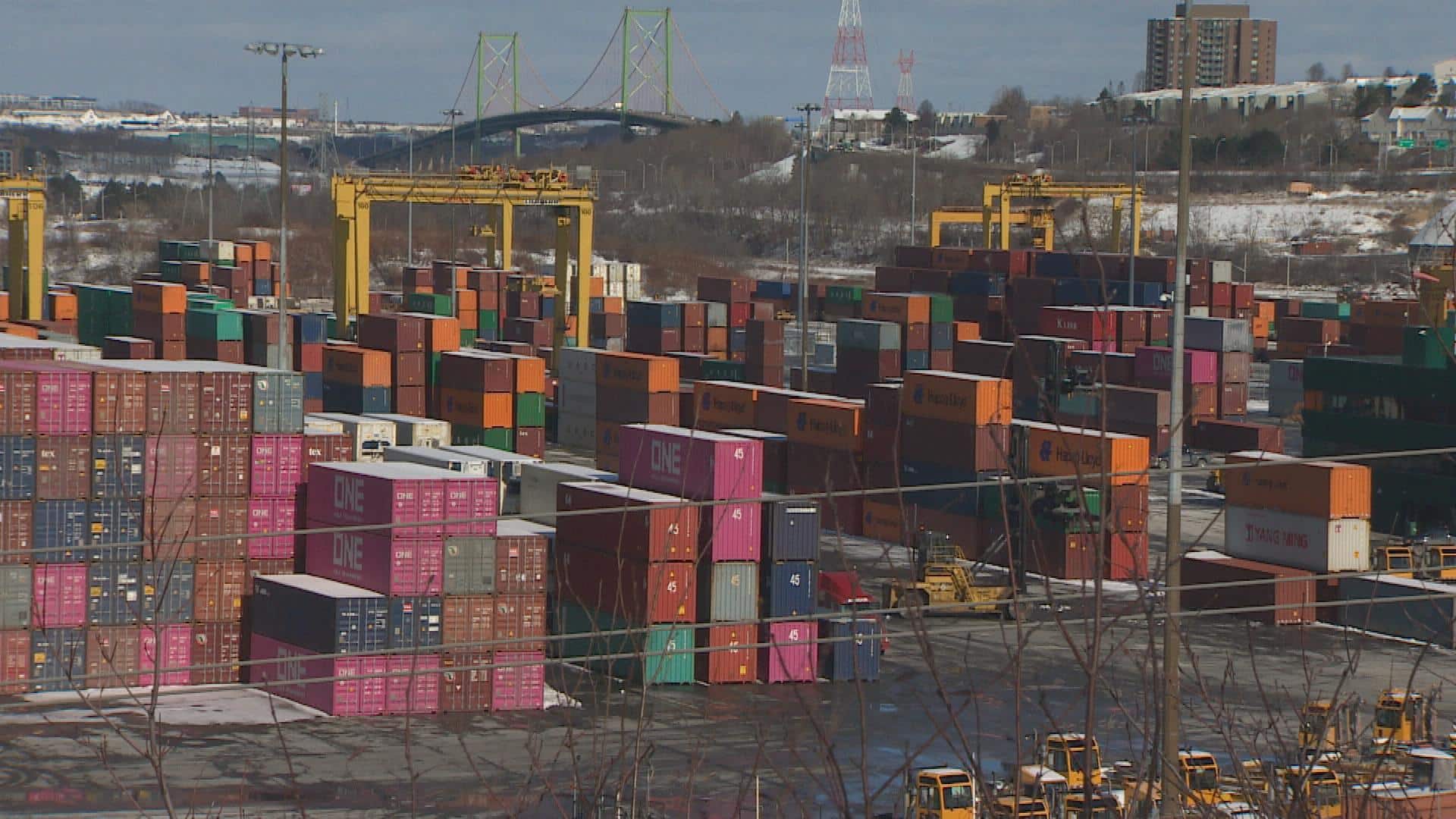 Cargo being diverted from Canada due to blockades

1 year ago
2:44
Atlantic Container Line diverting ships from Halifax to the U.S. due to blocked rail traffic. 2:44