WestJet has gotten off to a rocky start with its flights to London, England. Mechanical issues, rescheduled flights and delays are plaguing the route, a problem that could end up being very expensive for the airline.

Delays and cancellations are plaguing the airline's routes to London, England

On June 23, Kellie Power flew from Seattle to London, England, to get married. She booked a flight with WestJet; first leg from Seattle to Calgary, the next leg onto London's Gatwick airport.

It did not go well.

Power's flight from Seattle to Calgary had its departure time changed to earlier in the day. Calgary-based WestJet called to notify her, but she didn't answer. When she arrived at the airport, the flight had already taken off and Powers had to spend the night at a hotel in Seattle.

If they're compensating people at the rate I got, basically, they've been flying people across the Atlantic for free- Darryl Wilson, WestJet passenger

She arrived in London a day later than planned, but the worst wasn't behind her. When Kellie and her new husband Oscar Power flew out of Gatwick back to Seattle last Monday, the flight was delayed by more than four hours, which caused them to miss their connection.

"We got to the airport and waited six hours for our flight," said Power. "They scheduled us for a new connection, but the already delayed flight was delayed further. We sat on the tarmac for an hour, so missed our new connection as well.

"That was the last flight out of Edmonton, which was where our layover was, so we ended up having to spend the night in Edmonton. We ended up getting into Seattle 18 hours later than we initially planned."

To sum up, a day-long delay going out and a nearly day-long delay coming home. A particularly rough experience, especially for a wedding trip. But the Power's story is emblematic of a problem with WestJet's London route, which has been in operation for just over two months.

Airline forums are heavy on complaints. One forum, on airliner.net, has a thread dedicated to WestJet's Gatwick route. Many angry passengers have taken to Twitter, with one theme: delays, schedule changes, and cancellations.

WestJet announced its service to London a little more than a year ago, its first overseas destination for the four wide-bodied Boeing 767 jets that it bought from Qantas. Those jets have an average age of 24 years, which is the core of the problem. They began to have mechanical problems. 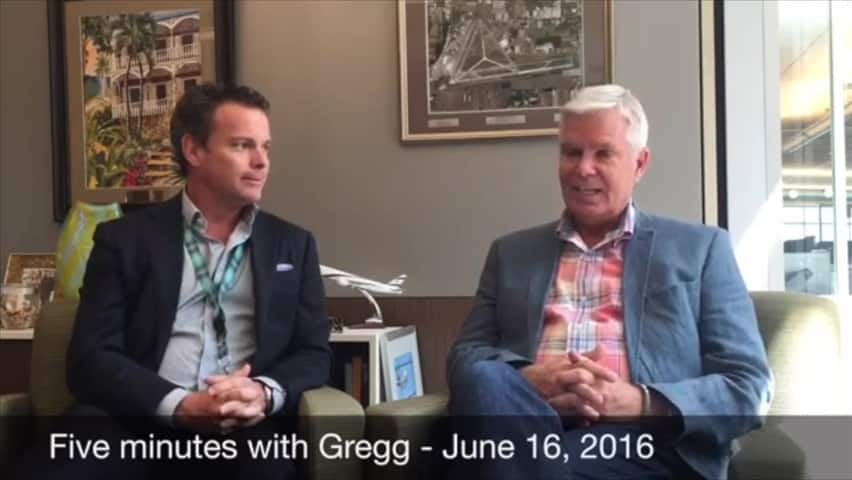 5 years agoVideo
2:16
Gregg Saretsky faces a challenge as delays and cancellations are plaguing the airline's routes to London, England. 2:16

"The 767s have been giving us lots of grief, lots of mechanical problems," said Saretsky in the video.

"We're finding that when things break, because some of the parts are so old, we don't have them in store. And then we're doing a global search through the AOG desk to find them and then it's taking two or three days to get these things. We don't want to keep them in stock because they break once every 20 years."

The 767s have been giving us lots of grief, lots of mechanical problems- Gregg Saretsky, CEO, WestJet

Saretsky went on to thank front line and other employees who have taken the brunt of passenger dismay and wrangled the booking of hotels and rescheduling of flights.

To ease the situation, WestJet contracted an Omni Air jet to stand in when one of the Boeing 767s needs repairs.

Ian Procter was on one of those flights, an experience that he describes as a bait-and-switch, since he had made plans to use WestJet's in-flight entertainment system for the nine-hour flight from Calgary to London.

Instead the Omni Jet had no personal entertainment system and no WestJet Connect, which is the service that allows passengers to play content on their iPads. The screens were in the middle aisle, there were no power outlets and less leg room than expected.

"We were not even provided with the basic WestJet plane services and leg room,etc," said Procter in an email. "But yet they are allowed to unilaterally change the conditions of the flight we purchased, departure and arrival times, with no notice or compensation?"

In the WestJet video, Saretsky said that the Omni jet would be flying the route, so that the airline would be able to take the four Boeing 767s out of rotation one at a time to check the aircraft. The Omni contract ended July 1.

WestJet's social media team has been active on Twitter responding to complaints. The company said that it's responding to each customer who makes contact.

But its liability is quite a bit bigger.

Darryl Wilson is a travel blogger and aviation buff who booked his flight from Vancouver to London for the very first flight in May. He wanted to take the inaugural flight and did so, documenting the experience on his blog.

Wilson is pleased that WestJet has brought competition to the Canada/Europe routes, but said that the service was lacking. On his way home, his flight was cancelled. He was given the option to wait a day or fly back through Toronto, getting him home late, but at least the same day. The flight was further delayed and he barely made his connection in Toronto, but was at least compensated.

Under the European Denied Boarding and Delayed Flight legislation, Wilson — and anyone else with a delayed flight of more than three hours out of Europe — is entitled to compensation. Wilson received 600 Euros, more than $800, effectively paying for his flight. If his cancelled flight was full, that's approximately $225,000 in compensation for that one flight.

Kellie and Oscar Power, with a flight delayed more than four hours would also each be entitled to 600 Euros under this law.

"It's got to be a big blow to WestJet," said Wilson. "I was not the only one, so if they're compensating people at the rate I got, basically, they've been flying people across the Atlantic for free."

Wilson said that he didn't apply for the compensation and that WestJet contacted him with the information.

In a statement to CBC News, WestJet said that the non-stop service to London Gatwick represents the longest flights WestJet has operated in its 20-year history.

WestJet also said that fewer than five per cent of the flights to London have been cancelled and "In every case we either chartered an aircraft or provided guests with travel on other airlines to ensure the issues with their travel plans were mitigated as quickly as possible."

"This is a temporary situation and we fully anticipate to be operating at our normal performance levels in the near future."

The ramifications may last longer though. Neither Kellie nor Oscar Power have ever flown WestJet before. When asked if she would again, she said no.

"This was my first time with them and my last time."