Now what? How steel and aluminum tariffs will impact Canada

The first shots have been fired in the unexpected trade war between Canada and the U.S., but it's not immediately clear who's going to take the most casualties. Some experts offer a pessimistic view of the future, while others see opportunity.

Experts say the trade war will only escalate: 'It starts with steel and it winds up in Gucci'

The first shots have been fired in the unexpected trade war between Canada and the United States, but it's not immediately clear who's going to take the most casualties.

On Thursday, the U.S. government made a stunning announcement that Canada's exemption from steel and aluminum tariffs, which U.S. President Donald Trump first floated in March, would be revoked as of Friday.

That means the U.S. will now view Canadian steel and aluminum the same way those metals from the rest of the world are viewed — as a potential national security threat.

The Department of Commerce is implementing tariffs on foreign metals under an obscure and rarely used clause of U.S. trade law, one that allows the president to put tariffs on foreign imports when they "threaten to impair the national security." 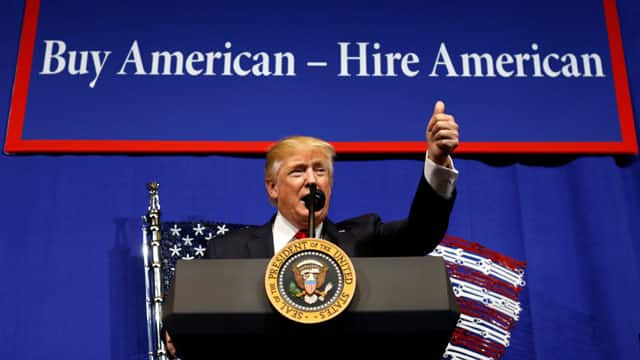 It's a targeted weapon aimed at achieving one of Trump's key political aims: to get American companies and American people, to buy American, make American, and hire American.

'This is big trouble'

For a country like Canada, "this is big trouble," according to Peter Warrian, a steel expert at the University of Toronto.

But the good news, if there is any, is that Trump may have shot himself in the foot — the trade war is only beginning.

The aim of the tariffs is clear: Trump wants more steel and aluminum to be made in America, and he wants U.S. companies to buy it instead of foreign alternatives. But he has a big problem on his hands: America can't possibly make enough of both metals to feed its own insatiable demand.

According to U.S. government figures, that country imported almost 37 million metric tonnes of steel last year. About one-sixth of that comes from Canada. Canada is an even larger cog in aluminum, contributing more than half of the almost five million metric tonnes that the U.S. consumes every year.

That's in part because some of the biggest U.S. steel mills are nearly 80 years old and they aren't capable of making the specific types of steel that go into high-grade technology and aerospace products. U.S. mills mostly import what's known as "semi-finished" steel from places like Canada, Brazil, and Mexico and turn them into finished products they can resell.

It's not as if the U.S. even has the capacity to fill its own need for steel and aluminum. Steel mills take several years to get permitted and built.

"You can't turn them on and off like a light switch," Warrian said.

The White House may be claiming its moves will benefit U.S. consumers and create jobs, but the likely effect is just to raise prices.

"Steel prices are going to go up, and by a lot," Bradford said. "The data that was presented to Trump by the Department Of Commerce was incompetent."

When faced with foreign competitors who are now obligated to raise their prices by 25 per cent, Bradford and others say U.S. companies will likely match that price hike and pocket the difference.

"What happens in the short term is American prices rise and Canadian production falls," Warrian said.

"That's the law of gravity."

Warrian offered an even bleaker alternative of what Trump's tit-for-tat on tariffs may have just unleashed. He imagines a convoy of Canadian trucks loaded with steel and aluminum products is already lining up at the U.S. border facing a new conundrum.

"When you get to the border, whatever the value of your order is, you're going to have to have 25 per cent more in cash, in advance, to get across," he said.

In that example, a U.S. buyer of Canadian steel could be about to get a phone call telling them the price of their order has just gone from $600 per widget to $750. "So who's going to pay it?"

But such dire predictions are far from universal.

Michael Manjuris, professor and chair of global management studies at Ryerson University, said Trump's gambit is a transparent attempt at playing misleading politics. But he sees a way Canadian metal companies could come out ahead.

He cited the long-running softwood lumber dispute. The U.S. has put import duties on Canadian softwood lumber for decades, "but they still import a lot from us," he said. "They just pay more for it."

Canadian softwood lumber companies and other manufacturers have turned themselves into "world class" leaders by selling a superior product, which could also happen for steel and aluminum, he said.

"Import duties cause trade diversion," he said. "It will change the way we do business but it will not hurt."

Manjuris also said he thinks the prospect of doing less business with the U.S. could prompt Canadian industry to look elsewhere for markets.

Businesses often complain about trade barriers even between provinces. If the current trade spat can push policymakers closer together on those issues, so much the better.

"If that's the conversation that starts, there's another benefit that happens," he said.

Global trade war to heat up

Ultimately, however, it's hard to imagine a trade spat between the United States and Canada — much less the rest of the world — being good for anyone in the long run.

Part of the uncertainty stems from the fact that it's not known what retaliatory penalties will be coming. Later on Thursday, Prime Minister Justin Trudeau outlined $16.6 billion in tariffs that Canada plans to slap on U.S. products as of Canada Day.

They will apply to everything from sheets of steel and aluminum to pizza and beer kegs —  all clearly items of paramount importance to national security.

The European Union will likely come next, having already signalled their intent to tariff U.S. goods. The list includes bourbon, jeans and motorcycles (all intentionally targeted at states that voted for Trump's protectionist message in 2016 and companies cheering him on today.)

"This is how you get into a trade war," Warrian said. "And contrary to Mr. Trump's famous [tweet], it's not good, and it's not simple.

"It starts with steel and it winds up in Gucci."