U.S. President Donald Trump on Tuesday pushed the heads of GM, Ford and Fiat Chrysler to build more of their cars in the United States and boost American employment in the process.

"I want new plants to be built here for cars sold here!" Trump said in a tweet ahead of the breakfast meeting with automakers, saying he would discuss U.S. jobs with the chief executives.

"We have a very big push on to have auto plants and other plants," he told reporters after the breakfast meeting, which started at 9 a.m. ET. "It's not the construction I want," he said, "it's the long-term jobs that we're looking for." 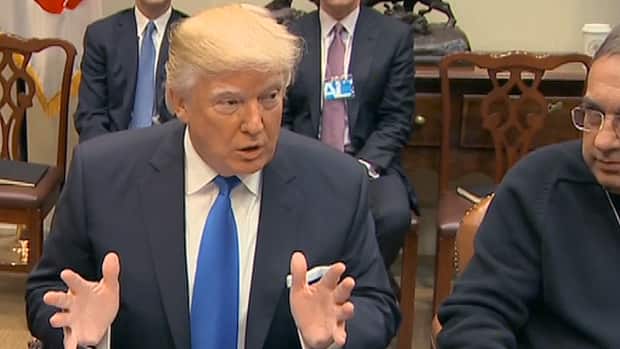 4 years agoVideo
2:23
'We are reducing unnecessary regulations ... we want real regulations that mean something': Trump 2:23

Sergio Marchionne, the CEO of Fiat Chrysler, said after the meeting that his company has a "common goal" with the new administration.

"I appreciate the president's focus on making the U.S. a great place to do business," Marchionne said. "We look forward to working with President Trump and members of Congress to strengthen American manufacturing."

GM CEO Mary Barra echoed that sentiment, saying "The U.S. is our home market and we are eager to come together to reinvigorate U.S. manufacturing. We all want a vibrant U.S. manufacturing base that is competitive globally and that grows jobs."

It would create mayhem with their profitability- Marina Whitman, on pulling out of Mexico

Trump has criticized automakers for building cars in Mexico and elsewhere and has threatened to impose 35 per cent tariffs on imported vehicles. Yet some of the most popular and profitable vehicles sold in the United States by Detroit's Big 3 automakers are imported from Mexico.

The Toyota Camry was the best selling car in the U.S. in 2015, and roughly 25 per cent of its components come from Mexico, Toyota North America's CEO Jim Lentz said recently.

In 2015, Mexico shipped just over $50-billion US worth of cars to the U.S., and about the same amount worth of auto parts.

Under current NAFTA rules, a vehicle can be sold within the United States, Canada or Mexico free of any tariffs as long as 62.5 per cent of the car's components are from within the bloc.

Mexico is a critical part of the North American supply chain, especially for small cars, Kristin Dziczek of the Detroit-based think-tank the Centre for Automotive Research said in an interview with CBC News on Tuesday.

The country currently makes about 900,000 such vehicles destined for the U.S. market every year, so "a million units would have to come back if we were to wall off Mexico with a high tariff," she said. Automakers would be unlikely to do that, and even if they did, it would only result in about 22,000 new jobs, she said.

Not to mention, much more expensive cars for buyers. Small cars are becoming less popular as it is, and while "it's possible," to build them in the U.S, "it's not very affordable."

The mutually beneficial relationship already in place in the auto sector was a theme the Liberal government was eager to champion at a cabinet retreat in Alberta on Tuesday.

When asked about what the Trump administration might mean for Canada's auto industry a spokesperson for Canada's minister of innovation, science and economic development Navdeep Bains said: "Canada and the U.S. have a highly integrated auto sector, one built on partnership. Our highly skilled workforce and innovative companies support and strengthen the competitiveness of production in the U.S., with parts and production flowing across our borders multiple times before completing a full vehicle.

"‎We are confident the new administration will see that Canada's partnership with the U.S. strengthens our two nations and strengthens the competitiveness of the U.S. auto sector.‎‎"

The meeting was the latest sign of Trump's uncommon degree of intervention for a U.S. president into corporate affairs as he has repeatedly strong-armed automakers and other manufacturers to "buy American and hire American."

Mexico has become a focus for automakers in recent years, thanks to a growing and skilled workforce but still-low labour costs.

Marina Whitman, a business professor at the University of Michigan and a former vice-president at General Motors Co., estimates that a unionized U.S. autoworker costs automakers $58 US for every hour of work, once salaries, pensions and benefits are included.

That same worker in a Mexican plant earns just over $8 US an hour, all in.

If Trump shuts the door on all Mexican auto manufacturing, "I don't think the auto industry would turn up its feet and die, but it would be a terrible shock," Whitman said. "It would create mayhem with their profitability."

The meeting was the first time CEOs of the big three automakers met jointly with a U.S. president since a July 2011 session with then-president Barack Obama to tout a deal to nearly double fuel efficiency standards to 5.2 litres per 100 kilometres by 2025.