A trade war is a political act of economic destruction: Don Pittis

As U.S. President Donald Trump knows, many voters cheer when their government threatens trade war. But as with real wars, the consequences can be perilous.

Like a real war, it spurs nationalist enthusiasm, but the consequences can be grim

One of the curious and, to many, incomprehensible, stories of the First World War is how young Canadians joined up in droves and marched off whistling to one of history's most gruesome conflicts.

Whether in a real war or in a trade war, waving the flag is politically popular in a way that is hard to understand to those who live through the ultimate consequences.

Criticisms of Canada's counter-moves, including a tweet by Opposition leader Andrew Scheer, faced criticisms of their own, and not just from the usual suspects.

For his part, Trump knows all about the popularity of blaming trade partners for his country's perceived problems.

"The United States has been taken advantage of for many decades on trade," said Trump in a statement following Canada's counter-measures. "Those days are over."

It all may be part the president's political campaign to convince supporters he's making America great, says Canadian economist Matilde Bombardini, currently working at California's Stanford University. But it's not economics.

"It's madness, from the economic point of view," says Bombardini.

Bombardini, on sabbatical from her job teaching economics at the University of British Columbia, has been watching the U.S. up close. And she says the U.S. trade deficit has nothing to do with bad trade deals or unfair tariffs.

Canada has treated our Agricultural business and Farmers very poorly for a very long period of time. Highly restrictive on Trade! They must open their markets and take down their trade barriers! They report a really high surplus on trade with us. Do Timber &amp; Lumber in U.S.?

"It's purely the result of their fiscal policy," she says, as the U.S. sells bonds to countries like China to make up Washington's soaring budget deficit. "They sell T-bills and they buy goods."

And while Trump is clearly playing politics, hoping his strong nationalist line will rally support in the congressional midterm elections, there is still economics at the heart of that growing dissatisfaction among his many supporters, says Canadian business thinker Roger Martin.

"Trump is unquestionably an effect, not a cause, just as is the case with Brexit," said Martin, director of the Martin Prosperity Institute at the Rotman School of Management, in an email conversation.

"In both cases the electorate voted to 'blow it up' even if they didn't feel confident they knew what 'it' was and whether the desired new state would surely be better or whether the relevant politicians could actually deliver on promises made," said Martin.

"I believe that very few Trump voters believed that he would bring steel production jobs back to the rust belt. But they did believe he would blow things up — and without question he is delivering on that promise."

Such desperate political views, angry, without hope of practical resolution, sound like the kind of mindset that starts wars of all sorts.

The question remains where, after the explosion, all the pieces will come fluttering down. Martin insists it's impossible to know whether the current global shakeup will end in something better or something worse.

Left in the dust

To go back a step, the reason Trump supporters decided they wanted to "blow it up" was that the vast majority of U.S. voters have been excluded from the New American Aristocracy, according to the cover story in this month's Atlantic magazine.

Author Matthew Stewart makes the case that an exclusive new U.S. class system has emerged, consisting of an educated aristocracy of which he is a member and that constitutes the happy, healthy, richest 10 per cent of Americans.

"We have left the 90 per cent in the dust — and we've been quietly tossing down roadblocks behind us to make sure that they never catch up," writes Stewart.

The last time such an aristocracy existed was in the 1920s and the last time it blew up was the Great Depression of the Dirty '30s.

Many analysts, including Ian McGugan writing in the Report on Business on June 1, insist Trump is just using these tariff threats as a bargaining ploy that he will abandon after winning over hardline supporters in the midterm elections.

Others, including international trade specialist Patrick Leblond at the University of Ottawa, say Trump is merely employing his Art of the Deal techniques to put pressure on China, Europe, Mexico and Canada.

Leblond says caving in to Trump's demands is not an option for any country in that group. But already, he says, trade war talk is having an effect, causing businesses to delay new investment till they see how things turn out.

There is also the possibility that if Trump sees that his nationalist, anti-foreign attacks succeed in electrifying his power base, he may decide to keep waving the flag even though many economists say it will hurt the U.S. as much as anyone else.

In Canada too, no matter how politically popular standing up to the U.S. is now, a trade war with our biggest trading partner would lead to economic damage. 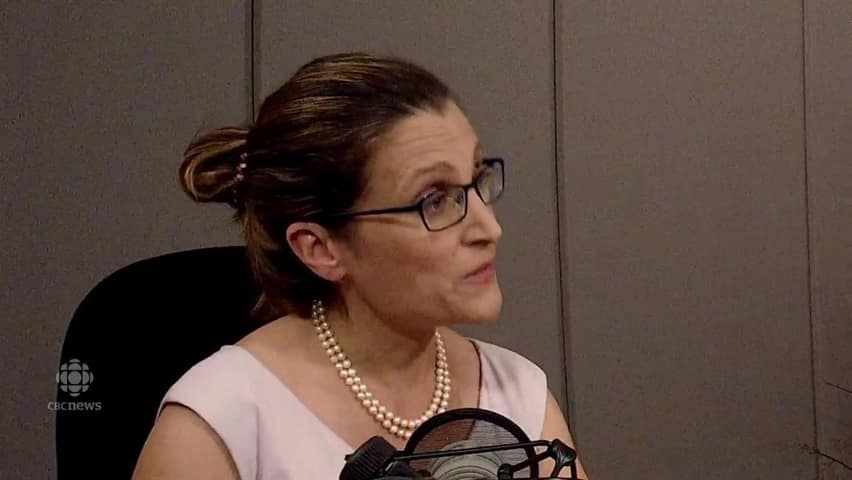 3 years ago
1:37
Chrystia Freeland told CBC Radio's The House the government will support Canadian metal workers from the fallout of U.S. tariffs. 1:37

Such talk of noble sacrifice and solemn duty sets the blood rushing at the beginning of any war even if appeals to patriotism and the hope of trade victory turn out to be a dangerous thing.

"At some point something's got to give, and I'm not sure that Trump's going to be on the winning side," says Leblond.

But as the young Canadians who marched off to the First World War found out, in any war, winning is a relative thing.