A father-and-son team of rookie inventors say they pitched their patent-pending COVID-safe lid applicator to Tim Hortons, and got a good response. But after the deal fell apart over a price dispute, they say the chain took their idea without paying a cent.

But instead of a massive, almost million-dollar sale to a national coffee chain, they've been left with a bitter taste in their mouths.

At the onset of the pandemic in March 2020, Yoland, 67, visited a Tim Hortons drive-thru near the family's home of Collingwood, Ont. He was disturbed to see the server handling the lid of his coffee cup immediately after taking his payment.

"It just rang a bell for me," he said. "I thought there has to be a different way to apply a lid, a way to have a safe coffee. Because I would have stopped drinking coffee at that point, seeing that."

As a superintendent for low-income housing developments, Yoland had zero experience as an inventor. Within three days, however, he'd come up with a design, and his son Shaun, 42, had found a manufacturer to produce thousands of the new device, dubbed the CleanCap.

The product is a simple ring manufactured with medical-grade plastic. It easily grips a single lid from a stack, and can then be used to place the lid securely on top of a coffee cup, hands free. A lawyer in Toronto helped the pair file applications for patents in the U.S. and Canada.

Shaun took the role of salesman, and began contacting fast-food operators. He said when they met with a Tim Hortons corporate-level manager, he was immediately enthusiastic about the CleanCap.

"When I first showed him how to use the product, he actually left the meeting, and scurried back to the office and got on the phone. He was like 'they've come up with something brilliant,'" Shaun recalled.

Excited by the reception, the pair felt confident to pitch other restaurants on the CleanCap and other COVID-related products Yoland had invented such as the CleanStix, a device to extend point-of-sale payment machines to customers at drive-thru windows. They set up meetings with other chains and individual franchisees, making some significant sales of both CleanStix and CleanCap.

Tim Hortons remained their biggest financial opportunity, however. There was discussion with a procurement officer at head office about a massive, chainwide purchase of the CleanCap worth as much as $870,000. The Talbots said the company had asked for hundreds of samples to be sent to franchisees across the country for testing, and had even sent the CleanCap for environmental testing at a firm in North Carolina.

Every test was a success, said Shaun. "I was told by an individual inside Tim Hortons that they had never seen something come back with 100 per cent approval rating."

But in July, the entire deal fell apart over pricing. The chain wanted to pay $4.99 per cap, and as the Talbots were charging a $15 wholesale price to other fast-food chains, they viewed the Tims offer as "not viable."

Yoland and Shaun focused their energies on other potential buyers, and continued to make sales at select locations of A&W, Starbucks, McDonald's, Second Cup and Burger King.

Then several weeks ago, out on a delivery run near Oakville, Ont., Shaun stopped for a coffee at a local Tims. He says he couldn't believe what he saw — the server was using a device that looked exactly the same as the CleanCap. "The only difference was that it had been manufactured in red plastic," he said.

He called other Tims locations across Canada that had tested his father's product, and discovered that a number of them were now using the "red cap," as he called it, while others had one in blue. Some appeared to be unaware it wasn't the Talbots' invention. "One woman told me 'we love your product,'" he said. "She had no idea." 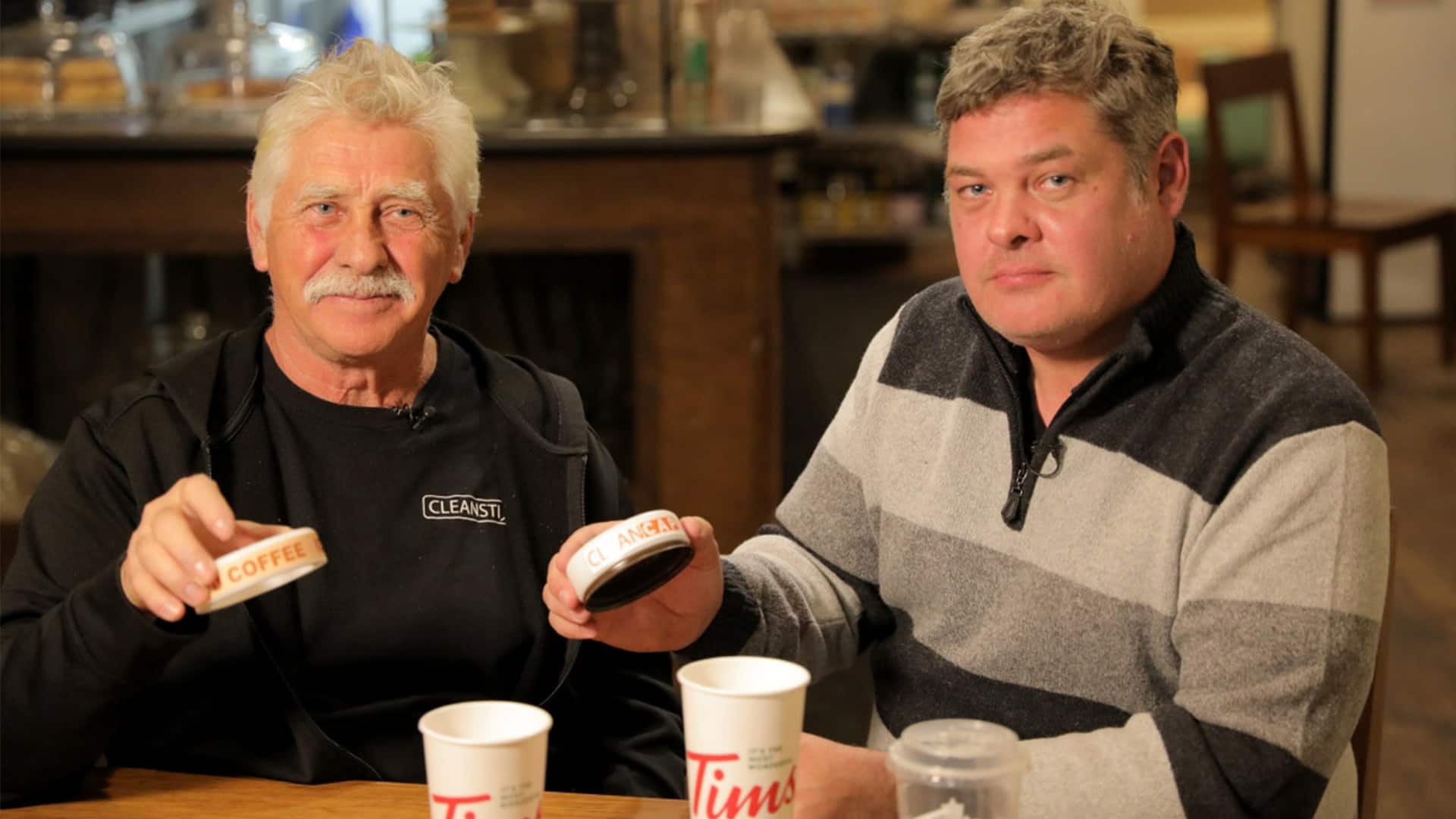 2 months ago
2:18
A father-and-son entrepreneurial team tells CBC’s Go Public that Tim Hortons stole their idea for a hands-free applicator for coffee cup lids after being shown early prototypes. 2:18

After being contacted by the Go Public team, Tim Hortons issued a statement to CBC News. It said the company had received proposals for lid applicators from a number of different suppliers. "The suggestion that we shopped around someone's idea to find a better price is absolutely not true," it said. "We did not instruct any vendor to design this product on our behalf — we simply responded to multiple vendors who brought forward substantially similar ideas."

The coffee chain also noted that, so far, it has not yet decided whether it will proceed with any vendor to make lid applicators standard across the chain.

The statement added that the case is simply one of fair procurement, and suggested the Talbots' desire to speak to CBC News about their experience is odd. "It is unusual for companies to complain to the media if they are unable to secure a contract through the standard process."

Go Public contacted independent product designer Kevin Bailey for an outside perspective on just how closely the Tims device resembles the Talbots' CleanCap. Bailey's Ottawa-based firm, Design 1st, has years of experience dealing with large companies and patents; in 2020 alone it invented and sold 70 different products.

Bailey was asked to examine both the CleanCap and the "red ring" currently in use at a number of Tim Hortons locations across the country.

His verdict? "They are virtually identical," he said. "There's only one feature on this product that is relevant, which is the gripping surface. And the two products have the exact same gripping surface and very similar materials."

Out of curiosity, Bailey staged an experiment to determine how likely it would be for separate individuals to come up with such strikingly similar designs. He called on three of his firm's designers and — without sharing the background of the Talbots' situation with Tim Hortons — asked them to come up with a hands-free lid applicator.

"There was no collaboration between them, no source material," he said. "Just a coffee cup and the problem to be solved."

The team came up with eight different types of applicators, and actually manufactured one using an in-house 3-D printer. None matched the CleanCap as closely as the red ring from Tim Hortons.

"It didn't take long to come up with a design, but the design of this," said Bailey, holding up his team's design in one hand and the Tims and Talbots devices in the other, "is significantly different than these two. And so were the other seven designs."

Go Public asked Tim Hortons about Bailey's findings. The company's reply: "We were not involved in the design of any of the products that we evaluated and cannot speak to any similarities in their designs."

The possibility of legal action

Bailey said that it's very common for small business people to worry about submitting a patent-pending product to a big corporation.

"It's David and Goliath," he said. "And for the most part, I don't think companies are predisposed to take inventors' ideas. They want a solution. I think that's where things fall apart; inventors have to do design and create the business at the same time, and are maybe too slow for the engine that requires the goods."

He added that having the lowest possible price is always a key factor in making a sale. "Entrepreneurs often want to support local businesses, but usually China can make things for a fraction of the cost."  The Talbots had indeed worked with an Ontario-based manufacturer not far from Collingwood.

Other than that, in Bailey's view, they did everything right.

Patent lawyer Elliott Gold of Ridout & Maybee LLP said that if the Talbots truly believe Tim Hortons copied their design, they could consider legal action — but that could only happen if their patent is granted, which is not guaranteed.

"The patent lawyers and the patent office go back and forth and argue about what you're actually entitled to for protection. And it takes typically two to three years, if not more," he said. He estimates the cost of getting to the discovery stage prior to a trial can cost $100,000, while actually going to trial costs much more.

Bailey, the independent designer, said at the end of the day, the decision about whether to sue is a math equation. "The biggest challenge is that it costs money to go to court and defend yourself," he said, explaining it makes no sense to spend more on a lawsuit than you could potentially collect as damages, measured by the potential revenue lost.

Given that Yoland was laid off from his superintendent position at the start of the pandemic, and that Shaun's work in the recreation business also disappeared, the two are pinning their family's financial situation on growing sales for Yoland's inventions.

Dominic Ling, who purchased the CleanCap for the 22 A&W franchises he operates in Ontario, said he believes the CleanCap is an important safety measure that should be used widely across Canada. "I think it's something that should have been mandated even before the pandemic," he said, noting that A&W's "standards board" is currently reviewing whether to implement the CleanCap system-wide.

Bruce Collett, who handles purchasing at the University of Guelph, bought the CleanCap for use at the on-campus coffee shops. They include Starbucks, Second Cup, Tim Hortons and Planet Bean. He said he felt a $15 price tag was reasonable.

"It's good, solid plastic. This isn't something that's going to break."

The Talbots are convinced their products have a future even beyond COVID-19. So far, they say they've sold over $200,000 worth.

"If you went out for dinner and the waiter brings your beverages, and then before they walk away, they lean over and put their hand on the surface area of your wine glass or the top of your beer — would you drink that?" Shaun asked. "It would be a bit odd."

With files from Kimberly Ivany