'I hope to be part of the solution': Albertans rethink approach to energy, environment

The Alberta energy sector's future is cloudy, but some are banking on an economy based on world-leading bright ideas. Energy Futures Lab is one of the groups that believes Alberta can be the key to solving climate change problems by becoming a leader in new energy technologies.

Here's something you don't see every day — in a conference room no less.

A hundred or so Albertans from different parts of the energy sector, from oil and gas to renewables, playing a game together.

The game is called a "moving conversation" — as in, if you like what someone says, you walk across the room toward them.

If you don't, you walk away.

Leung says it's a way to get people with very different opinions about controversial topics, such as pipelines and climate change, to actually listen to one another.

"One of the things we believe in the Energy Futures Lab is that a diversity of views and ideas about energy is a benefit — not a challenge," Leung says.

"And people are sick of yelling at each other."

The lab believes Alberta can be the key to solving climate change by becoming a leader in new energy technologies.

Of course, in the heart of oil country this idea presents challenges — and disagreements.

That's where the game comes in. 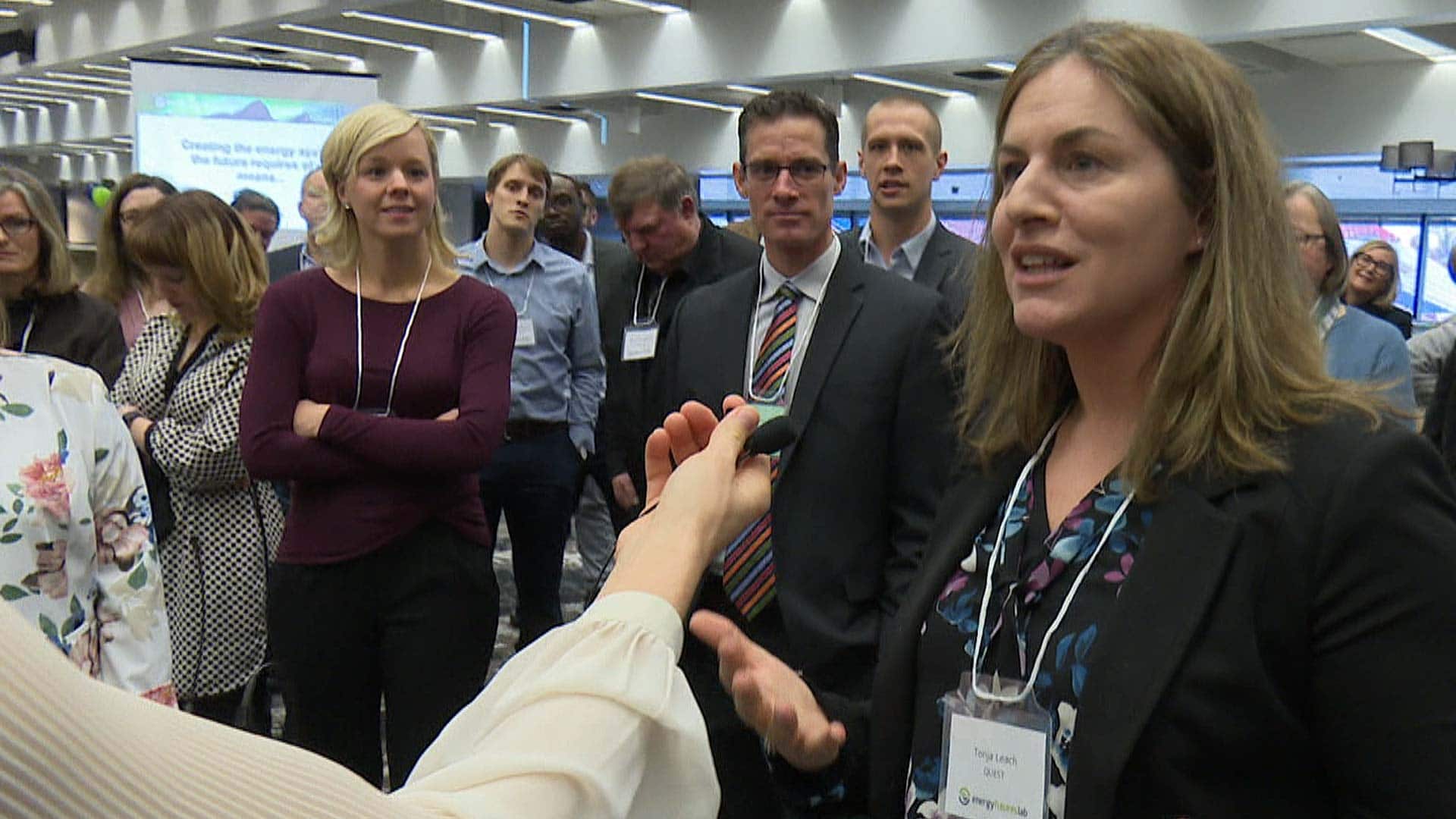 Leung gets the ball rolling by asking the 100 or so people in the room to finish the following statement: "Creating the energy system the future requires of us means …"

"It means we have to calculate the true cost of energy we use," says a woman at the far end of the room.

About half the people in the room shuffle toward her, others move away.

A man takes the microphone. "Creating the energy system the future requires of us means recognizing that not every form of energy currently available will have a role in the new system."

There's some muttering and plenty of movement in the room — and no wonder, arguably this is one of the biggest issues facing Alberta.

How much will oil and gas, for example, be part of the province's energy future?

Next a woman announces that Alberta needs to showcase that it has some of the cleanest energy in the world.

There's a stampede toward her.

Mark Hopkins, an artist who recently joined the Energy Futures Lab, in part to provoke people, takes the microphone with a smile.

"Creating the energy system of the future means ... dismantling capitalism," he announces.

The room bursts into awkward laughter and everyone moves as far away from Hopkins as possible.

The game continues and the comments are mostly polite and respectful.

In a way what's remarkable is what's not being said — nobody has even said the words "oil" or "gas" or "pipelines."

And so Leung intervenes and demands someone make a statement about pipelines.

Bart Robinson, the chair of a non-profit ecological organization called The Natural Step, takes the plunge and quotes the latest United Nations report that estimates there's a 12-year time limit to prevent the more serious effects of climate change.

"People say it is going to take more than 12 years to get those pipelines in place, therefore I would say the pipelines are probably not a part of the future," Robinson says.

Hanna is an energy consultant who has worked in the oil and gas industry for 25 years.

She says people need to open their minds to pipelines.

"We have energy that's available to the world, and if we can't get that to market then we can't support the energy transition worldwide," she says.

The key point for Hanna is that oil — or hydrocarbons — are necessary to get renewables going.

"Where are you going to get the metal from to make a wind turbine blade?" Hanna asks.

"We can't make steel without metallurgical coal. We can't fire a furnace off of solar. It doesn't happen that way," she says.

Regardless, the Energy Futures Lab believes the planet's energy problems can't be solved if we don't embrace everyone's ideas — and that includes Alberta's, says Chad Park, one of the lab's founders.

The Energy Futures Lab is hands-on when it comes to that work, too.

"The world is changing the way it generates and uses energy, and I really hope Alberta is able to participate in that," says Jim Sandercock from his alternative energy workshop in Edmonton.

Sandercock is a member of the Energy Futures Lab and the inaugural chair of the alternative energy technology program at the Northern Alberta Institute of Technology (NAIT).

"I think it would be great if Alberta could apply our skilled trades and our engineering know-how to create more energy solutions, and increasingly moving towards what the world wants — which is carbon neutral," he says.

Sandercock says his alternative energy program has doubled in size in the past year, with 100 students currently enrolled.

In the face of the economic downturn, several of them are also former oilpatch workers.

Dustin Taylor, 35, grew up in Edmonton into what he calls an "oil and gas family" — both his parents worked in the oilpatch.

"Oil put food on the table for us," he says.

Out of high school Taylor went to work in the sector as well, most recently as a technician in Nisku, Alta., where he made more than $100,000 a year.

But a few years ago when oil prices dropped, Taylor says his entire division was cut.

Taylor had to upgrade his education before he was accepted into the program at NAIT, but he says he wanted to be part of the solution to the climate crisis.

"We all talk about climate change, it's a glaring issue, it's not something we are getting away from," Taylor says.

Taylor isn't just trying to send a message to his kids — he has one for oil workers too.

He says many of those employed in Alberta's oil industry could make the transition to working in renewables.

"I've got friends in oil and gas still, I definitely don't want to see them lose their houses over things. It would be nice to see a few of them get involved," he says.

Geothermal energy, for example, requires drilling into the earth to harness the energy underground. "And we have some of the best drillers in the world. They can be part of this," he says.

Taylor already has a job waiting for him when he graduates in April 2019 working for a company that installs solar panels.

But not every student here is that well set up.

For the past eight years, Aaron Bohnert, 31, worked in directional drilling for oil and gas exploration companies in Alberta. Bohnert says he was making around $150,000 a year, but he gave it up, in part because he's worried about climate change.

"I knew the climate crisis is real, so instead of turning my back on it, I wanted to be part of the solution to change that," he says.

Alberta is looking for solutions, too, and pushing alternatives.

The provincial government has pledged to make renewable energy 30 per cent of Alberta's power grid by 2030.

That's partly why Bohnert believes there will be plenty of jobs in his new field when he graduates, but he recognizes there are no guarantees.

"It is scary to think that this potentially may not take off as quickly as I'd like, but all you can do is hope I guess," he says.

When asked if he'd return to his old job if oil prices went back up, Bohnert pauses and smiles.

"It would be nice to say no, but to be honest, because of the money and the student loans ... money pays for everything," he says. "I would like to say I'd say no, but it depends on my situation at the time."

Still, Bohnert is banking that a career in renewable energy will work out.

"I hope to be part of the solution."

Watch The National's story about the questions facing the place of oil and gas in the future of Alberta's energy sector: 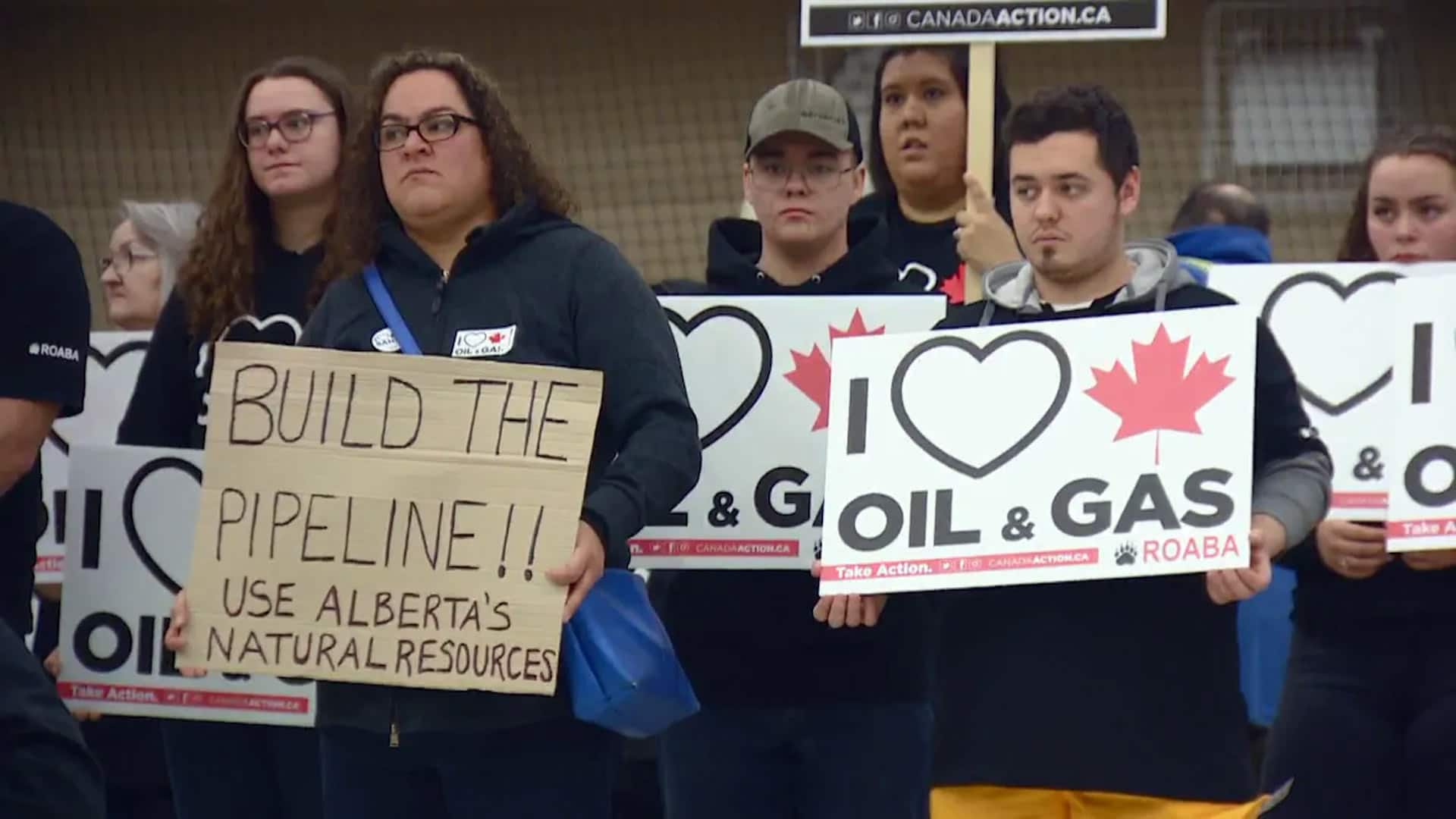 2 years ago
9:49
How do oil and gas fit into the future of Alberta’s energy sector? We have a look at how pipeline advocates are coming together with those who believe renewables are the way forward. 9:49
CBC's Journalistic Standards and Practices|About CBC News