FAQ: Are slaves peeling the shrimp you buy? Here's what you need to know

After an AP investigation found rampant labour abuses including slavery at Thai shrimp factories, consumers are demanding action. Unfortunately, it's not easy to tell where all that shrimp ended up because of poor supply chain management practices at major restaurants and grocers you've heard of. 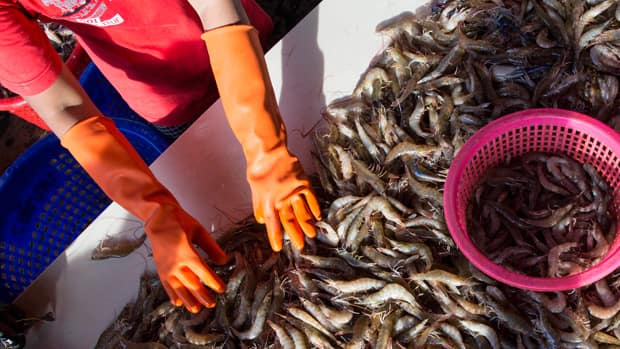 5 years ago
6:35
Dan Viederman, CEO of non-profit Verité, explains how shrimp and slavery are linked in Thailand, and what consumers can do about it 6:35

U.S. customs records show the farmed shrimp made its way into the supply chains of major U.S. food stores and retailers such as Wal-Mart, Kroger, Whole Foods, Target, Dollar General and Petco, along with restaurants such as Red Lobster and Olive Garden. AP reporters in all 50 states went shopping and found related brands in more than 150 stores across America.

The businesses that responded condemned the practices that lead to labour abuse, and many said they were launching investigations.

Q: How do I know if my shrimp or other seafood is tainted by labour abuses?

A: That's a big part of the problem. Most companies do not make their supply chains public. And even if they did, there are many places for abuses to occur that are not documented or take place far from any type of scrutiny. For example, slaves have been forced to work on boats catching trash fish used for feed at shrimp farms, and migrants have been brought across borders illegally and taken straight to shrimp sheds where they are locked inside and forced to peel. Fishing boats are going farther and farther from shore, sometimes not docking for months or years at a time, creating floating prisons.

Q: What shrimp brands and companies did the AP find linked to tainted supply chains in its investigation?

Q: AP reporters visited supermarkets chosen at random in all 50 states. Where did they find shrimp linked to tainted supply chains in its investigation?

Q: Thailand has been in the news a lot lately with problems linked to human trafficking in its seafood industry. Why is this still an issue?

A: Thailand is one of the world's biggest seafood exporters, and relies heavily on migrant workers from poor neighbouring countries such as Myanmar, Cambodia and Laos. These labourers often are misled by brokers in their home countries and illegally brought to Thailand with promises of good-paying jobs.

They are then sold onto fishing boats or put into seafood processing plants where they become trapped and forced to work long hours for little or no money. Thailand has repeatedly vowed to crack down on the abuses. It has created new laws and is helping to register undocumented workers, but arrests and prosecutions are still rare.

Q: What are buyers and governments doing to try to stop slave-tainted seafood from reaching their countries?

A: The U.S. State Department has blacklisted Thailand for the past two years for its dismal human rights record, placing it among the world's worst offenders such as North Korea and Syria. However, it has not issued sanctions. The European Union put out a "yellow card" warning earlier this year that tripled seafood import tariffs, and is expected to decide next month whether to impose an outright ban on products. Companies such as Nestle have vowed to force change after conducting their own audits and finding that their Thai suppliers were abusing and enslaving workers. Others are working with rights groups to monitor their supply chains and ensure labourers are treated fairly and humanely.