Tesla Motors gave a sneak preview Thursday of its $35,000 US electric car that is critical to the Silicon Valley auto maker's growth plans and soaring stock value.

More than 137,600 orders for vehicle received before and during unveiling, company says 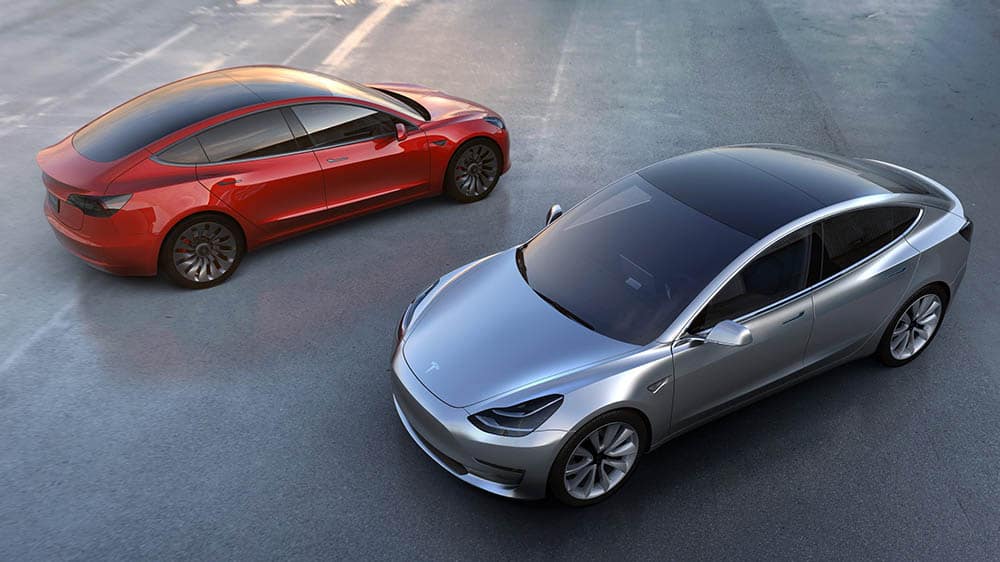 Tesla Motors gave a sneak preview Thursday of its Model 3 sedan, saying more than 130,000 people had ordered the car, even though it is more than a year away from production.

Tesla chief executive Elon Musk unveiled a prototype of the Model 3 in Hawthorne, Calif., outside Los Angeles to hundreds of Tesla owners and the media, saying the vehicle will go into production in 2017 at a starting price of $35,000 US.

The Model 3 is critical to the Silicon Valley automaker's growth plans and to sustaining its lofty stock price. Tesla shares rose as much as 7.9 per cent to $247.88 US on Friday morning. By late morning, they were trading at $237.90.

"It's very important to accelerate the transition to sustainable transport," said Musk. "This is really important for the future of the world."

Musk guided the audience through the journey from the company's previous models, the Roadster, S and X, to the current one.

"With any new technology, it takes multiple iterations and economies of scale before you can make it affordable," said Musk, the South-African born CEO who spent two years at Queen's University in Kingston, Ont.

"Do you want to see the car?" teased Musk, to screams from the audience in the hangar-sized facility inside a Tesla design center. "We don't have it for you tonight — just kidding!"

Three Model 3s were driven onstage, which looked like a shorter version of Tesla's Model S sedan. The Model 3 has a panoramic glass roof and an elongated hood. Inside, it seats five adults and has the same large touchscreen dashboard as other Teslas. It also has Tesla's suite of semi-autonomous driving features, including automatic lane changing and lane keeping. Musk said it will accelerate from zero to 60 in less than six seconds.

Musk says it will go at least 345 kilometres on an electric charge.

Musk said that 115,000 pre-orders had already been taken on Thursday alone for the car. Within a half hour, that number reached 137,600 in a rolling scroll projected onto a screen. Tesla wouldn't say how many of those were from Canada. In an email, the company told CBC News it doesn't break down numbers regionally.

Musk said the car is on schedule to go on sale at the end of 2017, eliciting a cheer from the crowd of around 800 people. Tesla has a history of missing deadlines for its vehicles to hit the market.

"I do feel fairly confident it will be next year," Musk said.

To support sales, Musk says Tesla plans to double the number of stores it has worldwide to 441 by the end of next year. It also plans to double its fast-charging stations to 7,200.

Fans had camped out overnight, queuing outside Tesla stores across California to put down deposits on the car in scenes reminiscent of the launch of Apple Inc products.

Canadians across the country put down a refundable deposit of $1,000.

Tesla's website said Ontario and Quebec owners can get up to $1,000 rebate on the wall connector and installation. Ontario buyers could be eligible for a rebate of up to $14,000 and carpool lane access, while Quebec buyers are eligible for between $6,000 to $8,000 in rebates depending if they're buying or leasing.

The Model 3 is crucial for Tesla to reach its goal of selling 500,000 cars per year by 2020. The success of Tesla's Gigafactory, its battery-producing site near completion in Nevada, is also contingent on the Model 3.

Tesla says scale from the massive facility will cut the cost of its battery pack by 30 per cent to enable the lower-priced vehicle.

High expectations ahead of the unveiling restored Tesla's shares to around the $230 US-mark, recovering from a year low of $141.05 in February after analysts cut price targets and revenue expectations.

"It is important to the industry, because it will signal whether or not Tesla Motors is a major threat to the status quo or just another wannabe car company with a fleeting chance for long-term success," said Kelley Blue Book's Jack Nerad.

GM is on track to beat Tesla to the market with its Chevrolet Bolt electric car, which GM says will launch late this year, offering about 200 miles of electric driving range and a starting price of around $35,000.

The Model 3 and others in the new generation of electric vehicles face challenges from low gasoline prices, high battery costs and uncertain investment in recharging infrastructure.

Through the first two months of this year, sales of all-electric and hybrid vehicles are down nearly nine per cent to 60,384 vehicles, data from trade group the Electric Drive Transportation Association shows.

Several short-term concerns, such as that Model 3 production will be delayed, and the slow ramp of the Model X will continue, go hand-in-hand with skeptics' longer-term worries that the unprofitable company will continue to bleed cash.

In February, Tesla said it would start generating positive cash flow this month.