World stock markets sold off heavily today as high-stakes negotiations between Greece and its many creditors entered their 11th hour with no deal in sight. 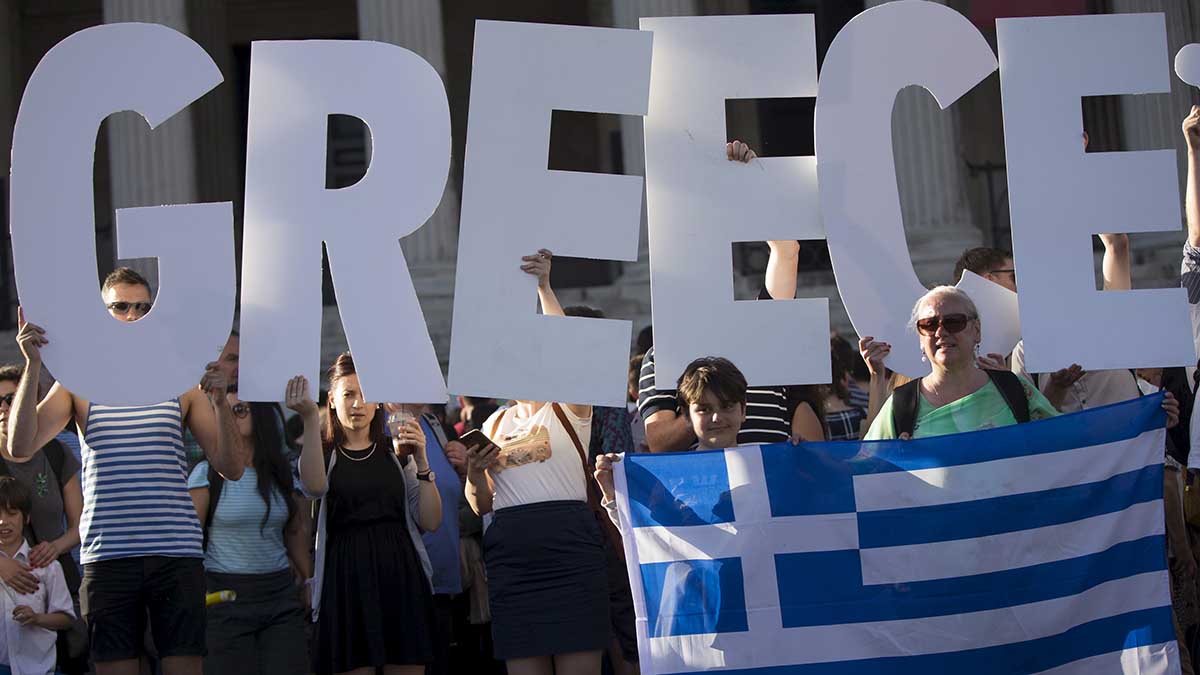 7 years ago
Duration 2:19
The CBC's Margaret Evans is in Athens, where demonstrators gathered to protest against the European Central Bank's handling of Greece's debt repayments
World stock markets sold off heavily Monday as high stakes negotiations between Greece and its many creditors entered their 11th hour with no deal in sight. CBC's Margaret Evans on repercussions beyond the eurozone

The TSX was down by 318 points or 2 per cent at the close Monday. The Canadian dollar dropped half a cent to 80.71 US cents. New York's Dow was also down 350 points, or 1.9 per cent, in their worst day of the year,  as worry about negotiations half a world away weighed on just about every sector. Both stock indices have now wiped out all of their gains for the year.

Japan's Nikkei and Hong Kong's Hang Seng indexes shed 600 and 700 points, respectively — almost three per cent of the value of each stock market.

All that pessimism was rooted in events on the ground in Athens, as the country is on the verge of defaulting on its loans, something that could technically happen as early as Tuesday at midnight local time.

Greek Prime Minister has said the country will not make a payment it owes to the IMF by then, and will instead wait to decide what to do until after the results of a referendum on the issue next weekend.

European Commission President Jean-Claude Juncker says "It is time for Greeks to speak up and to shape their own destiny."

Juncker countered by saying "I'd like to ask the Greek people to vote 'yes' … you should not commit suicide because you are afraid of death."

Anxious Greek pensioners swarmed closed bank branches Monday in the hope of getting their pensions, while queues formed at ATMs as they gradually began dispensing cash again following the imposition of strict controls on capital.

Greece woke up Monday to a changed financial landscape that many in the markets fear could be a prelude to a messy debt default and a damaging Greek exit from the euro.

The banks and the country's stock market have been closed for the week after Prime Minister Alexis Tsipras' surprise call for a referendum next Sunday on budget and reform proposals creditors are demanding Greece should take to gain access to blocked bailout funds. Tsipras is advocating Greeks reject the proposals in the popular vote, which increasingly has the look of a vote on euro membership itself.

The sense of unease was evident in the number of pensioners lining up at bank branches hoping they might open. Many elderly Greeks don't have bank cards and make withdrawals in person at the till, and so find themselves completely cut off from their money. One of the most onerous controls is a daily limit of 60 euros ($82.72 Cdn) on cash withdrawals from ATMs.

"I came here at 4 a.m. because I have to get my pension," said 74-year-old Anastasios Gevelidis, one of about 100 retirees waiting outside the main branch of National Bank of Greece in the country's second largest city of Thessaloniki.

"I don't have a card, I don't know what's going on, we don't even have enough money to buy bread," he said. "Nobody knows anything. A bank employee came out at 8 a.m. and told us `you're not going to get any money,' but we're hearing that 70 branches will open."

The country's pharmacy association moved quickly to assert there are no drug shortages in the country, easing fears on that front.

Government officials also contacted the supermarkets' association, which has said there will be no problems in supplies or commercial transactions.

The Finance Ministry said the manner in which pensions would be paid would be announced later Monday afternoon.

Deputy Minister of State Terence Quick said special arrangements would be made for pensions, telling private Antenna television that pensions would be dispensed in full as many pensioners don't have bank cards.

The daily withdrawal limit wouldn't be enough to cover many basic necessities. "What can I do first with 60 euros? I owe 150 just to the pharmacy," Gevelidis said.

The capital controls are meant to staunch the flow of money out of Greek banks and spur the country's creditors to offer concessions before Greece's international bailout program expires Tuesday.

Without a deal to extend the bailout program, Greece will lose access to the remaining 7.2 billion euros ($9.93 billion Cnd) of rescue loans, and is unlikely to be able to meet a 1.6 billion-euro ($2.21 billion Cdn) debt repayment to the International Monetary Fund due the same day.

Much of the problem from the international community stems from the fact that there is a lot of Greek debt on the books of foreign nations and foreign banks.

The accelerating crisis has thrown into question Greece's financial future and continued membership in the 19-nation shared euro currency — and even the 28-country European Union.

"What we are facing, in my opinion, is the 'Eurozone Moment' which may turn out to be the 'Lehman Moment' squared," he said, referring to the 2008 collapse of U.S. bank Lehman Brothers, the failure of which started the last great global recession.

Others are more confident.

TD Bank economist Andrew Labelle said "Greece will almost certainly not pay the 1.5 billion euros it owes the IMF on June 30th [but] In reality, this will have no immediate impact."

Greece also owes fairly sizable salaries and pension payments on Tuesday, Labelle says, but the country is believed to have enough funds for these payments. "In the case of non-payment, domestic unrest may increase," he said.

Investors around the world are worried that should Greece leave the euro and say it can't pay its debts, the global economic recovery could be derailed and questions would grow over the long-term viability of the euro currency itself.

"The images of queues at ATMs in Greece are stripping traders of what little confidence they have left in the nation, and the financial earthquake that happened in the eurozone over the weekend can be felt around the world," said David Madden, market analyst at IG.

Aside from developments at the banks in Greece, massive queues formed at gas stations, with worried motorists seeking to fill up their tanks and pay with credit cards while they were still being accepted.

Electronic transfers and bill payments are allowed, but only within the country. The government also stressed the controls would not affect foreign tourists, who would have no limits on cash withdrawals with foreign bank cards.

Ratings agency S&P deems the country's debt as CCC-negative. That's one of the lowest levels on the scale, after being downgraded to CCC-positive earlier this month. In April, Greece was rated BBB-negative, still in "junk" status