Stephen Poloz, the head of Export Development Canada, has been named as the surprise pick to succeed Mark Carney as the next governor of the Bank of Canada. 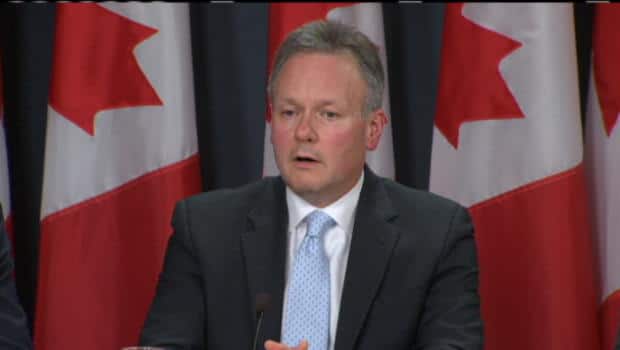 Stephen Poloz, the head of Export Development Canada, has been named as the surprise pick to be the next governor of the Bank of Canada.

Poloz, who has experience in both the public and private sector, replaces Mark Carney, who is leaving his post to lead the Bank of England.

At a Thursday afternoon press conference in Ottawa, Minister of Finance Jim Flaherty said the search for the new governor was extremely thorough and sought out candidates from around the world.

"It has taken us some time to get to this point," Flaherty said, adding that the appointment process was scrupulously followed.

Flaherty said he is confident Poloz will perform with "distinction" as he guides the Bank of Canada for the next seven years.

"The bank's employees are its greatest strength, and thanks to their efforts, the Bank of Canada enjoys a tremendous reputation globally as one of the world's most effective and highly regarded central banks," Poloz said.

"I pledge to do my utmost to live up to the high standards set by those who came before me."

Carney, who was also on hand for the announcement in Ottawa, said he appreciated the "sharp insights" Poloz offered on the Canadian and global economies.

Carney is set to leave June 1 for London, where he will be the first non-Briton to serve as governor of the Bank of England.

The selection of Poloz came as a surprise to many — most analysts had predicted that Tiff Macklem, the central bank's senior deputy governor, would succeed Carney.

Poloz studied at Queen's University and later received a master's degree and PhD in economics from the University of Western Ontario.

He comes to the Bank of Canada from EDC, where he most recently served as president and CEO. But the Oshawa, Ont., native has previous experience at the Bank of Canada — he joined the central bank in 1981 and worked there for 14 years, a statement released by the bank says.

John Stephenson, senior vice-president and portfolio manager at First Asset Investment Management Inc. in Toronto, said he doesn't understand the rationale behind the appointment of Poloz  — especially when he is compared to Macklem, whom many had considered the front-runner for the post since Carney announced his resignation five months ago.

"Tiff was well respected.… Maybe Tiff didn’t want it, but it seemed like he did," Stephenson said, adding that he thinks some may react negatively to the choice of Poloz.

"For one, I think Tiff was the likely odds-on favourite, so you kind of wonder why it went  to No. 2," he said. "I think that’s going to be a hard wall of worry for [Bay Street] to overcome."

Macklem was not on hand for the news conference, and Flaherty declined to offer details about others who may or may not have sought the job. However, Carney noted that Macklem and Poloz had previously worked together. The outgoing governor said Macklem "welcomes" the appointment and looks forward to working with Poloz.

Stephenson says that there are still a lot of unknowns about  Poloz  — whether he is hawkish or dovish, and what his positions are on monetary policy.

"Markets will look at this with a certain degree of skepticism and uncertainty," he said. "He's not really known outside of Ottawa circles."

In a note to clients, the Canadian Imperial Bank of Commerce said: "The choice of Stephen Poloz as the new governor of the Bank of Canada is a huge surprise."

"Why did the finance minister decide to take this direction as opposed to the widely expected choice of going with the current senior deputy governor? The answer may be that the minister would like to see a governor with more experience with dealing directly with the private sector."

Poloz had been considered by some as a possible candidate for the bank's top position.

Ian Lee, an assistant professor at the Sprott School of Business at Carleton University, said Poloz was a "very good choice" who has some skills that the search team may have been looking for — notably, his understanding of global trade.

"He has private sector business experience — he's got trade. This is a government that has bet the farm on trade and prosperity, and this guy knows trade," Lee said on CBC's Power & Politics.

Douglas J. Porter, chief economist at the Bank of Montreal, said he doesn’t expect a significant shift in the Bank of Canada's policy in the near future, despite the uncertainty surrounding Poloz

"Mr. Flaherty's biggest concern is household debt, and he would not have approved a choice who had a significantly different view," Porter said in a note.

He added that with the recent uptick in Canadian GDP, auto sales and trade, there is less pressure on the central bank to drop its "very mild" tightening bias on interest rates.

Carney, who was appointed to the top job at the Bank of Canada in 2008, has held the bank's influential overnight interest rate at the historic low of one per cent since 2010 in an attempt to spark business activity and help the country recover from the lingering effects of the global recession of 2008-09.