Starting Saturday, Starbucks will ban smokers from lighting up a cigarette outside any of their 7,000 coffee shops across the U.S. and Canada, within the bounds of the company's leased space. 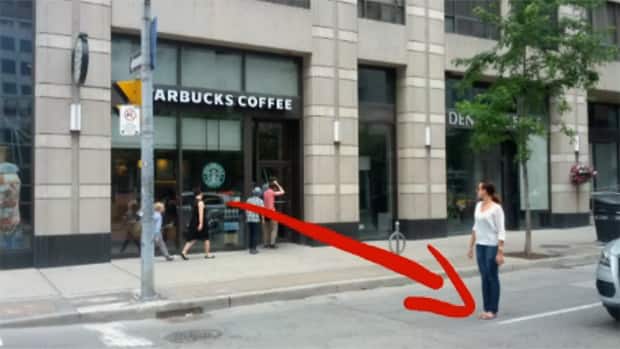 Coffee without a cigarette

8 years ago
2:07
Starbucks Coffee is extending a no-smoking ban to within eight metres of its stores 2:07

Starting Saturday, Starbucks will ban smokers from lighting up a cigarette outside any of their 7,000 coffee shops across the U.S. and Canada.

The ubiquitous Seattle-based chain announced Friday that it will implement a ban on lit cigarettes within 8 metres of its store entrances.

The ban will be in place whether or not there is an outdoor seating area, the company says, but it's limited to Starbucks-controlled spaces and wouldn't extend beyond the company's leased space.

"If there were any concerns, we would hope to resolve it amicably." Starbucks' U.S. spokeswoman Jaime Lynn Riley said, referring to a customer who might be smoking within the restricted area.

"Effective June 1, Starbucks' existing no-smoking policy will be extended to include outdoor seating areas of our company-owned stores in Canada," spokesperson Carly Suppa told CBC News in an email. " We want to provide all customers a safe, healthy environment and an experience that is consistent across our company-owned stores."

The move is an extension of a long-running ban on smoking inside the stores.

Many Canadian cities and provinces have laws on the books that ban smoking within a certain distance of the entrance to any public building. Bans on smoking on outdoor spaces such as covered patios are also common. Smoking on any government-owned property is also forbidden.