It's a trap! The economic argument against blowing up the Death Star

According to the calculations of a dogged economist, the fallout of destroying the Death Star would have been a catastrophe for both the Empire and the Rebel Alliance.

With the value of the Death Star sitting at $193 quintillion, its demise would've been costly in the long run 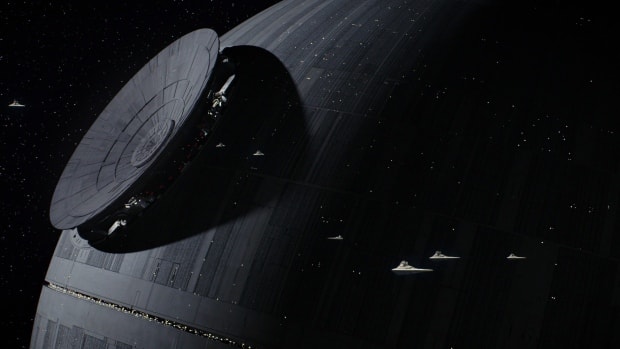 Why blowing up Death Star might not be good idea

4 years ago
6:52
According to calculations by economist Zachary Feinstein, the fallout of destroying the Death Star would have been catastrophe for both the Empire and the Rebel Alliance 6:52

A long time ago, in a galaxy far, far away, a bunch of rebels blew up a giant space station and set the course for one of the biggest, most successful movie franchises of all time.

But what if they got it wrong?

Those noble rebels were fighting a tyrannical emperor and a psychotic Jedi drawn to the dark side. Blowing up the Death Star was supposed to knock the Empire on its heels and change the fate of millions across the galaxies. But what if it actually made their miserable lives even worse?

Feinstein holds a doctorate in financial engineering and is the author of a paper entitled "It's a Trap: Emperor Palpatine's Poison Pill," in which he determines the cost of building both Death Stars.

The first one, you'll recall, was blown up in the original Star Wars movie.

The second, of course, was destroyed by Lando Calrissian in Return of The Jedi.

Once he calculated the price tag of building a Death Star, Feinstein was able to calculate the size of the global economy at the time.

Calculating neither figure was easy.

Feinstein started with a real world document: a petition calling on the White House to build a Death Star. The chief of the science and space branch at the White House's Office of Management and Budget actually responded to that petition.

"That was just the cost for the steel, the raw materials for building a Death Star. I took those numbers and found actually instead of $800 quadrillion, it would be $193 quintillion."

He searched for a comparably ambitious military research and development project and settled on the Manhattan Project, the U.S. research project that produced the first atomic bombs.

Assuming a galactic economy that's growing at two per cent per year, Feinstein calculated that GGP at the time the first Death Star was built would be $6.09 sextillion.

Feinstein's field of study — when he's not painstakingly dissecting the Star Wars universe — is system risk. So once he had calculated the size of the economy and the cost of the project, he just applied his own research.

He found the costs of destroying the Death Star would be staggering, requiring an enormous, galactic-wide bailout to the tune of 15-20 per cent of the economy.

"So overnight, in my simulations, I would expect a 12.9 per cent drop in the gross galactic product and that number could get up to anywhere up to about a 30 per cent drop, which is greater than the 26.7 per cent that the U.S. felt during the great depression."

But here's where the research rubber really hit the road.

Feinstein dug for evidence of a central bank in the Star Wars world. He pored over the movies, the books and the TV cartoon shows. One of his favourite findings was in The Clone Wars animated television show. In one of those episodes, it's revealed that a giant, intergalactic banking clan was deregulated during the Clone Wars.

"This is a B-plot in one of The Clone Wars cartoon series episodes, where they deregulate the banks. So we know there's this massive bank [and] there are many other banks besides just this one. We know that in the end, if these were to fail, there's no government backstop," which, Feinstein says, leads to disaster.

Economics and finance, much like the Force as explained by  Jedi  Master Obi-Wan  Kenobi , is created by all living things. It surrounds us and penetrates us; it binds the galaxy together.- Economist Zachary Feinstein

A disaster that's made readily clear in last year's instalment of the Star Wars movies, The Force Awakens.

"And really, we see this in Episode VII, on [the planet] Jakku; they're just scavengers on fallen spaceships."

Economics are weirdly intertwined throughout this fictional universe. The Empire began its rise after a failed trade deal and an invasion of a planet named Naboo by an organization called The Trade Federation. Banking clans pop up in some of the side stories.

Do or do not — there is no try

The Old Republic dies in a wave of protectionism and paranoia, as unrest and distrust give rise to a strongman who becomes a ruthless authoritarian.

"For millennia before the prequels, there was economic stagnation," says Feinstein, when asked if the real world has any similarities to the Star Wars economy. "There was no economic growth for 25 millennia. So this is going to foment unrest, it's going to create a situation where war is certainly possible, where authoritarianism is certainly possible."

"Economics and finance, much like the Force as explained by Jedi Master Obi-Wan Kenobi, is 'created by all living things. It surrounds us and penetrates us; it binds the galaxy together,' " Feinstein wrote in his paper.

It's not the usual stuff of university economics departments. But Feinstein has found no small measure of fame as a result of the paper. He's appeared on TV shows and been the subject of magazine and newspaper articles ever since it was published a year ago.

When he pitched the idea, he says the university jumped at the chance to showcase his research in a way that so many people would find accessible.

"They loved the idea," he says. "Taking my real research and doing this public outreach on something I love and something so many people love, it just really took off."