Did Saudi Arabia just blink on oil production? Jury is out

There's an old market saying: Buy on mystery, sell on history. Rumours are often more optimistic than the actual news. That was certainly the case with the announcement that Saudi Arabia, Russia, Qatar and Venezuela will freeze oil production at January levels. 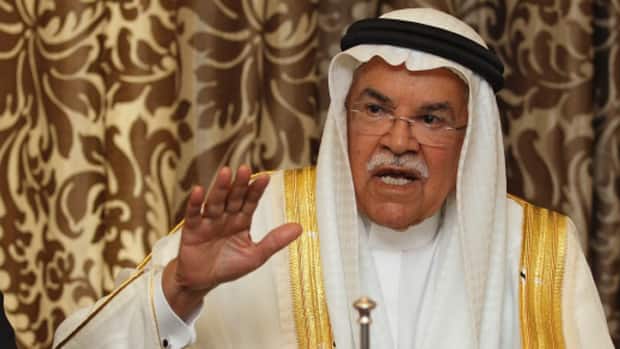 Rumours are often more optimistic than the actual news, which was certainly the case with the announcement that Saudi Arabia, Russia, Qatar and Venezuela will freeze oil production at January levels, if Iraq and Iran can be convinced to do the same.

Chatter that a deal was pending between OPEC and non-OPEC producers caused oil prices to jump eight per cent last Friday. When the actual news came out, oil rallied briefly before losing ground and closing, once again, below $30 US a barrel.

The social contract in Saudi Arabia is that we don't tax you, we give you all these generous benefits and goodies from the state, and in return, don't expect any political voice or transparency.- Bessman Momani, University of Waterloo

The reasons are pretty clear. Even ignoring the fact that Iran has already declined to freeze its production, the move by Saudi Arabia and others doesn't actually solve the problem of oversupply.

"We're producing about 1.5 million barrels a day more than the world is consuming," said Jackie Forrest, vice-president of energy research at ARC Financial.

In January, Russia was producing nearly 11 million barrels of oil a day and Saudi Arabia just over 10 million barrels per day. While not a record, those are still historically high levels that do nothing to ease the glut.

"What it does do is ease the risk that oil will drop further from here," said Forrest.

Shortly after the announcement was made in Qatar, Iran said that it does not intend to freeze production. Earlier this week after the lifting of sanctions, Iran sent its first oil tanker in four years to Europe.

Iran wants to win back the market share that it lost to Saudi Arabia and other countries while under export sanctions for its oil.

In January, Iran said that it intended to increase production by 500,000 barrels a day. The country is thought to have 46 million barrels of petroleum stored offshore and up to 40 million barrels stored on shore. It wants that oil to get to market.

For its part, Iraq is producing record amounts in order to rebuild and to fund its war with the Islamic State. Oil ministers from those countries and Venezuela meet in Tehran today to talk details.

The Wall Street Journal reported that Iran may be offered a special deal to increase its output above January levels.

Something like that will probably be needed, said Forrest. "Iran just had its sanctions lifted. It's very difficult  to get an agreement across all of OPEC until Iran can really prove out how much production they ultimately can bring online."

Saudi Arabia has been playing the long game with the oil market since November 2014, when OPEC first declined to cut production in reaction to falling prices. Until now, it appeared to ignore all pleas to support the market.

And while Saudi Arabia still has a huge cash buffer, it is feeling the pain, running a deficit close to $100 billion, increasing fuel prices and implementing a sales tax, its first tax on citizens.

"The social contract in Saudi Arabia is that we don't tax you, we give you all these generous benefits and goodies from the state, and in return, don't expect any political voice or transparency, and definitely no representation," said Bessma Momani, a political science professor at the University of Waterloo.

As the money tree has started to dry up, there have been mutterings of discontent.

"What we've seen online in terms of domestic discontent is: 'Where is all the money? Why are we in the dark on things?'" said Momani.

"And more importantly, if you aren't going to give us these generous benefits, why should we hold up our end of the contract in terms of being apathetic citizens?"

"That's basically a political risk that Saudi Arabia was taking."

Saudi Arabia's willingness to at least freeze production remains a positive sign for the energy market.

Bloomberg reported Tuesday that diplomats have been working behind the scenes for a year to forge a deal that will see both OPEC and non-OPEC producers cut production.

That was the first step. The meetings today in Tehran with representatives from Iran and Iraq will mark the next phase of negotiations.

Forrest believes that there is a path to a balanced oil market by the end of the year, if three things happen: Demand continues to grow; Iran brings a limited amount of production to the market; and gains by Iran are offset by production cuts in the rest of the world.

That may sound like a tall order, but she says all three are likely at current prices.

"If all those three things happen, we could have a balanced market by year end and that would mean stronger prices."