Yes, the sharing economy is now serving dinner. There’s Airbnb for people to run a hotel in their residence. And now multiple websites are popping up where people advertise takeout food services or restaurants run out of their homes. 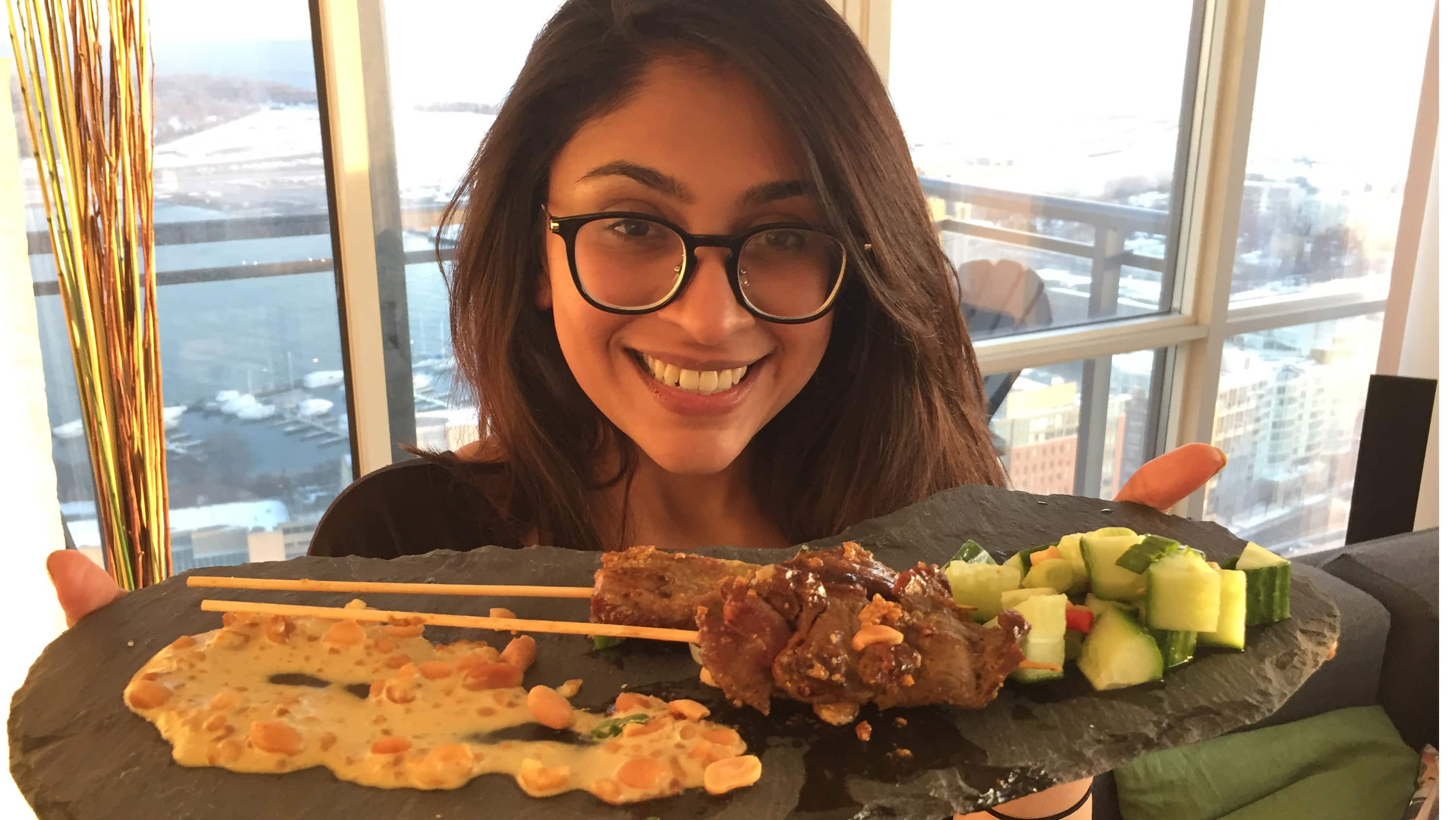 Dine out at a home restaurant in Toronto

5 years ago
4:11
Nadya Khoja and roommate Sarah Lee run a restaurant out of their Toronto condo called Chez Lisgar 4:11

Nadya Khoja grinds pepper over brussels sprouts sizzling on the stove. Her roommate, Sarah Lee, mashes feta, butter and parsley in a bowl.

The evening's menu was carefully planned: brussels sprout salad topped with apples and walnuts, followed by macaroni and feta cheese with tiger shrimp.

Khoja adds that they do know the guests' names and a few details they gleaned from Facebook.

"We look them up," she explains, "Just to verify that you're a real person, that you seem relatively normal."

Khoja and Lee find Facebook a useful filter when accepting dinner reservations at Chez Lisgar — the unofficial restaurant they run out of their tiny Toronto condo on Friday nights.

Neither are professional chefs: Lee works in sales and Khoja in marketing. But both the 24-year-olds have a passion for food.

They began their venture a couple of months ago, after realizing they always cooked too much for just the two of them. The roommates decided sharing their meals would be a great way to meet new people.

"When we told our families what we were doing, there was a bit of concern. You know, just this idea of inviting complete strangers over," says Lee. "But we've only had positive experiences so far."

Yes, the sharing economy is now serving dinner. There's Airbnb for people to run a hotel in their residence and Turo for folks who want to rent out their own cars. And now multiple websites are popping up where people advertise takeout food services or restaurants run out of their homes.

Home restaurant sites include Feastly which operates out of the U.S. and Israel-based startup EatWith, where people can make dinner reservations at residences across the globe.

Cheaper than a restaurant

The cost of a home restaurant meal is typically much less than the bill in a real establishment, but not everyone wants cash — some settle for a trade.

While a number of home eateries are turning into a real business, no money changes hands at Chez Lisgar. Khoja and Lee prefer the barter system, so they ask guests to supply the alcohol.

"We don't make a profit but we definitely make our money back in wine," says Khoja.

The two roommates began by advertising Chez Lisgar on a bartering website called Bunz. They soon found themselves inundated with requests, so Khoja created a separate site where potential guests could learn about the restaurant and sign up.

"Then we could just alert them whether or not they made the cut," explains Khoja. That's right — Chez Lisgar has become so popular, at last count, there were 300 people on a waiting list.

"The response we got was so overwhelming. It really kind of showed there is this yearning for this connection with people," says Lee.

And for those who are hungry but can't stay for dinner, there's a growing number of websites where people can order homemade takeout.

Site member Halima Iqbal advertises her dishes a couple times a week, charging between $10 to $12 per meal.

On the day CBC News spoke with her, she was preparing to charcoal grill 20 beef satays. She planned to post them for takeout on MealSurfers, each one served with peanut dipping sauce and a cucumber relish.

She later reported that she sold every meal.

"It's been a great experience," says Iqbal, a 27-year-old financial analyst and chef-in-training at Toronto's George Brown College.

She explains she's not selling food from her Toronto condo for the money, but instead for the experience.

"It's about getting to know my neighbourhood and share what I'm cooking and get feedback."

What would health inspectors say?

Iqbal says so far the feedback has been positive. But one concern people might have is food safety. While restaurants are scrutinized by local health authorities, who's inspecting the hygiene at home establishments?

Iqbal says Toronto Health has randomly inspected some MealSurfers home cooks. She hasn't yet been inspected, but says she knows and follows the rules.

At Chez Lisgar, Khoja admits health authorities haven't knocked on her door. But she says she has a background in foodservice, a food handler's certificate and that she and Lee follow proper procedure.

And food safety appears not to be a concern for Khoja and Lee's guests on this night. Shortly after 8 p.m., the two mystery guests arrive, bearing beer and wine.

Guess who's coming to dinner?

The two hosts soon learn that guest Alex Cioppa is a social media specialist and her friend Jordan Leung is a college student.

Khoja serves the food, Lee pours the wine and they all sit down together to eat. Immediately the conversation starts to flow. The foursome talk about everything from their careers to their love of food.

Leung admits that she was a little nervous about dining at the home of strangers but had decided it was worth the risk.

"It's very intimate and nice and I feel excited to be here," she says after downing the macaroni and feta cheese and declaring it delicious.

She informs her hosts she feels "right at home."

"It's a great concept," adds her friend, Cioppa. "It's a very enjoyable way to spend an evening."

As the dinner conversation continues, everyone reaches the same conclusion — that sharing food is also about sharing a new experience.

"There's something very magical about it," says Lee.