Transport Canada is refusing to release details about a wide range of safety issues detected on Canada's railways, saying that making such information public could jeopardize companies' commercial interests and violate the secrecy provisions of the Transportation of Dangerous Goods Act. 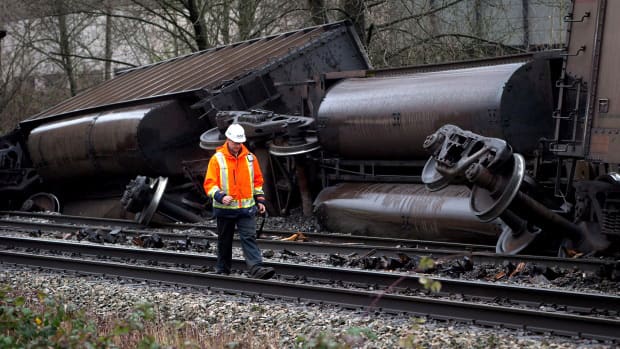 Transport Canada is refusing to publicly release details about a range of safety issues detected on Canada's railways.

A CBC investigation has found the federal regulator has withheld — or blacked out key findings in — a number of documents related to railway safety that were requested by community groups and the media under Canada's access to information law.

The requested documents included an audit, risk assessments for CP, CN and other rail companies, orders, notices and letters of concern. Of the 21 document requests made by CBC in 2015, most came back with redactions, and in the case of several key safety reports, specific details were completely blacked out.

I think it is ridiculous that we have to fight this hard and work this hard in order to find out information that affects our daily lives.- Patricia Lai, Safe Rail Communities

"I think it's ridiculous. We should be told. We should know," said Patricia Lai of the group Safe Rail Communities, which asked Transport Canada for copies of risk assessments for all major railways and information about dangerous goods passing through communities.

She and her neighbours started the group after learning the train of crude oil tankers that derailed in Lac-Mégantic, Que., in 2013 had earlier passed along CP tracks just metres from their west-Toronto homes.

"It passed right through the middle of Toronto, and I think it is ridiculous that we have to fight this hard and work this hard in order to find out information that affects our daily lives," Lai told CBC News.

Railways can block release of records

Transport Canada refused to release copies of any risk assessments submitted by rail companies to regulators, saying it could jeopardize the companies' financial and commercial interests and violate the secrecy provisions of the Transportation of Dangerous Goods Act.

"We were denied," Lai said. "They claimed four exemptions on our request. It's a 52-page document, and they said that we were not allowed access to those records."

Officials maintain there are valid reasons to consult rail companies before making such records public. They say Canada's access laws demand that "third parties" be consulted and be given the right to object to public release of government records if the information will hurt their competitive interests.

CBC News has hit up against similar objections and secrecy when trying to obtain various records concerning railway safety.

For instance, Transport Canada inspectors identified a "national risk issue" at CP in 2014 and notified government staff across the country.

CBC applied under the Access to Information Act for a copy of the bulletin. The department released it but first blacked out all key details, citing numerous exemptions, most notably, CP's "third party" rights to confidentiality.

CBC then asked Transport Canada what the "national risk issue" at CP was and what has been done to correct it. The government department refused to answer and late Monday issued a statement indicating CP had vetoed any public release of records related to the issue.

"Under the Access to Information Act, the third party may raise objections to the release of information by citing specific provisions in the act and justifying their recommendations," Transport Canada said in a statement.

The regulator has used blanket redaction to conceal large portions of numerous government documents related to rail safety, including letters and notices sent to VIA Rail and a 2015 national audit of CP's fatigue management practices.

"When media can do their jobs of holding us to account and asking tough questions, when disclosure and access to information is just the way Parliament behaves, … you get the kind of government that Canadians expect and deserve, and that's what we're going to be working very, very hard to deliver," he said in an address outside the Governor General's residence.

When you're regulating a company, violations, incidents, everything should be known. It's not embarrassing the company. It's doing your job as a government.-Ken Rubin , public-interest researcher

Ken Rubin hopes that will be the case. He is an award-winning public interest researcher who has spent years filing access to information requests to probe all manner of government programs, including regulation by Transport Canada.

He says for too long, bureaucrats have prioritized and protected industry secrets over the public's "right to know."

"It's erring on the wrong side," Rubin said. "It's saying that anything that remotely connects with the company shouldn't be released, but the fact of the matter is when you're regulating a company, violations, incidents, everything should be known. It's not embarrassing the company. It's doing your job as a government, as government inspectors."

He says he's trying to remain optimistic that the new federal government will turn over a new leaf. However, he says, the commitment to openness is already being tested by recent demands for the public release of a report on human rights in Saudi Arabia related to the controversy surrounding a Canadian-Saudi arms deal.

"Public right to know means that you get information and it's used and that people are held to account who produce it. And that results in public discussion, debate, and if there's embarrassment or if there's wrongdoing or if there's just good behaviour, that's where it falls," Rubin said.