A Calgary economist suggests the time is right for the Alberta government to consider selling the bank that it owns, ATB Financial. 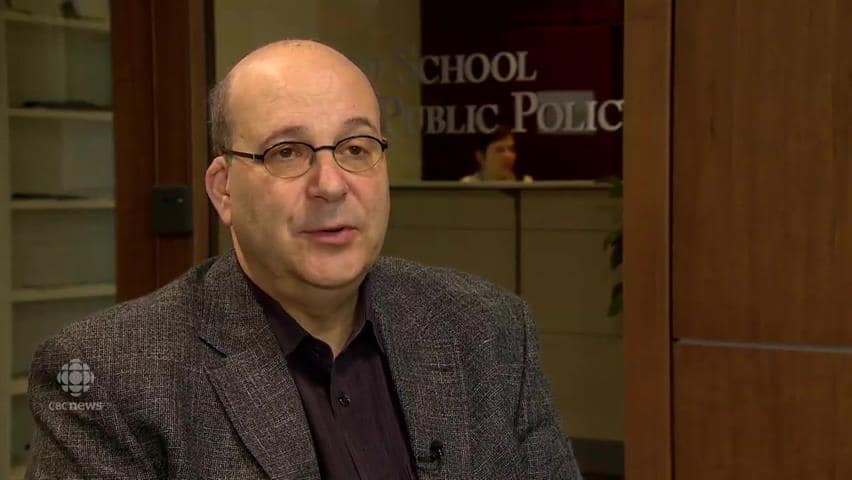 Should Alberta consider selling its bank?

6 years agoVideo
1:27
A Calgary economist suggests the time is right for Alberta to sell its bank 1:27

For a province racking up debt and trying to tackle the sharp drop in oil prices, now might be the time for the Alberta government to consider selling the bank that it owns.

That's the suggestion of one Calgary economist as the provincial government is facing a $7-billion shortfall in the upcoming year because of falling resource revenues. Privatizing the bank would provide some temporary financial relief for a province which could be forced to raise taxes and lay off public sectors workers as part of its budget later this month.

The Alberta government has owned ATB Financial since it was created 77 years ago.

"Why is Alberta, which is a province which understands privatization, still continuing to have a public enterprise in the banking sector?" says Jack Mintz, chair of the University of Calgary's School of Public Policy. "It's really something from the past."

As a crown corporation, ATB does not pay corporate taxes, but instead provides a payment in lieu of taxes to the provincial government. On profits of $384-million in 2013-14, ATB paid the government $82-million.

Alberta has privatized many of its crown corporations such as the Alberta Energy Company (now Encana), Alberta Government Telephones (now Telus) and Pacific Western Airlines (eventually swallowed up by Air Canada after a series of ownership changes).

The province also has a deregulated electricity market and free market liquor retailing.

The government started the bank in the Depression to give Albertans a new source of credit. ATB operates in almost 250 communities in Alberta. In some of those locations, it is the only bank in town, which raises concern whether a sale would result in shutdown of the small branches.

"You can have a privatized business like ATB that continues to support small businesses. It doesn't necessarily have to change its function," says Mintz.

He also suggests the government would likely be able to include protections in a sale to keep the local service available in dozens of small towns like Magrath, Enchant and Hythe.

But not everyone agrees selling ATB is a good idea.

Just because the Alberta government faces financial pain right now, doesn't necessarily mean now is the best time to sell, according to Janice Plumstead, economist with the Canada West Foundation, a Calgary-based think-tank. She suggests the government would fetch a far better price if it waits a little longer.

"I don't think a fire sale is the right thing to do, I don't think it is a short term solution," says Plumstead. "The Alberta government has really made a strong case for getting out of business enterprises and I think ATB is probably the last crown corporation they have that is in that model, so I could see in the middle to long term that the government would consider doing something different with ATB than they are now."

A spokesperson for Alberta`s finance minister says he hasn`t heard discussion about privatizing ATB, although he wouldn`t rule it out as a possibility as part of the upcoming budget.