War veteran Chad Miron has endured a five-year road to recovery from post-traumatic stress disorder. He says his biggest saviour has been his service dog. Ottawa is now looking at using specially trained service dogs to help other veterans with PTSD. 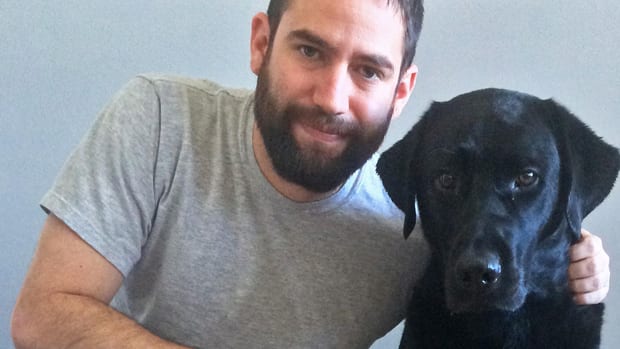 Watch how a dog helped one veteran conquer his PTSD

5 years ago
6:05
When Chad Miron returned home from his tour in Afghanistan, he began a new battle with PTSD. The Canadian veteran got a service dog to help him cope. Now he says his canine companion is largely responsible for his recovery. 6:05

When Chad Miron's mind wanders back to the terrors of war in Afghanistan, he has a way out.

With one simple cue, Norman, his service dog, can break the former soldier's descent into darkness.

His canine companion has been specially trained to help veterans who suffer from post-traumatic stress disorder (PTSD). When Miron has a flashback, he just has to say the word, "Nudge," and Norman snuggles his black furry head in close, lavishing Miron with attention.

"It kind of snaps you out of whatever you're feeling and you have this kind of cute, giant dog in your lap so how can you be mad at that?" says Miron, who lives in Hamilton, Ont.

The Canadian veteran has endured a five-year road to recovery that has included therapy and numerous medications. But the 31-year-old says his biggest saviour has been his service dog.

"Out of everything I've gone through and done, the dog has probably helped the most," he says.

"The counsellors that are working with these folks, they're seeing an immediate profound impact and [saying], 'Wow, there's something going on here,'" says Danielle Forbes, executive director of National Service Dogs in Cambridge, Ont. Her charity breeds and trains service dogs.

With the help of volunteers and donations, Forbes' organization and other non-profits like hers provide the dogs for free. But veterans must pay for the animal's care themselves, a struggle for some. The federal government covers dog care expenses for former soldiers with physical disabilities, but not for those with PTSD.

"Food gets expensive, vet bills, we all pay for that ourselves," says Miron.

But that could change. Veterans Affairs has told CBC News in an email that it is currently recruiting up to 30 former soldiers with PTSD for a pilot project to help it "better understand the short to long-term impact of a service dog."

The government will cover the dog care costs and it's possible the project's outcome could lead to widespread dog care coverage for all veterans who qualify.

Miron applauds Ottawa's interest but questions the wait. The pilot project is expected to end in late 2017. Miron says his success and the success of others paired with the dogs show further study isn't needed.

"There's their pilot program right there. We know first hand what these dogs have done for us," he says.

Miron's journey began back in May 2010. That's when he started an eight-month tour that began in one of the most frequently attacked outposts in Kandahar Province, Afghanistan.

The Taliban attacked almost daily with gunfire and rockets.

"That was not the worst part of it," says Miron.

The worst part was the constant threat of stepping on explosive devices or IEDs when on patrol. "[It] starts to wear down on you," he says. "It brought a strong sense of our mortality, like, any day, we could die. The odds are pretty decent."

Miron witnessed his section commander being hit by an IED blast. Miron gave him first aid. The commander survived but lost his leg.

The veteran says his most difficult day was having to transport the remains of a fellow Canadian soldier who was killed by another IED.

When asked how that experience affected him, Miron said he was traumatized by it. "I knew that it would affect me later on, but, at the time, I just kind of took it all in and buried it."

Miron quietly absorbed all the horrors he witnessed. And when he returned home in December 2010, he found that he couldn't cope.

He was angry all the time, would pick fights in bars, and started drinking heavily.

"Eventually, I started completely avoiding my friends. So I just basically became a hermit, locked myself away," he says.

Dog to the rescue

Miron was diagnosed with PTSD and took up to five medications daily to help him sleep and combat his depression and anger. "The medication just turned me into a zombie," he says.

Then his psychologist suggested he try working with a service dog. "I was ready to try anything at that point," he admits.

Miron got his first dog, Juno, in 2011. With the added comfort and security of his furry friend, he finally felt comfortable enough to slowly venture out in public.

The lab crossbreeds trained for the veterans are bred to be good-natured and eager to please. "He's kind of got your back, he's always calm, keeps a smile on your face," says Miron, referring to Norman, who became his service dog last year after Juno died of cancer.

Juno and Norman were also trained to perform special tasks. In a bookstore, Miron shows how, by commanding the dog to "block," Norman will stand next to him and prevent strangers from getting too close.

Miron explains that his anger can escalate in crowded situations. "The dog helps create that space by blocking people, forcing them to go around you."

By saying the command, "seek it," Norman will also search Miron's home, just to let the veteran know he's safe. Miron explains there were times after his tour when he still felt as though he was under attack.

"You're always preparing for the worst," he explains. "Having the dog, he provides you with that sense of home, that sense of security."

Norman can also stop Miron from slipping into dark moods. "He'll know when I'm angry and he'll come up to me and try to get me to pet him.''

Miron says that even though he'll never be the same person he was before he left for Afghanistan, he's coping much better today. And he believes he owes his recovery largely to his service dog.

Although Miron dislikes the idea of a long study, the veteran says he's pleased the government is finally paying attention to what he believes is an effective therapy for PTSD.

"[A] big part of it is just realizing you're not broken, it can get better, you can heal and the dogs help a tonne with that," he says.