The Canadian economy is growing like gangbusters in a number of ways, but the governor of the central bank still doesn't have to look very hard to find things to worry about.

In addition to debt loads and job prospects, central banker singles out cyberthreats as reason for worry

It's hard to blame Stephen Poloz. After all, his entire term as governor of the Bank of Canada has been dominated by lousy news. He used to call it "serial disappointment." So, even as the Canadian economy starts churning out a solid, even enviable performance, Poloz is still finding news that keeps him up at night.

"We've had a great year," he told CBC News Network's On The Money. "Since I became governor, it's the first really good year. All the rest we've just been playing defence."

In a year-end speech to the Canadian Club in Toronto on Thursday, Poloz spoke about the three things that keep him up at night:

Those all sound like valid reasons for him to be losing sleep, but after years of trying to manage an economy that was stuck in the mud, Poloz has a quite philosophical approach to the biggest headache of central bankers the world over: fear. 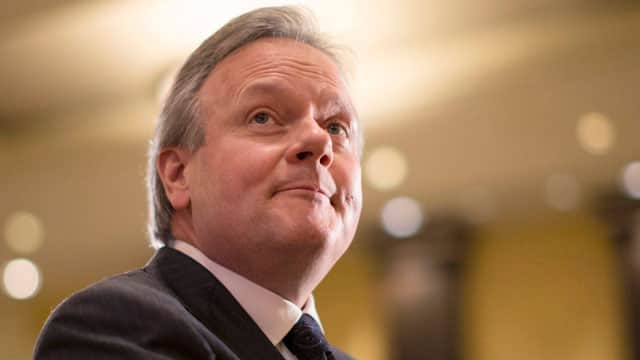 3 years ago
13:38
Bank of Canada governor sits down with On the Money host Peter Armstrong for a year-end interview 13:38

He says a lot of people think of a central banker as a sort of engineer; you know what the economy is doing and make little tweaks to nudge it in the right direction.

"But in reality we don't know enough to do that," he says. "And if you take that uncertainty into your policy making instead of just assuming it away… then you start thinking of it as more of a risk management exercise."

And even though the economy is performing well, there's a lot of risk to manage. Jobs are up, trade is doing well, wage growth is finally beginning to show some signs of life and even business investment is looking better. But concerns are piling up over various trade deals, there is still slack in the labour market and the United States central bank is now aggressively moving ahead with rate hikes.

Amid all the things he is concerned about, Poloz shrugs off the notion that Canada will have to play catch up if the U.S. Federal Reserve raises rates, even a few times next year.

He points to the beginning of the collapse in oil prices in 2014. Then, the Fed raised rates while Canada cut them twice in the same year.

"So that's proof we can have an independent policy."

But more to the point, he says that oil crash delayed Canada's recovery. So, he says, we are now a year or two behind the U.S.

"We have some more time in front of us," says Poloz. "So we can have our own independent policy while the Fed goes about its business."

In a lot of ways, central bankers aim to be boring. They try very hard to convey a calm, thoughtful take on the sometimes very wild rides an economy takes us on. The downside is that they can retreat to dense, jargon-heavy economic analysis and avoid plain language.

That is decidedly not how Poloz is approaching the "mania" — as he calls it — of bitcoin.

"Perhaps the most one can say is that buying these things means buying risk, which makes it closer to gambling than investing," he said in his speech.

Afterward, he was even more blunt.

"All I know is right now the chart looks like the left-hand side of the Eiffel tower," he said. "That's pretty rare in the financial business," and rare things are exactly the sort of things that central bankers tend to notice.

Because in a way, that's the job of the central banker: To look for black swans and dark clouds, even when none seem visible on the horizon.

The cryptocurrency people can't stop talking about is up more than 1,600 per cent in a year, but huge drops have been common along the way. The stodgy world of central banks don't often have to deal with whirlwinds like that, so count bitcoin among the things that Poloz wouldn't normally have on his closely monitored radar.

Old school economic indicators like inflation and the job market may normally be the things that central bankers spend their time worrying about. So perhaps Canada's central banker can take comfort in bubbly bitcoin giving him a few new things to keep him up at night.