About two dozen chanting protesters took over a Starbucks in Philadelphia on Monday, days after two black men were arrested when store employees called 911 to say they were trespassing. 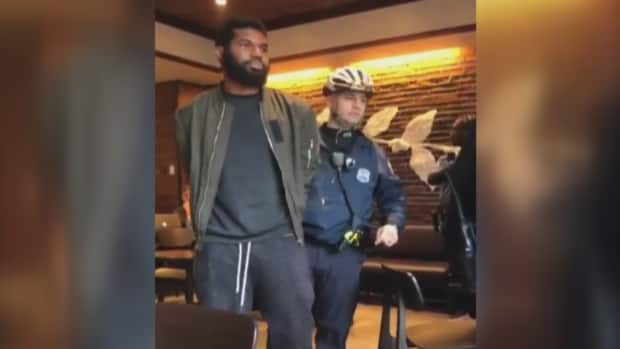 Johnson, who has called the arrests "reprehensible," arrived in Philadelphia this weekend after video of the arrests gained traction online. He said he hopes to meet with the two men in the next couple of days and apologize to them face-to-face.

"I'd like to have a dialogue with them and the opportunity to listen to them with compassion and empathy through the experience they went through," said Johnson, who has been CEO about a year. A lawyer for the two men who were arrested didn't immediately return a call for comment.

The incident is a major blow to Starbucks' image, since the company has promoted its coffee shops as neighborhood hangouts where anyone is welcome. After a video of the arrests spread online, the hashtag #BoycottStarbucks trended on Twitter.

And on Monday, about two dozen protesters took over the Philadelphia shop, chanting slogans like, "A whole lot of racism, a whole lot of crap, Starbucks coffee is anti-black." A Starbucks regional vice president who attempted to talk to the protesters was shouted down.

"We don't want this Starbucks to make any money today. That's our goal," said Abdul-Aliy Muhammad, one of the protest's organizers and co-founder of the Black and Brown Workers Collective.

Over the weekend, demonstrators called for the firing of the employee who contacted police, who arrested the men on Thursday. Starbucks did not immediately respond to a request to confirm a report that the manager who called police had left the company.

Officials have said police officers were told the men had asked to use the store's restroom but were denied because they hadn't bought anything and they refused to leave.

Video shows several police talking quietly with two black men seated at a table. After a few minutes, officers handcuff the men and lead them outside as other customers say they weren't doing anything wrong. A white man identified as real estate developer Andrew Yaffe arrives and tells the officers the two men were waiting for him. An officer says the men were not complying and were being arrested for trespassing.

"Why would they be asked to leave?" Yaffe says. "Does anybody else think this is ridiculous? It's absolute discrimination."

A woman can be heard in the video saying "they didn't do anything, I saw the entire thing."

Police haven't released the names of the men, who were later released after the district attorney's office said there was lack of evidence that a crime had been committed.

Johnson said the company will ensure that employee guidelines on when the police should be called will be clarified.

Asked if the incident was a case of racism, Johnson responded: "Starbucks was built around the concept of a third place where we create a warm and welcoming environment for all customers. What I do know is that did not happen in this instance. And that is what we're focused on."

Philadelphia-born comedian Kevin Hart had taken to Twitter on Monday to vent about the arrests, saying the company failed to take advantage of an opportunity to call out racial profiling. He says the employee who called police should have been fired.

On Sunday he tweeted "Our city is shining bright like a diamond right now. Please make this situation right."

Seattle-based Starbucks had posted a statement on Twitter over the weekend about the arrests, followed by an apology from Johnson.

"Every company makes mistakes, but great companies are the ones that learn from those mistakes and take appropriate action," Johnson said Monday. "And that's exactly what I intend to do. We're reviewing all aspects of this."