Former workers aren't flocking back to the oilpatch

After a lengthy downturn, some workers lack faith in the industry and are reluctant to return to it. Many have left Alberta to go back to their home provinces, while others have found new opportunities.

After such a nasty downturn, some workers don’t trust the industry

Jennifer Gouin remembers the January morning when she became a victim of the oil price crash. She had worked in the energy industry for a decade, split between two large oil companies.

As the winter came to an end and the weather warmed up, she found the energy to move on and begin a new adventure. She had a hobby of making skin care oils for friends and family. The side project became her business.

You get angry, you get confused, you get sad.- Jennifer Gouin about losing her job

After a lengthy downturn, some workers lack faith in the industry. Many have left Alberta to go back to their home provinces, while others have found new opportunities. That's a problem for the industry as activity ramps back up again and there's suddenly a shortage of experienced labour.

While there are jobs to be found in the oilpatch, workers are less willing to cope with the swings in employment.

Instead of going back to the oilpatch, Gouin now fills online orders for her custom blends of face, body and beard oils for her business, Jennifer Joan Skincare. 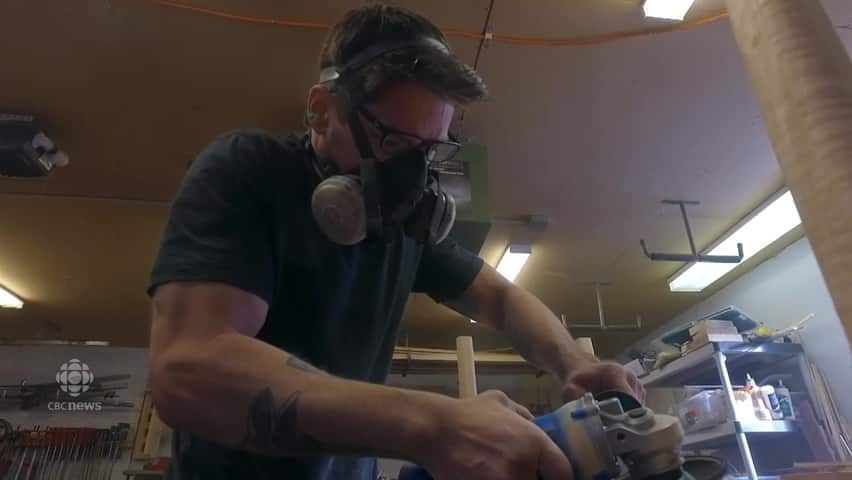 Will former oilpatch workers move on or return once the industry gets back on its feet?

4 years ago
3:24
Tens of thousands of oilpatch jobs were lost because of the oil price crash. 3:24

Gouin said she worked for a great company, had fun co-workers and collected an excellent paycheque, but she can't see herself going back to the corporate oil towers of downtown Calgary.

The oil price crash forced energy companies to slash spending and eliminate jobs in Alberta, Saskatchewan and Newfoundland and Labrador. According to one estimate, 43,000 jobs were cut between December 2014 and May 2016.

Oil prices have recovered a bit and stabilized enough for companies to begin hiring again, although modestly. What some companies are discovering is that former workers aren't eager to come back.

"We've had some employees leave the industry and say 'Look, I've got a young family, I can't handle the cyclical nature of the business. I need to know I have got a more stable job.' And we respect that," said Ed Oke, human resources vice-president with Calfrac Well Services.

Calfrac cut its workforce from 5,200 before the downturn to 2,500. With a slight recovery in oil prices, the number of employees at the Calgary-based service company is up to about 3,000.

"Typical cycles in this business are three or six months a year sometimes," said Oke. "This two-year cycle forces people to look at other alternatives. And then you call them and say 'Look, we'd like you to come back' — they are gun-shy."

The decision to come back to the industry isn't always an easy choice, even for lifers.

Dallas Gara was 14 when he got his first job in the oilpatch, spending summers at remote sites throughout the province checking on wells and facilities and doing maintenance work. After graduating from university, he worked as a geophysicist.

After nearly 25 years in the industry, he was laid off last year. Like Gouin, he had a hobby on the side — making custom furniture — which he turned into a business, GaraWood.

"The day after I was laid off, I was in my shop working. I could hit the ground almost immediately," he said.

The transition hasn't been easy. He still has a mortgage to pay, but without the benefit of a steady oil and gas paycheque. Instead of working nine-to-five, he grinds away in his garage for 12 hours a day.

Recently, Gara accepted a temporary contract with an energy company. The opportunity was a good fit because he was familiar with the company and the natural gas basin he would be focusing on.

"I took a year, built the business, and now I feel like I am at the point where I can balance the two," he said. "It's nice."

If the oilpatch gets back on its feet, Gara may resume his career full-time. He's undecided. He'll have to gauge his woodworking business and figure out what makes the most sense. His decision will be difficult because he loved his job as a geophysicist, but he has a passion for woodworking and crafting new creations in his shop.

The money he made in the oilpatch helped him buy all of his tools and launch his business. The choice he'll have to make is whether he'll stick with the new opportunity or go back to his career if a stable job comes along.

"If oil and gas came back, I don't know, I would have to make that decision," said Gara. "I'd have to look at my life situation. Can I pay my mortgage?"