In Canada's oil industry, the hope of higher prices springs eternal, but it's a faith that's now being tested by the oilfields of West Texas - the once and current centre of the global oil world.

On a once-empty lot in Midland, Texas, rumour has it that a regional grocery chain just put up a temporary taco stand to keep drilling rigs — which need to give existing buildings a 150-metre berth — at bay until a new store is ready to break ground.

Tales of eager oil companies champing at the bit to drill within city limits are told by locals with a matter-of-fact shrug and a chuckle, but for the rest of the oil world, the sight of this unassuming taco hut isn't nearly as funny.

In the last year alone, Big Oil has spent more than $25 billion US on deals in the Permian basin, an area of West Texas and New Mexico about 2½ times the size of New Brunswick. The land grab, dubbed "Permania," has put the venerable oilfields back at the centre of the petroleum universe, a spot that not long ago was happily occupied by Canada's oilsands.

We always know we're better than everybody, especially down here in Texas, when it comes to drilling for oil- J. Ross Lacy, president of Lacy Oil Corp.

That was before a Saudi-inspired price crash in 2014 told the world at large that something profound had changed in the oil industry. Optimism briefly returned when OPEC agreed last fall to trim output and prices began to rise but that recovery has stalled in the face of more U.S. production.

Now, Canada's scuffling oil industry is left to wonder when — and perhaps even if — the good times might return.

"Right now, if you want to go make a buck in the oilfield you're in Midland, Texas, and you're out in the Permian Basin," said J. Ross Lacy, a fourth-generation oilman and the president of Lacy Oil Corp, a small private producer.

The Permian Basin isn't exactly the stuff of postcards. It's an oilfield in the middle of a desert, where, as locals say, they can't grow anything but mesquite and oil.

They are, however, doing the latter as well as anyone in the world, which is why land there is trading hands for 10 to 20  times the amount it would cost to secure prime acreage in Alberta or British Columbia.

The exorbitant amounts, upwards of $60,000 US an acre, seem to some like clear evidence of a bubble. But those on the ground in West Texas, who these days carry themselves with an easy confidence that could be mistaken for cocky, see it differently.

"You hear about Saudi Arabia and how it tried to break the American oil and gas producer and all it did was piss us off and we got more efficient," Lacy said during in an interview at his company's modest office space in a strip mall on the outskirts of Midland.

"We always know we're better than everybody, especially down here in Texas, when it comes to drilling for oil." 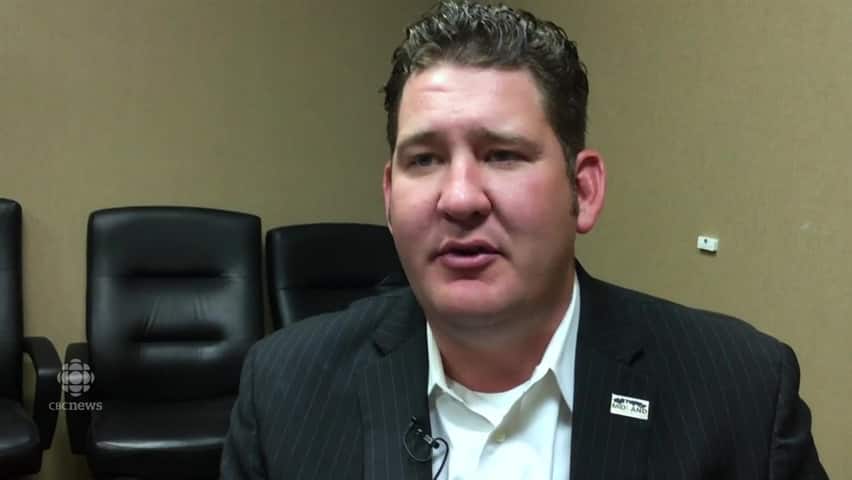 Next year, daily U.S. oil production will approach 10 million barrels, according to the Energy Information Administration, a feat made more remarkable given that in 2008, the country's output was at five million barrels a day and falling.

For West Texas, being in the middle of this kind of action isn't new.

'Geology is a gift from God'

In the Second World War, Allied forces were fuelled by the basin's vast reserves. Later, in the years around the Arab oil embargo in the 1970s, Midland — which sits at the heart of the basin, along with its nearby blue-collar sister city, Odessa — boasted wealth that's the stuff of oilpatch lore, including a neighbourhood Rolls Royce dealership and an airfield too stuffed with private jets to fit them all into hangars.

That ended when the oil bust hit in 1986. By the early 2000s, the Permian was an afterthought, its legendary oil reserves believed to be largely tapped.

In the last decade, though, breakthroughs in hydraulic fracturing and horizontal drilling have remade the basin's fortunes.

"A lot of the world is just finding out something that we who have lived out here a long time have always known, just the enormity of the resource we have here," said Clint Walker, general manager of Cudd Energy Services. "The geology is a gift from God." 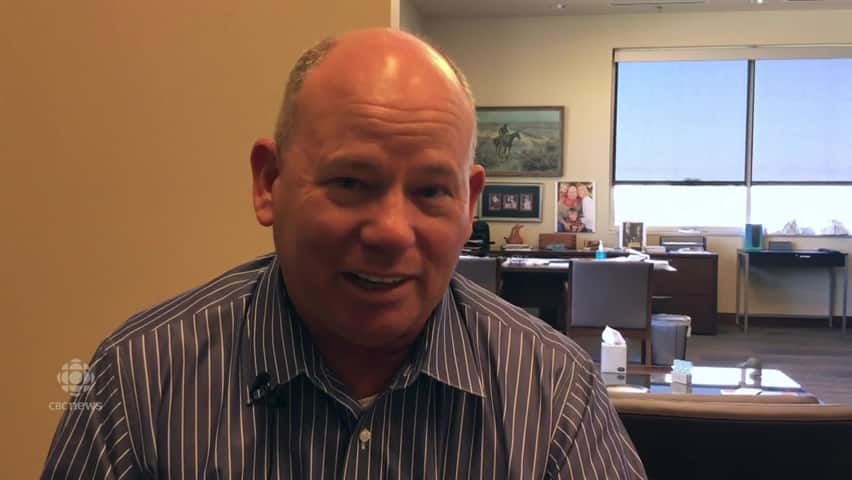 Clint Walker explains why the Permian is so special

3 years ago
0:45
The geology and infrastructure are two reasons why oil companies like the Permian basin in Texas 0:45

In the Permian, oil-bearing formations are stacked on top of one another, which means a single rig can tap into six or eight different zones, instead of just one pool.

At the same time, horizontal drilling allows wells to turn like a letter "J" and run laterally for more than five kilometres, which super-sizes the production that can come from the same piece of land.

Ultimately, a well site in the Permian may let a company target up to 20 oil-producing formations, said Walker.

The layered nature of the geology is the Permian's secret sauce, as well as the root cause of the global industry's anxiety over West Texas.

In its most recent oil market report, OPEC, for instance, just admitted that production from non-members is now expected to rise more than 60 per cent faster this year than previously forecast. Those gains, most of which can be traced to U.S. shale producers, are effectively negating the cartel's move to cut output by more than million barrels a day, a hard-won agreement among member nations that was supposed to be a panacea for low prices.

At last count, more than 40 per cent of the active drilling rigs in the U.S. — some 349 or four times the number at work in Canada — are operating in West Texas.

Apples-to-apples, the geology of the best places to drill in Western Canada stacks up well with the Permian, but geography is another matter. Canada is at the end of the pipe, meaning the costs to ship oil and gas across a continent puts the industry here at a disadvantage compared to those on the doorstep of Gulf Coast refineries.

Meanwhile, the equation for the oilsands is changing in different ways. When crude was trading in the triple digits and the idea of Peak Oil was en vogue, decades of guaranteed production drew global oil giants to northern Alberta like moths to a flame.

Now, the ability to add or subtract rigs depending on the price of oil looks better to some companies than locking up billions on long-life megaprojects. That flexibility is part of the reason Royal Dutch Shell and ConocoPhillips just reoriented themselves away from the oilsands and towards U.S. shale plays.

Politically, Shell and ConocoPhillips decisions to largely exit the oilsands are being cast by Alberta opposition parties as an indictment of the unfriendly business climate under premier Rachel Notley's ruling NDP party, with a dash of criticism reserved for the federal Liberals' handling of the pipeline file.

"Shell is waving goodbye to Alberta," Brian Jean, the leader of the opposition Wildrose party, said during question period. "The premier's plan is not working."

Partisan blame aside, along with the need to pay down debt, the rationale for both recent deals has more to do with what's right about U.S. shale rather than what's wrong with Canada.

"To say that it's Notley is unfair," said Peter Argiris, an analyst at Wood Mackenzie in Calgary. "Generally speaking, Alberta is a good place to invest; no company, person, or fund would tell you otherwise."

Canada's energy industry still has fans, as witnessed by the $3 billion Cenovus just raised to help fund its deal for ConocoPhillips's assets, so it's not like investment here will dry up, but it is fair to say that the bar to attract those dollars is now higher.

Compared to Canada, Argiris notes, Permian wells are cheaper to drill. The nature of the ownership is also better for big companies looking to establish large positions and a century's worth of pipeline infrastructure makes it easy to get oil to nearby markets.

Advantages such as those give West Texas an edge on more than just Canada. More and more, veteran oilfield workers like Rocky Thorpe, 45, find themselves making a pilgrimage to the Permian.

Until lately, Thorpe was driving a water truck in North Dakota's Bakken field, where he aimed to haul enough loads to earn $300 to $500 a day. After working for 10 days, he'd head back to Wyoming for five days off.  The money made the commute worthwhile, but when activity dwindled, he knew it was time for a change.

"If you're in the oilfields you have to be willing to pack up and go where the work is and [the Permian] is the hot spot for the United States right now," said Thorpe, on the sidelines of a job fair in Midland where he'd just accepted an offer, his third in as many days.

In the last three years, daily output from the Permian, according to the EIA, has climbed by a million barrels and now matches the oilsands at 2.4 million barrels a day, or a quarter of U.S. oil production.

"Things are getting ready to start popping here, really, by the end of the year," said Midland Mayor Jerry Morales. "Do we need to drill it all today and quickly? No. We can have this go on for 15 years."

The recent buying spree, locals believe, is only a precursor to the billions more that will be spent on drilling to justify those decisions. 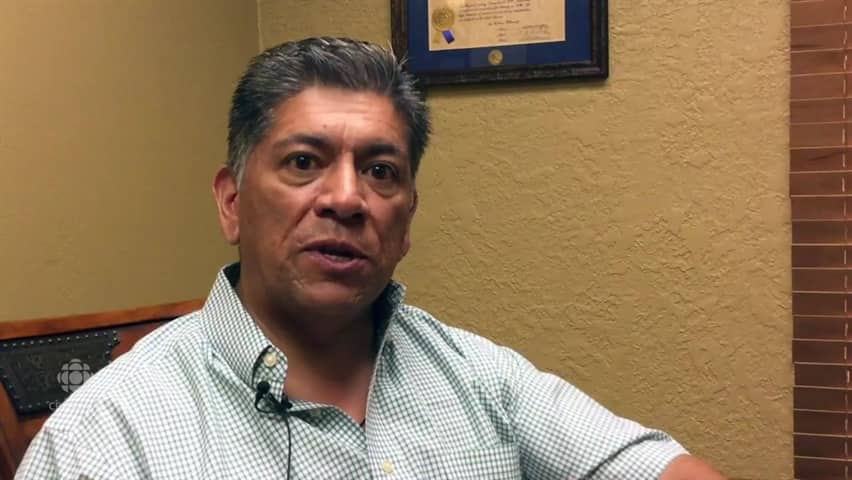 In Midland, Jerry Morales says oil companies can drill beside a church

3 years ago
0:42
The community and oil industry have a strong relationship. 0:42

Whether the outlook for future Permian production is actually making the rest of the oil world nervous is a matter of some debate.

The amount of new oil needed every year is certainly more than the Permian can provide on its own. In the meantime, though, production from West Texas can still knock down crude prices like a mallet in a game of whack-a-mole. Each time the price of a barrel pokes up its head, drilling rigs in the Permian get to work sending more oil into the market.

It's a grim dynamic for Canada's energy industry, not to mention a domestic economy that's just now recovering from an oil shock that lasted the better part of two years.

The global oil market will eventually rebalance and prices will rise, or so goes the prevailing thinking, but when that happens is no small matter. If other U.S. basins can mimic the Permian's success, then the timeline for higher prices could become uncomfortably distant for Canada.

In the oil industry, of course, hope springs eternal that lower prices only sow the seeds for higher ones to come. Only now the new reality of U.S. shale production, and the need for that taco stand, is testing that faith.

Paul Haavardsrud writes for CBC's western business desk in Calgary. He is also a producer on CBC Radio’s national business desk where he talks about business on Radio One in the afternoons. Prior to that he worked for newspapers. On Twitter, he’s @paulhaavardsrud.