Oil prices take another dive — can the oilpatch take it?

Oil trading closer to $40 US a barrel is unpleasant for the energy sector, but it is not quite as disastrous as it was three years ago. Years of suffering have made the energy sector more efficient.

The collapse of the oil-services company Sanjel in 2016 was typical of a no-good, terrible year in Alberta. The family-owned company had grown quickly and was carrying too much debt when the price of oil began to crash three years ago. It was sold off in pieces, at bargain prices, not netting enough to pay off its lenders.

Because government-owned ATB Financial was one of the bankers of Sanjel, it's likely that all Albertans took a hit on the company's demise.

We may not grow with all of the boom, but we're certainly not going to bust with all of  the bust.- Shane Hooker, Sanjel Energy Services

But Sanjel is back, albeit in much smaller form. ARC Financial, which bought some of the company's assets, also bought the name and now Sanjel is operating again in just one line of business, the cementing of oil wells.

Just as its collapse was emblematic of the over-leveraged oilpatch circa 2014, its re-emergence is typical of the oilpatch today. Sanjel is smaller, leaner and much more cautious, even though it expects to grow by 50 per cent in 2017.

"We've been very measured and disciplined in our growth, so that we're not growing and then retracting and growing and retracting," said Shane Hooker, chief executive of Sanjel Energy Services. 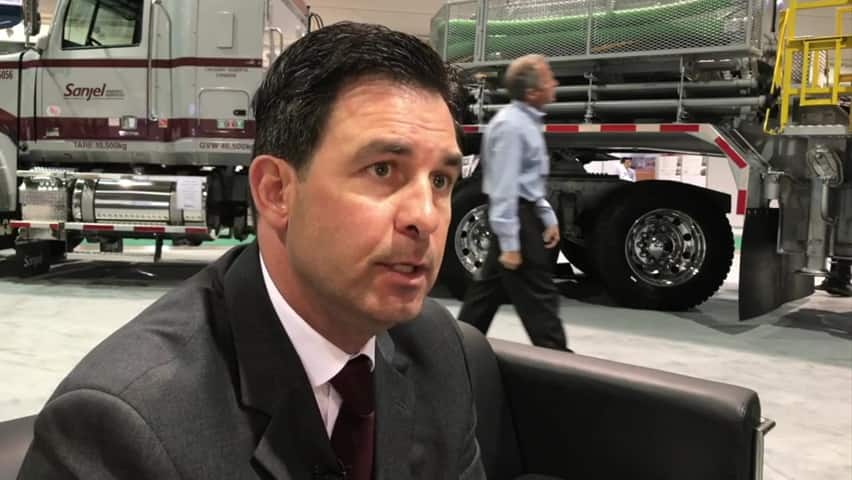 "We may not grow with all of the boom, but we're certainly not going to bust with all of  the bust."

Hooker said that he's optimistic, but expects a bumpy ride for the price of oil over the next two years. And a bumpy ride is what we're seeing already. Just as the energy sector got comfortable with $50 US oil, $40 US oil is beginning to look more likely.

The sentiment in the market has shifted since the most recent OPEC meeting in late May, when both the cartel and its non-OPEC partners promised to extend production cuts a further nine months. The market wants more: more cuts and more evidence that the the 300 million barrels in excess storage is starting to draw down.

Oil at same price as before OPEC cuts

A barrel of oil is now trading at roughly the same level that it was in September when OPEC surprised the market by announcing production cuts.

"We had a market that was fundamentally oversupplied. We were literally putting barrels into storage tanks every single day and we had $45 oil," said Jackie Forrest, director of research for the ARC Energy Research Institute.

"Now we have a market that is arguably balanced, we're not drawing down the inventory, but we haven't been gaining either and we have $45 oil."

At its heart, the problem is that oil traders are watching every blip in the market, looking for evidence that more oil is being produced, whether inside the U.S. or outside.

"We're starting to see Libya get its house back in order," said Rob Mark, a portfolio manager with Raymond James. "Nigeria to some degree as well, but with Libya, you can see swings of a couple of hundred thousand barrels a day."

Oilpatch can survive at $40, but not thrive

There's not much question that oil trading closer to $40 a barrel is unpleasant for the energy sector, but it is not quite as disastrous as it was three years ago. Years of suffering have made the energy sector more efficient.

Cenovus said last week that it can break even at $41 crude. Analysts estimate that Suncor's numbers are lower than that.

"Those kind of economics were not reality there three years ago, not even close," said Mark.

Surviving, though, is not growing and the oilpatch needs to grow in order to get people working again. Forrest said that by ARC's calculations sustained prices of $40 oil will hurt.

"We were assuming about $53 dollar WTI [West Texas Intermediate] this year that would generate $44 billion in free cash flow. Most of that goes to new drilling and capital expenditures," said Forrest. " At $44 [WTI], that really crimps that number, so you could see half the activity in the province going away if these prices are sustained."

The best hope for oil prices now is that the summer driving season will go as expected and there will be a significant draw down of inventories by early fall. That also depends on U.S. production coming in as expected and OPEC adhering to its cuts.

However, Forrest said OPEC members may be becoming frustrated with low prices, given that all of their cutting has not netted a substantially higher oil price.

"If prices stay down at this level, it probably does encourage some cheating. If OPEC starts to cheat and not comply with these cuts , it's going to be very hard to draw those storage levels down."