Office work could be changed forever by COVID-19. Here's why that matters

Only a fraction of employees who began working from home during the COVID-19 pandemic have returned to full-time office work, and that has ramifications for everything from how workplaces are run to where we live — and whether the small businesses that surround office buildings survive.

Only a fraction of employees who began working from home during the COVID-19 pandemic have returned to full-time office work, and that has ramifications for everything from how workplaces are run to where we live — and whether the small businesses that surround office buildings survive.

Nearly three-quarters of the 3.4 million Canadians who began working from home at the start of the crisis were still working remotely in August, according to Labour Force Survey data released by Statistics Canada on Friday.

And another survey suggests many of those new remote employees would like to continue working from home indefinitely.

"It seems remote work is here to stay, or at least the majority of us want it to be," said Heather Haslam, vice-president of marketing at ADP Canada, a human resources company.

That's in part because of fear of the virus itself, the survey found. Of the 12 per cent who said they were anxious about returning to their former work locations, 56 per cent said they were worried about contracting the novel coronavirus.

Another 13 per cent said they didn't know how they could meet their COVID-era family responsibilities while working outside of the home — things like caring for elderly family members or children whose schools could close if there's an outbreak, Haslam said.

A future of more flexible work?

The survey also found that young people were more likely to believe that the pendulum is swinging permanently in favour of flexible work. Forty-four per cent of respondents aged 18 to 34 said they believe their employers will implement more flexible policies within the next five years, including flextime and remote work; 28 per cent said they believe most people will work remotely by then.

The online survey of 1,538 Canadians working full and part time was completed between Aug. 10 and 20. The comparable margin of error for this study was +/-2.4 percentage points, 19 times out of 20. 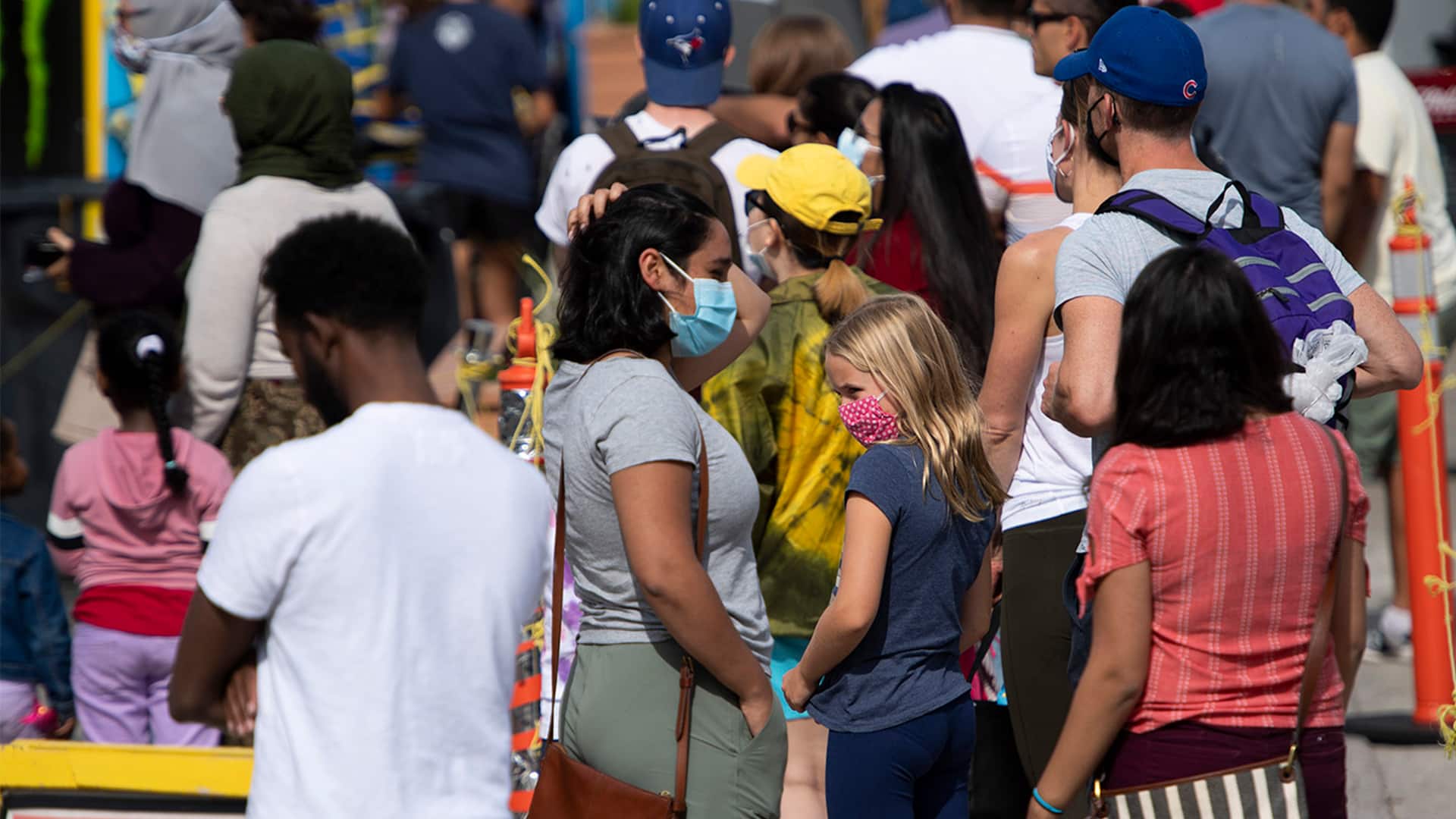 3 months agoVideo
3:21
Canadians are enjoying the last summer long weekend, but not all of them are abiding by COVID-19 safety protocols, especially young people. Experts predict a spike in cases following Labour Day gatherings. 3:21

Sandy Mangat is among the millennial workers who strongly favour flexible work — all the more so since being able to work from home during the COVID-19 pandemic.

"I actually started at my current company, Charli.ai, at the beginning of the pandemic. I was in our WeWork office for a day before we went totally remote," said Mangat, who's vice-president of growth for the Vancouver-based startup.

In the past, Mangat said, she's held jobs that involved time-consuming commutes.

"I've worked 100 per cent in the office before, which after a while wears on you because, at that time, I had a 45-minute commute into the office and an hour-and-a-half commute back."

Although her company has since acquired some permanent office space, it's allowing staff to continue to work from home, only coming in if they have compelling reasons to do so. But Mangat expects she'll keep her office days to a minimum.

"I'm pretty happy working from home, being able to squeeze in a workout, catch up with a friend or run an errand," she said.

"In general, I just feel like I'm taking better care of myself. I'm eating more consistent meals.... I feel like I'm focused more on my health and wellness because you have more control over that in your own space."

There are some tasks that would come together quickly if everyone she needed to collaborate with could be in the same room, Mangat said. "But for a lot of my day-to-day work, I am 10 times more productive if I am at home because I have a lot more control over the distractions.

"In the office, you don't always have control over that because someone wants to come over and talk to you, and it would be rude not to. So you lose maybe an hour of work a day because you're chitchatting."

"I used to get my hair blown out every so often. Upkeep on manicures and pedicures. Buying clothes for the office. Buying the expensive latte in the morning because you ran out of time at home. Lunches," she said.

"I've significantly reduced my spending on so many fronts because I'm spending more time at home, and I value different things because of it."

Her money is going to things like an ergonomic setup for her home, for instance.

That's great for individuals who are able to cut their spending while remaining gainfully employed but devastating to the businesses that are built up around workplaces — from the cobblers and dry cleaners in the lower levels of office buildings to the pubs where people eat lunch or gather for pints after work.

Larry Isaacs, president of the Firkin Group of Pubs, said the pandemic has been "disastrous" for the chain of 30 pubs, some owned by franchisees.

Many of its locations are in areas densely packed with office workers, and those customers are dearly missed, he said.

Warm weather is allowing for some patio revenue to trickle in, but with cooler fall and winter ahead, they'll be relying solely on inside dining and muddling through without work crowds.

"There's no Christmas parties, there's no cocktail parties, no lunch parties, so where is the revenue going to be driven from throughout the winter when all these people are working from home?"

By the looks of things, office numbers won't return to previous levels any time in the near future.

Emily Brine, interim chief talent officer of accounting firm KPMG Canada, said the company will be bringing a maximum of 20 per cent of its 8,000 workers back to their offices across the country in the coming months — less in places like Toronto, where 20 per cent would be above maximum group sizes allowed by public health.

"More broadly speaking, we've had far more appeal from our employee base to work from home than to go to the office," she said.

That's leading to conversations about how much office space the company will need going forward, and what kind.

"Do we have hoteling space versus broader collaboration space, more white boards, less office cubicle space?" Brine said. "Many organizations and certainly a lot of our clients are talking about this as well."

That fits with findings by the Canadian Chamber of Commerce as well.

"We asked our national working group on workforce strategies about this — to consult our members and different stakeholders on this — about returning to work and also about child care," said Trevin Stratton, chief economist and vice-president of policy for the business advocacy and service organization.

"Most, if they can, are continuing to work from home through the autumn and the coming months, as they make longer-term plans and also as they wait to see data on a second wave as well."

The quest for more space

But as the months of remote work wear on, some Canadians are concluding that if they don't need to work downtown, they may not want to live there, either.

"We were hunting [for] a two-bedroom condo in core downtown, so we could just walk to our office every day," said Jinesh Sheth. 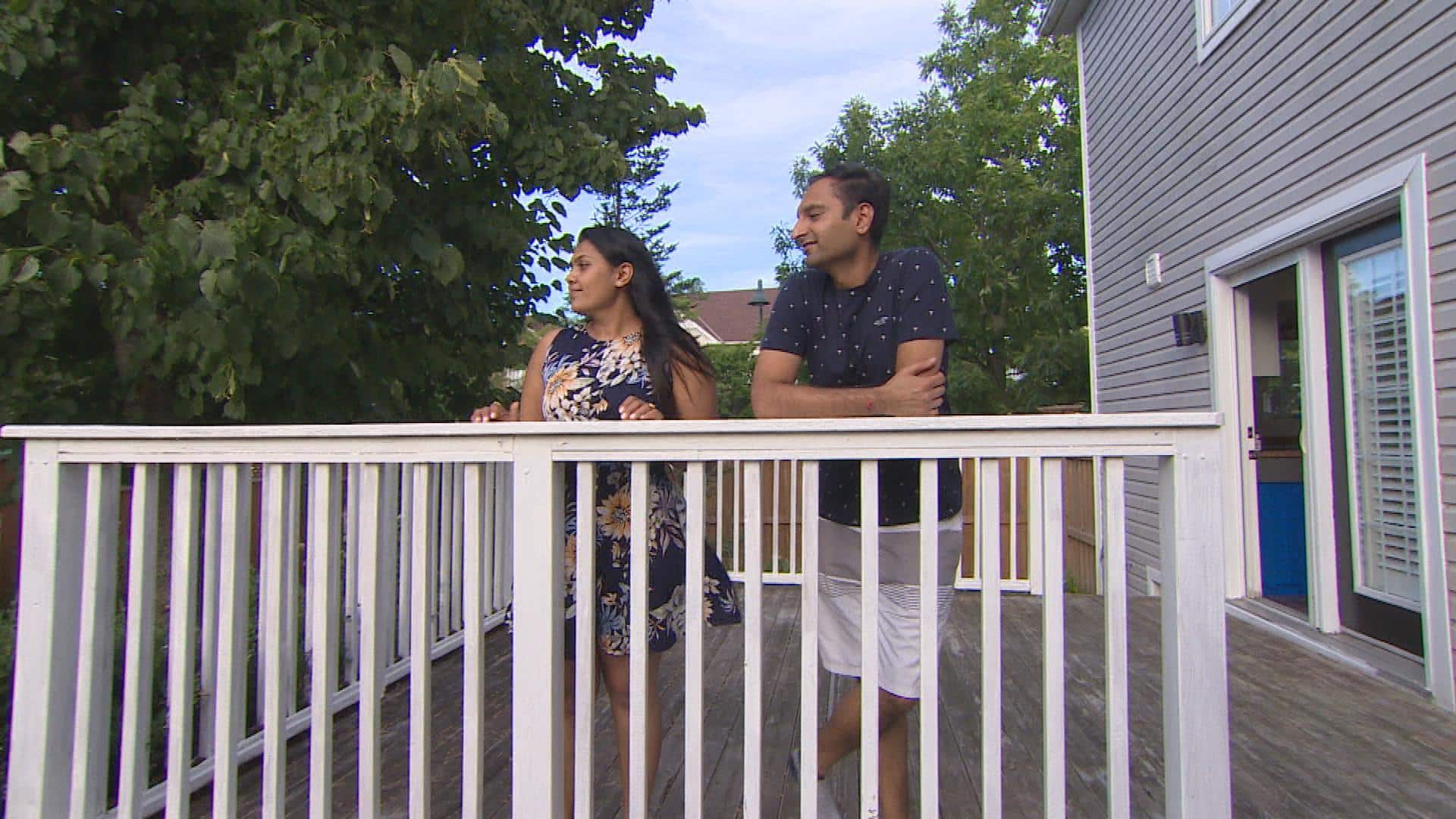 Working from home during pandemic causing shift in economy

3 months agoVideo
2:34
Experts say with more people working from home due to COVID-19 the demand for houses is up, and the need for commercial office space may decline. 2:34

But when the pandemic hit, he and his wife, Puja Shah, found themselves working in very tight quarters in their rental apartment, sometimes interrupting each other's video meetings.

The couple works in information technology for the finance industry, and both of their employers have indicated that at least part-time remote work will be allowed going forward. So they pivoted their purchasing plan and bought a four-bedroom house in suburban Ajax, Ont., for the same amount they would have spent on a condo downtown.

"We are very confident that it's going to be a much better life and we can take a walk in our backyard, and we don't have to run into each other so much during our meeting times," Sheth said.

Darren Fleming, CEO of commercial real estate company Real Strategy in Ottawa, said moves like theirs are bound to have profound effects on the "ecosystem" of businesses that surround office buildings.

WATCH | Are office spies and sterile spaces the future of work?: 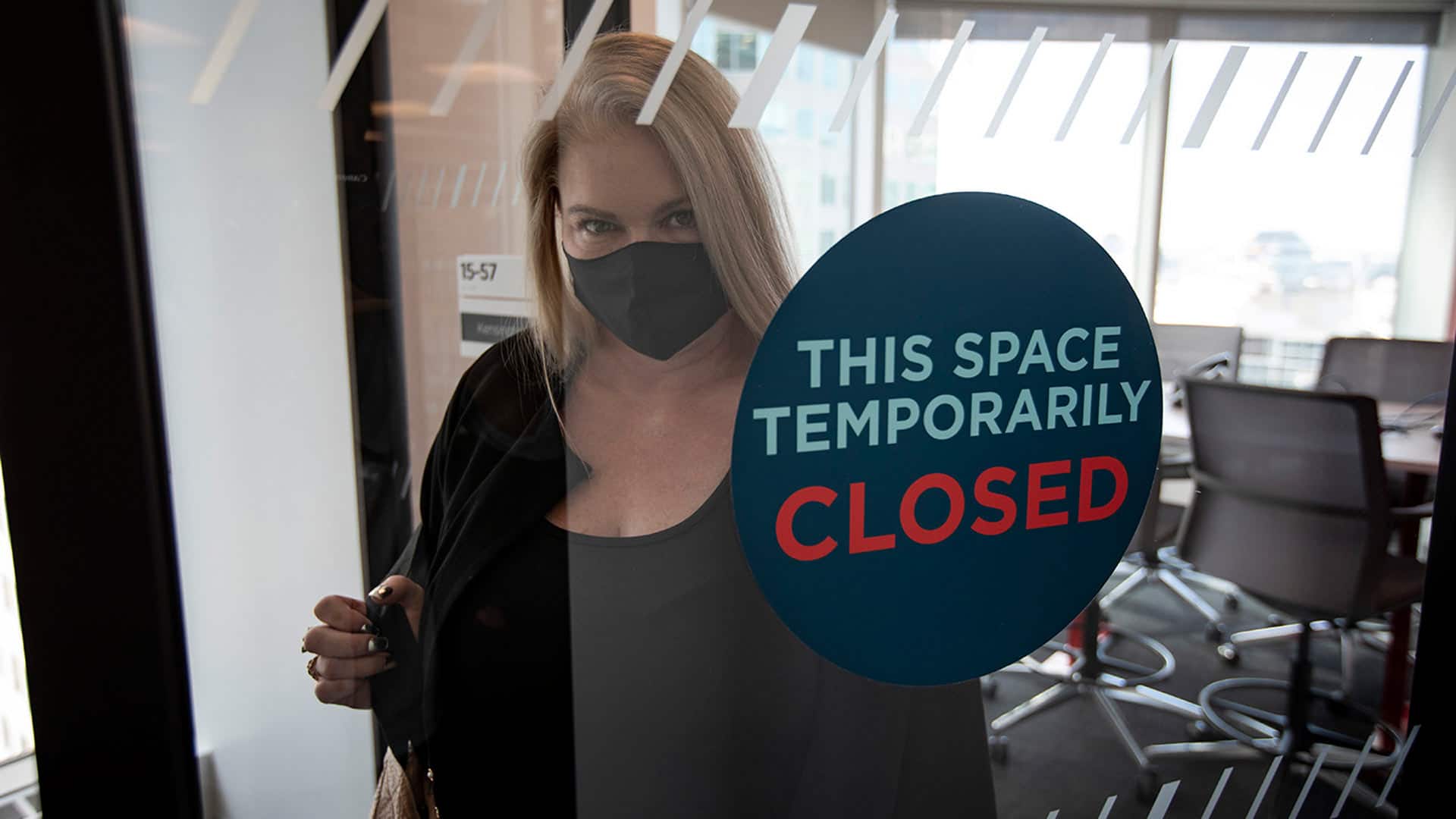 2 months agoVideo
1:59
The COVID-19 pandemic has changed what workplaces look like. The communal areas and cluttered desks are gone, replaced with stark, sterile spaces and the rules being enforced by office spies. Is this what the future of work will look like even after COVID-19? 1:59

"It means the barbershop that only did business with office tenants during 9 to 5, Monday to Friday, suddenly may not have anybody to cut hair with," he said.

"We're already seeing a shift to people moving to the suburbs and residential, because if they're going to be working from home ... maybe they're going to need a second bedroom. I think it's a little bit early to say. But fundamentally, I think there's been a change in the way we work. And it's going to be very interesting."

With files from Jacqueline Hansen