U.S. President Barack Obama tells Donald Trump "the presidency isn't a reality show." But Don Pittis says there is increasing evidence that complex issues of business and economics just don't matter once the "tribe has spoken."

Sorry Mr. President, you're wrong: Politics is more and more like reality TV every day

"This is not entertainment. This is not a reality show. This is a contest for the presidency of the United States," President Barack Obama said in response to media questions about presumptive Republican candidate Donald Trump.

Trump's show, The Apprentice, was ostensibly about business, but it wasn't really. Reality shows, like politics, are an illusion.

They both pretend to be about real life, but they oversimplify. They make people think they actually understand the complexities of economics and business.

The trouble is, of course, that no one really knows the answers to our hardest economic questions.

Our highly educated experts cannot be sure what will happen when they cut interest rates below zero. They really don't know whether flooding the world with cheap money will eventually come back and create unintended consequences.

Voters are even less equipped.

For all our celebration of democracy, the vast majority of voters don't understand bond markets or derivatives. As we saw in the U.S. property crash, many don't understand central banking or interest rates.

Many have a pre-18th century understanding of international trade. They imagine a world where countries profit from exporting as much as possible and importing as little as they can.

Politicians have known for years that you have to keep it simple.

For instance, some of us may realize that understanding quantum computing is essential to keeping North America's place in the world economic order. But even Prime Minister Justin Trudeau — celebrated for his public definition that made a splash on social media — knew a real explanation of quantum computing would have gone over our heads and his. 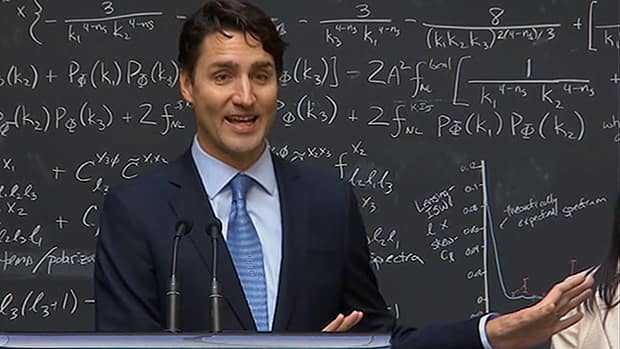 5 years agoVideo
1:28
Justin Trudeau responds to a flip question from reporter with a good-natured, not-so-flip answer 1:28

The problem with reality show-style simplification is that for the folks at home it depends on some sort of basic honesty and expertise from the people doing the simplifying. The audience really isn't qualified to catch the errors, whether intentional or honest mistakes.

The necessary oversimplification of the world by politicians may be related to a phenomenon known in the software industry as "bikeshedding" or Parkinson's Law of Triviality.

Essentially, it's an observation by British naval historian and author Cyril Northcote Parkinson, who found that in a committee charged with making decisions about a new nuclear plant, members were relatively silent until they got to the trivial issue of how to build the bike shed, when everyone had an opinion.

People are often ill-equipped to consider complicated matters and so focus on the trivial.

Grasping the details of how the economy works is difficult and is almost impossible to explain in a sound bite. But building a wall to keep out Mexicans, that's easy to say. Any fool can understand it.

Even if he were capable, Trump would quickly lose his populist audience if he began explaining the labour market, demographics, world money flows and trade in anything approaching their true complexity.

That wall idea may be one of Trump's pronouncements that Obama said "would potentially break the financial system."

Trump has also suggested tossing out Federal Reserve chair Janet Yellen once he takes power. Even worse, Trump hinted that if he's elected, the U.S. might renege on a portion of its debt. Sticking it to the man may play in Peoria, but currency and bond markets were deeply troubled by the comments.

Calling the North American Free Trade Agreement "one of the great economic disasters" at the same rally was also a good reality show comment. "Bring the jobs back" may be the reality TV slogan to get Trump elected, but many economists worry it could create a replay of the Great Depression of the 1930s.

All politicians, including Obama and Democratic front-runner Hillary Clinton oversimplify. There is just no other way to explain complex ideas briefly to a mass of voters.

Trump isn't alone in offering glib solutions to the complex problems facing the world, he's just very good at it. In the world of reality television politics, he's the one with the most experience.

It's fair to say it's not the job of politicians to understand all the details. We elect politicians to hire experts to run the complex bits of our economy.

In the past, it has been the job of experts and journalists and commentators to listen to those pronouncements, weigh them and help voters decide what is true.

But as The Donald tweets about his taco lunch and media organizations pass on his reality show comments verbatim, it may be that for a large majority of the U.S. population, the analysis stage has been left out and they think of reality show simplicity as truth.

And just as Trump's Republican challengers have been voted off the island one by one, it suddenly seems within the realm of possibility that the former host of The Apprentice will be able to use his reality show skills to become the sole survivor.