The federal minister responsible for telecommunications said Wednesday that the Liberal government is very aware that there's a tension between the needs of consumers and Canadian wireless carriers.

The federal minister responsible for telecommunications said Wednesday that the Liberal government is very aware that there's a tension between the needs of consumers and Canadian wireless carriers.

Innovation Minister Navdeep Bains told an industry conference that he's heard their warnings that future investments in communications networks could be threatened by policy changes.

But Bains also told the audience that he and other members of the Trudeau government hear frequently from the public that high-speed internet and wireless pricing is unaffordable for many people.

But they're upset that Canadian prices for wireless data are among the highest in the world.

We're trying to find that spot where we continue to see prices go down but not at the expense of investments.- Innovation Minister Navdeep Bains

The telecom service providers have countered that Canada's wireless prices aren't easily comparable with other parts of the world because of its large geography, much of it sparsely populated, and because current Canadian wireless networks are more advanced than in almost any other region, including the United States.

Bains acknowledged the billions of dollars spent by Canada's carriers on equipment and wireless spectrum, but said the Liberals want more consumer-friendly policies that bring down prices.

"We're trying to find that spot where we continue to see prices go down but not at the expense of investments. And I don't know where that is," Bains said.

He made the remarks shortly before his ministry revealed some of the rules for the federal government's 2020 wireless spectrum auction.

A department spokesperson said in a briefing that the revised plan would reclaim less of the 3,500 megahertz spectrum that's already licensed — mostly to Bell, Rogers and Xplornet — to minimize disruption to current fixed-wireless services to homes, businesses and communities.

The revised plan also wouldn't force current 3,500 MHz licensees to return them unless there was a successful bidder for them in the auction and until the bidder was prepared to put the spectrum to use, which could be years in the future.

The spokesperson also said that some details of the auction process won't be determined until after another round of consultations.

The spectrum licences will be an important building block for their fifth-generation wireless networks, which are expected to revolutionize communications and stimulate the Canadian economy over the next decade.

Because of the technical capabilities of the 3,500 MHz spectrum to be auctioned next year, it may be even more important to Canada's wireless companies than this year's 600 megahertz auction, which raised $3.47 billion for the federal government.

A large concern for national carriers is the potential for all current wireless network operators to be required to sell capacity, at regulated wholesale prices, to rivals that haven't invested in their own spectrum and facilities. 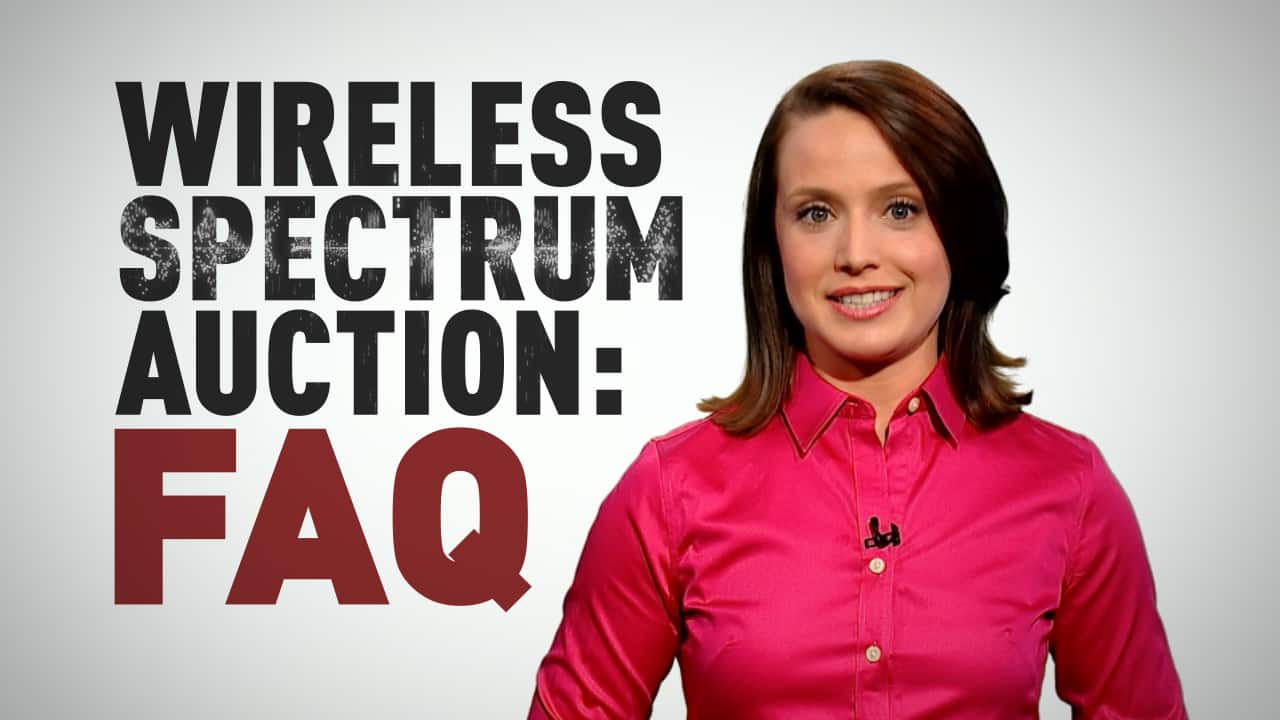 6 years agoVideo
1:28
Ever wonder what wireless spectrum is, and why the government auctions it off from time to time? Then check out this, our helpful explainer 1:28

The president of the Canadian Wireless Technology Association, former P.E.I. premier Robert Ghiz, said Tuesday that facilities-based carriers must be assured that they can reap the financial rewards of investing in wireless infrastructure.

Citing an Accenture report commissioned last year by the CWTA, Ghiz said that the initial rollout of 5G will cost $26 billion between 2020 and 2026.

"This does not include the cost of wireless spectrum," he said.

Ghiz warned that their confidence in the future could be eroded by a change in policy announced by Bains in February, as part of the government's attempts to reduce Canadian wireless pricing and improve affordability.

Regional providers could be 'hardest hit'

In March, the Canadian Radio-television and Telecommunications Commission (CRTC) said it would look more favourably on mobile virtual network operators, or MVNOs, that compete without building their own networks.

Ghiz said that all Canadian facilities-based providers will have less incentive to make investments if they are forced by regulatory policy to provide wholesale capacity to companies that haven't built networks or invested in spectrum.

"If we go down this road, Canada's regional providers — we believe — would be the hardest hit. The very companies that governments have been trying to encourage, and who have made important contributions to sustainable competition and lowering prices in Canada."

Other bidders in the 600 megahertz auction held in March included Bragg Communications, the private owner of Eastlink, TBayTel of Thunder Bay, Ont., the Saskatchewan government's SaskTel, and Xplornet Communications Inc.

Xplornet, a national carrier that primarily serves customers just outside urban centres and remote areas through a combination of wireless, satellite and fibre optics, said earlier this year it planned to spend $500 million over five years to provide 5G wireless and faster internet in rural parts of Canada.