Canada's gas industry is craving a new outlet to international markets. Without an export facility, the sector will shed jobs and production will decline.

Jobs on the line as sector faces uncertain future

The situation facing Canadian natural gas producers might be thought of in terms of a bakery that sells all its bread to the same customer every day. That's fine until the customer opens his own bakery next door, and the original baker knocks on the door and asks if they need any bread.

Failure is we don't get anything off our coast. Then we're in trouble.- Dave  Tulk , GPMI

Historically, the United States has been the main buyer of Canada's oil, natural gas, propane and other petroleum goods. In the last five years, this relationship, symbiotic for so long, has seen profound changes as commodity prices have fallen and U.S. production has undergone a dramatic reversal of fortune because of the emergence of prolific shale oil and gas plays.

At the same time, Canada is still trying to ram its oil and gas across the border. Like in the case of competing bakeries, however, the demand is only so big.

"[We're] very concerned about it. We are losing our market in the U.S. for our gas," said Dave Tulk of Calgary-based Gas Processing Management Inc. "The ability of our gas to compete with the gas coming out of the shale plays … it's a real concern."

'We, as Western Canada, need LNG'

Similar to the Canadian oil industry's desire for new export pipelines, the natural gas industry is also craving an outlet to international markets. Several Liquified Natural Gas (LNG) facilities are proposed for British Columbia's coast, but there is considerable uncertainty whether any of them will be built. If they aren't, there is little doubt Canada's natural gas industry will suffer, especially as the U.S. market dries up. 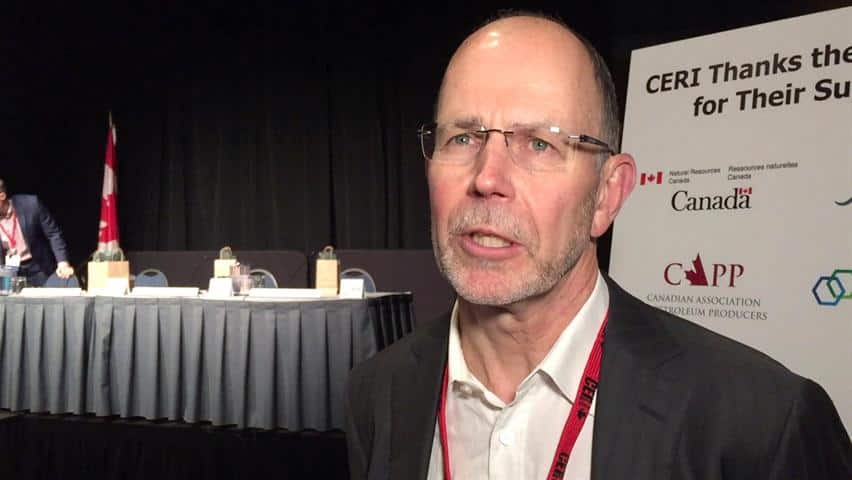 Companies want to export natural gas because world prices are much higher than in North America.

There are some domestic opportunities for natural gas producers opening up in Alberta. The province is beginning to shift away from coal-fired power plants, and natural gas electricity generation is expected to make up much of the shortfall. In addition, the provincial government is also offering $500 million to attract new petrochemical facilities.

However, these possibilities don't amount to much of a contingency in case LNG export facilities are not constructed. Without LNG, experts say, the Canadian natural gas sector will contract.

"Failure is we don't get anything off our coast. Then we're in trouble," said Tulk. "We absolutely need this option to stop the irreversible decline of our gas industry."

Work in gas fields drying up

The notion that the industry could collapse without LNG isn't new. Industry representatives have expressed a similar sentiment in the past, although the sense of urgency now is noteworthy. Natural gas prices are free falling, and there is little movement on the LNG front in B.C.

While gas producers would benefit from an LNG export facility, the economics for a company to build such a multi-billion-dollar plant aren't as rosy as they once were. Global prices are no longer as lucrative.

Two years ago, countries such as Japan and India were paying around $20 US per million British thermal units (MMBtu) of LNG, but in the last few months have only paid about $5 or $6. Weaknesses in Asian economies are largely blamed for the drop.

Gas producers in B.C and Alberta were only collecting roughly $2 US per MMBtu in recent months, and that's why they so badly want an LNG facility. However, the price differential might not be large enough for a company to justify constructing a massive export terminal.

Meanwhile, work is beginning to dry up in gas fields, and optimism is hard to find.

Besides natural gas, the market for natural gas liquids (NGLs), such as propane and butane, is also suffering because of the same market factors.

"The declining value of Canada's net NGL exports is partly the result of low NGL prices and increased competition from rising U.S. propane production, which has increased 40 per cent since 2011," said the National Energy Board in January.

Prices for natural gas and NGLs are not expected to increase for Canadian producers in the near future. There is surplus natural gas in the U.S. as that country begins to export its own gas through LNG facilities.

"We're seeing natural gas prices get pressured to lows that we haven't seen in 17 to 18 years," said Martin King, a commodities expert at FirstEnergy Capital in Calgary, in an interview with CBC News earlier this month. "It's a wake-up call for some portions of the industry."

Canada's largest natural gas producer, Encana, lost more than $600 million in the most recent quarter and said it would cut a further 20 per cent of its workforce.

While Canada's gas industry fully supports construction of LNG export plants on the west coast, there are concerns about the environmental impact of such facilities.

For instance, the proposed Pacific NorthWest LNG project could become the largest carbon polluter in Canada if upstream emissions are taken into consideration, according to the Pembina Institute, an environmental think tank.

In addition, the group estimates the proposed facility could account for 75 per cent to 87 per cent of the emissions allowed under B.C.'s 2050 target.