What Canadian business hopes to get from NAFTA talks

Canadian businesses are hoping U.S. negotiators will be receptive to maintaining, if not improving, the current cross-border flow of goods and workers as the North American Free Trade Agreement is renegotiated, starting today. 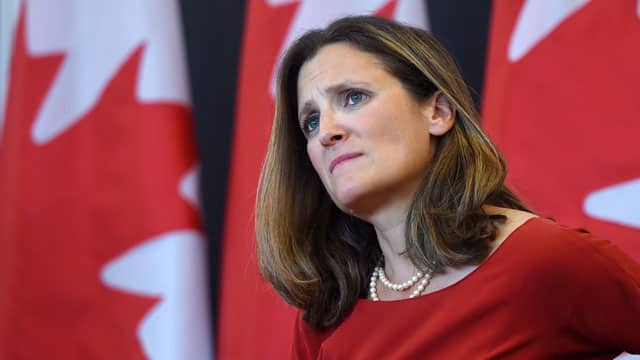 What business wants from NAFTA talks

3 years agoVideo
2:33
From dairy farmers to small manufacturers, there's a lot of worry about NAFTA negotiations. But some also see it as an opportunity to modernize some of the rules that can complicate simple tasks like having workers that move between countries 2:33

Canadian businesses are hoping U.S. negotiators will be receptive to maintaining, if not improving, the current flow of goods and workers across the border as the 23-year-old North American Free Trade Agreement is renegotiated.

Economist Trevor Tombe of the University of Calgary says ensuring the flow of skilled workers is a "pretty realistic prospect" in the NAFTA talks and is important to the economies of both the U.S. and Canada.

"We have a very deeply connected supply chain, and that means that employees flowing from one facility on one side of the border to another is very important to make sure that things run smoothly," he told CBC News.

Canada wants any new agreement to include easier cross-border movement of in-demand workers, such as those in the high-tech sector.

Tombe says there might be an opportunity to reach a deal on that front because of Trump's legislation to admit immigrants based on their skills and entrepreneurial initiative.

"We are not a low-wage country relative to the U.S., so there is very little fear that we would be undercutting the labour services that Americans would be providing," Tombe says.

Economist Jayson Myers, former CEO of Canadian Manufacturers and Exporters says the U.S. relies on a range of Canadian technology to support areas like infrastructure, and there is a risk the U.S. will want to change the rules of origin and content requirements, affecting tariffs and the bottom line.

Worries about price increases for customers

Joe Udzbinac is chief operating officer of Tessonics, a Windsor, Ont.,-based developer of ultrasonic testing equipment, useful for such things as determining the strength of steel. Some of its major customers, Detroit's automakers, are just on the other side of the border with the U.S.

He said the current trade agreement is working well for the company's finances and the worst case scenario is having to pay new duties on some of the components, forcing Tessonics to increase prices.

"Definitely we have some concerns about it, there's no question," he told CBC News.

Udzbinac said the majority of the current frustration in doing business with the U.S. comes from making service calls and coming up with all the documentation to prove his employees have work visas and have, in fact, sold the equipment in the U.S. within the timeframe of the warranty period.

"There's always some anxiety with that process, depending on which customs officer you're going to get and depending on what questions and documentation there are."

Udzbinac said exporting equipment to the U.S. is "cumbersome" and he would like to see fewer crossing requirements, ideally something along the lines of those in the European Union.

The dairy sector was excluded from the original NAFTA deal in 1994, but Canada's supply management system for dairy has long been a point of contention.

The U.S. may push Canada to allow greater access to its markets for American dairy products in the NAFTA talks. But David Wiens, a dairy farmer from Grunfeld, Man., and vice-president of the Dairy Farmers of Canada, believes there is a lot of inaccuracy in the perception of unfairness on Canada's part.

"The way in which supply management works, it's a domestic policy," he said, for producing milk for the Canadian marketplace

However, the U.S. dairy industry is not happy that Canadian producers get to profit from price controls, and then can sell skimmed-off diafiltered (higher protein) components for cheese-making at lower market prices, squeezing Americans out of a growing market.

Wiens is hoping dairy will remain out of NAFTA and that U.S. producers turn their focus on their domestic policies to control their problems with overproduction.

The Canadian Federation of Independent Business says there is "real concern" among its members that any changes to NAFTA could have significant effects on their ability to sell goods and services abroad. The CFIB says uncertainty in how the trading partners will have to do business makes it difficult for Canada's small business owners to plan for the future.

The CFIB conducted a survey of its members recently and asked whether "the potential renegotiation of NAFTA" would alter or change their export-import plans in any way.

Twenty-eight per cent of those who trade with the U.S. and/or Mexico said yes.

Members were also asked, "What influences your decision to increase the amount that your business exports to countries outside of Canada?" Thirty-six per cent said they were motivated by "favourable free trade agreements."

The findings illustrate that small business owners may already be looking to other markets for their imports or exports to deal with the ongoing uncertainty with NAFTA, the CFIB said.

In releasing its response to the start of the talks, the CFIB quoted a farming business owner in B.C. as saying, "We're hoping that NAFTA remains relatively the same."

The survey of 4,399 CFIB members was conducted online between May 15 and June 26. Results are considered accurate within plus or minus 1.48 percentage points, 19 times out of 20.

The first round of negotiations in Washington for a new three-way pact between Canada, the U.S, and Mexico is scheduled to continue from Wednesday until Sunday.

The Trump administration formally notified the U.S. Congress in May that it intended to initiate the talks.