Grocery chain Metro is in exclusive discussions to take over pharmacy chain Jean Coutu, a corporate marriage that seemed destined to some experts years ago but the timing never quite worked until now.

Deal would link two of the most dominant brands in Quebec

Grocery chain Metro is in exclusive discussions to take over pharmacy chain Jean Coutu, a corporate marriage that seemed destined to some experts years ago but the timing never quite worked until now.

On Wednesday, the Quebec-based chain said it was proposing to buy Jean Coutu for $24.50 a share in a deal that would add Jean Coutu's more than 400 stores in Quebec, Ontario and New Brunswick to Metro's stable of 600 food stores in Quebec and Ontario, and 250 pharmacies.

While some have argued the price is steep, most experts agree the two businesses are very complementary. Indeed, they have likely been eyeing each other for several years, says Sylvain Charlebois, the dean of the faculty of management at Dalhousie University in Halifax.

"This particular deal was inevitable in my mind," he said in an interview with CBC News. 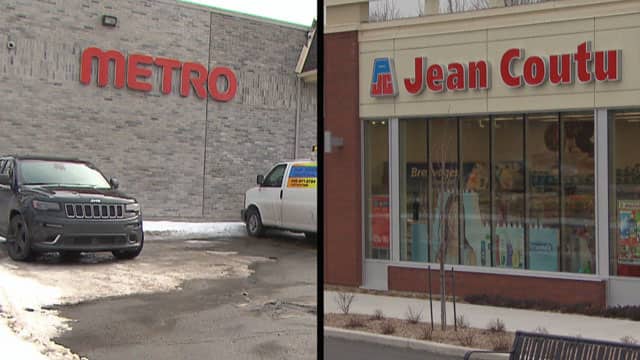 3 years agoVideo
5:47
Is a merger between Metro and Jean Coutu necessary for them to both remain competitive? 5:47

As far back as 2013, Charlebois says, Metro was mulling an acquisition of the Safeway grocery chain, before rival Sobeys swooped in and bought the chain for $5.8 billion.

A few months later, Loblaw made an even bigger splash, buying Shoppers Drug Mart for $12 billion. A round of consolidation was underway — but Metro found itself without a dance partner.

"That got Metro thinking about the beyond-food space," Charlebois said. "Basically to growing [beyond] the Quebec market it had to acquire something — or get acquired."

He says the deal is good for both sides because they both understand the Quebec market and thrive in it. Moving further into drugstores is a wise move for Metro, Charlebois says, because it diversifies the chain away from razor-thin profit margins in the grocery business.

Quebec's population is aging, and "older consumers need medication," he said. "That's a nice portal into a really lucrative market for Metro."

And Jean Coutu is no ordinary drugstore chain. Unlike some others, which largely just resell products, Jean Coutu actually manufactures generic drugs, which allows it to keep more of the profits.

The chain is also a real estate behemoth. It owns 184 buildings across the province, Desjardins analyst Keith Howlett says, and since most of the locations are owned by franchisees, the chain derives most of its profits from charging rent, service fees and royalties.

"There is room to sell real estate assets to drive higher returns."

Howlett says Metro hasn't bought back any of its own stock in the most recent quarter, a sign the chain has been hoarding its cash in anticipation of a major deal like this one.

This isn't the first time suitors have come calling for Jean Coutu, but previous advances were rebuffed by the chain's eponymous founder, the 90-year-old patriarch of the chain whose family still controls the company with a majority of voting shares.

But Coutu himself supports this deal, which is key to its likely success.

"Although Metro's interest in Jean Coutu was no secret," TD analysts Michael Van Aelst and Evan Frantzeskos said in a note, "we are surprised that the Coutu family is finally ready to sell."

One likely incentive to sell now was the Quebec government's decision earlier this summer to spend $300 million less on generic drugs this year, a move that will be a direct hit to Jean Coutu's bottom line as the company controls about a third of Quebec's drug market.

It's also possible that both companies are choosing to finally link up because they see even bigger threats on the horizon. The grocery business is always a tough one, but online retailer Amazon's move to buy high-end chain Whole Foods changed the landscape.

The new company is already cutting prices, and Amazon is managing to cut costs by bringing its online expertise to Whole Foods' network of 431 stores, including more than a dozen in Canada.

The deal-making appeal for the companies may be obvious, but there's also an upside for both chains' customers, Quebec Finance Minister Carlos Leitao says.

"For consumers, it's good news because they'll be able to get products at a lower price," he said on his way into a cabinet meeting Wednesday.

Whatever the motives, if the deal goes through it represents yet another major change in Canada's always evolving grocery business. "We believe that a Metro/Jean Coutu combination makes strategic sense," TD said, "just as the Loblaw/Shoppers combination did."