An American investment firm trying to take over Mountain Equipment Co-op (MEC) plans to hire a Canadian executive from a U.S. company that makes specialty footwear for the military and police to help run the business.

Members of Mountain Equipment Co-op (MEC) fighting its takeover by an American investment firm say the hiring of an executive from a U.S. company that makes footwear for the military and police clashes with the company's values.

Jay Taylor, who is currently listed as the CEO of LALO Tactical on its web page, is in line to be MEC's president and chief operating officer if the sale goes through to Kingswood Capital Management, the Los Angeles-based firm confirmed to CBC News in an email.

Taylor's hiring was first reported by The Logic columnist Aleksandra Sagan on Saturday.

So far, 2,400 MEC supporters have raised more than $100,000 for a legal fund to fight the takeover, but the deal could be approved as soon as Monday at a court hearing in Vancouver.

Word of the potential hire was buzzing on social media over the weekend, infuriating members of Save MEC, a group trying to stop the sale of the Vancouver-based retailer and organize a counter-offer.

"It's shocking to me," said Jackie Pierre, an MEC customer from Vancouver for 10 years and a Save MEC member. "This is so far from what [MEC] is known for originally."

But Kingswood told CBC News Taylor is a Canadian citizen and a "longtime Vancouver resident and MEC member."

MEC's values include democratic collaboration, social and environmental accountability, stewardship and more recently, diversity and inclusion. Those who want to stop the sale of MEC — the largest co-operative in Canada — are concerned that bringing in a leader from a company with military links is a bad match for the brand and could endanger the company's culture.

LALO Tactical, based in San Diego, was set up in 2009 "to serve the needs of Special Operations Forces." It makes specialized boots with names such as Intruder, sold in colours such as Black Ops and Ranger Green.

Though it also makes athletic shoes, LALO's Instagram marketing leans heavily toward the military and police.

In an open letter last week, Kingswood assured MEC customers that the brand's values would be protected.

But Pierre and other Save MEC members, including Kevin Harding, say the potential hiring of Taylor sends a different message.

"If this is how Kingswood plans to honour MEC's values, I'm deeply disappointed," Harding, of Vancouver, said.

An old social media post by Taylor is also being cited as proof of the mismatch.

Save MEC members aren't the only ones concerned that the company's values are in jeopardy. An advertising expert is warning Kingswood that it could be doing damage to the iconic company it wants to buy.

A culture clash seen through the lens of social media

Kingswood confirmed to CBC on Saturday that Taylor attended meetings in Vancouver last week as part of "introductory discussions" with "key suppliers and incoming MEC leadership."

Taylor's history with LALO is alarming to some MEC members.

The company, which counts a former U.S. soldier among its founders, says LALO is an acronym for "Light Assault Lo-Vis Operator, a nimble, quick, tactical Special Forces Operator."

Many company Instagram posts show its boots being worn by heavily armed men in combat-like settings or by men in police uniforms with guns drawn.

Captions in some posts include: "I have a very strict gun control policy; if there's a gun around, I want to be in control of it," and "Locked, cocked, and ready to rock."

Another featuring police officers says, "Blessed are the peacemakers for they shall be called the children of God."

One member described LALO's Instagram feed as "particularly jarring for those familiar with MEC's ethos."

Another, who claimed to be part of the hunting and gun community, called Taylor an expletive and said the executive and LALO were "totally the wrong fit."

But Kingswood said in an email to CBC that Taylor is an "accomplished executive in the outdoor industry."

In addition to his expertise in "product innovation, development and manufacturing, as well as sales and marketing," the statement noted his past experience as an owner of ski shops in British Columbia.

Taylor's LinkedIn profile also describes his leadership role at the running shoe company Hoka One One over nearly three years.

It says he was responsible for launching Hoka in North America and the Asia Pacific region before negotiating the sale of the brand to another company.

Taylor did not respond to a request from CBC for comment or an interview.

Aside from criticism of his association with LALO, there was also a strong reaction on social media to a 2016 post on Taylor's own little-used Instagram account.

In it, Taylor responds to the killing of a group of police officers known as the "Dallas 5." The shooter was an army veteran who said he wanted to kill white officers to demonstrate his anger over police shootings of Black men.

Taylor's message suggests people should buy a T-shirt to support the families of the officers who died.

While it mentions a more inclusive hashtag, #oneteamonefight, it does not mention #blacklivesmatter.

At the time, the Black Lives Matter movement was already three years old, and police shootings of Black people were a growing part of public discourse.

For Jackie Pierre, it's an upsetting picture.

"You know, this guy to me resonates guns, All Lives Matter, Blue Lives Matter," she said. "Whoever's making these decisions is obviously not in solidarity with people of colour."

Pierre said if the Kingswood offer goes through and Taylor is hired, not only will she stop shopping at MEC, but she'll quit banking with RBC, which is one of MEC's leading creditors.

MEC lost $11 million in its last fiscal year of operation. COVID-19 has further weakened the company this year, and its management agreed to the sale.

The Save MEC movement is pressuring the company's creditors, especially RBC, to extend loans to MEC long enough for the group to present a counter-offer.

WATCH | Why MEC might perish, regardless of sale to U.S. investment firm: 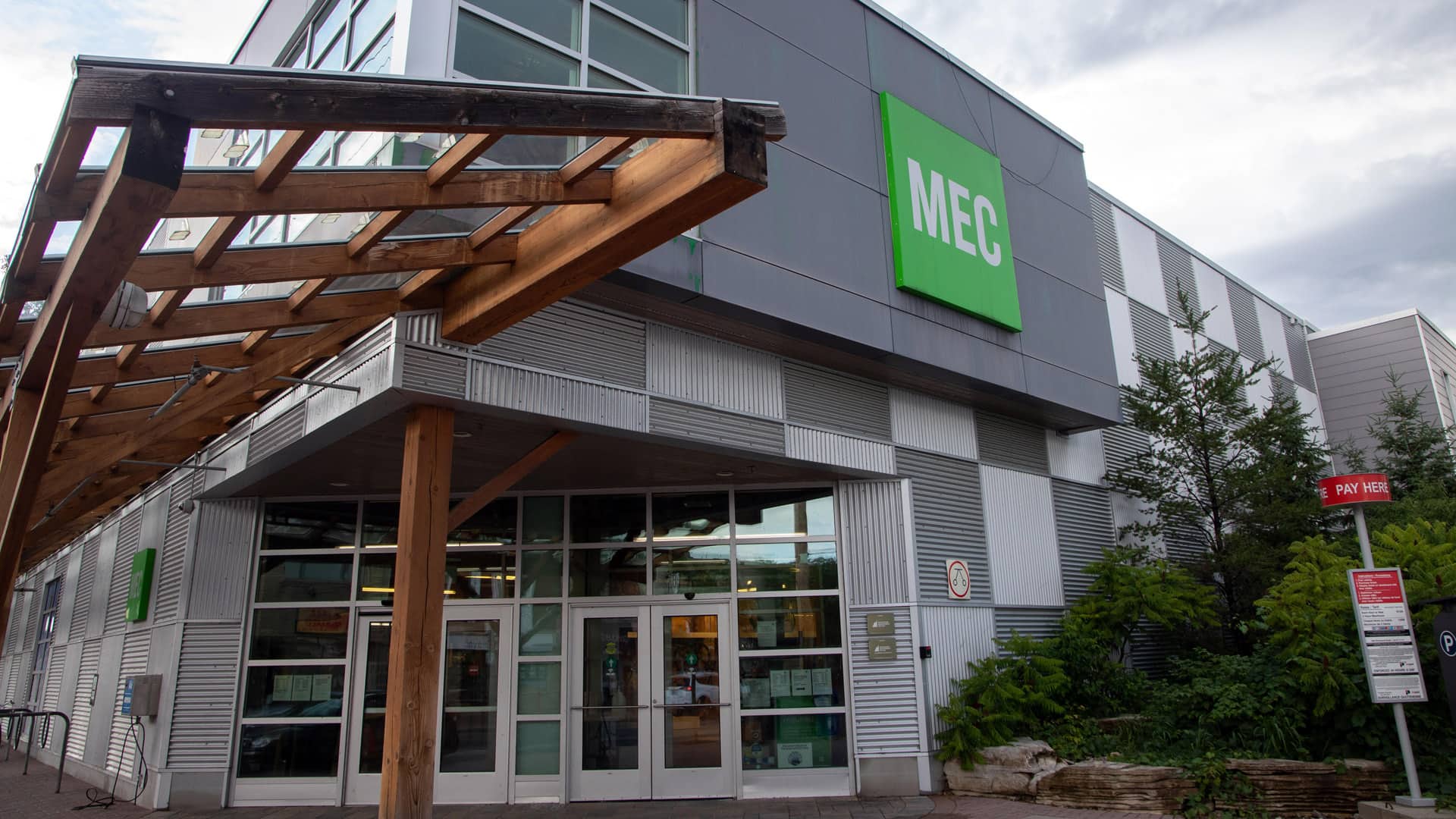 Why MEC might perish regardless of sale to U.S. investment firm

1 month ago
5:26
Members of Canada's largest consumer co-operative say the deal goes against its businesses principles. 5:26

The group's hope is that drawing attention to the legacy values of the brand and the direction the company could be taken in under new owners will encourage RBC to include public perception as part of its evaluation.

Almost 50 years old, MEC has 5.4 million members and 22 stores in Canada. More than 135,000 people have signed an online petition to stop its privatization.

In response to the concerns of Pierre and other Save MEC members, Kingswood said in its email to CBC that it has a "deep appreciation for what MEC stands for" and will operate within MEC values.

Toronto-based advertising executive Denise Cole has worked with iconic Canadian companies such as Roots and Lululemon, as well as the international mega brand Coca-Cola.

Co-founder of the ad agency Juliet Creative, she said she believes Kingswood should be worried about the reaction to its bid for MEC.

"A brand is certainly only as valuable as people's belief in it, in what it stands for," Cole said.

MEC is built on a "foundation of community," she said, and upsetting that community could do major damage to sales and what the company is worth in the future.

Cole said she thinks MEC's most loyal customers would accept an American owner so long as they felt the owner was listening to them.