Marriott Hotels is removing desks from each and every one of its 500 properties in more than 50 countries after "cross-generational" research found more people are using tablets and smartphones. But some business travellers who don't want to perch their laptops on their actual laps say the change overlooks their needs.

'I kept looking around trying to figure out where is the desk, where does one work?' 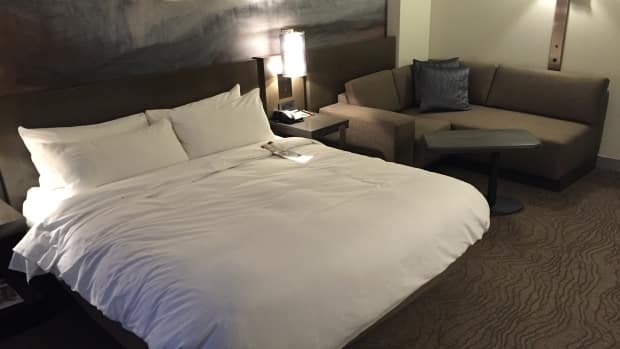 No desk for you!

5 years ago
1:51
Marriott Hotels is getting some heat for ditching in-room desk after 'cross-generational' research found more people are using tablets and smartphones 1:51

An international hotel brand is ditching desks in its rooms in an effort to keep up with changing times, sparking an angry backlash from some business travellers, who say the habits of millennials are behind the transformation.

The decision to remove desks is happening at just one of Marriott International's 19 brands, but Marriott Hotels is the company's flagship brand, with more than 500 properties in 50 countries.

Each and every room in those hotels is being redesigned, and at least one of their Canadian properties has already started pulling the desks.

Technology consultant Pat Molloy, who travels for business about 100 days per year, says she thinks the change is "a hideous idea."

Molloy, a baby boomer who lives in Marco Island, Fla., says she was in Calgary in December doing a workshop for a sales team at Telus. When she walked into her room at the Calgary Marriott Downtown, she received a shock.

"That's the first thing I do, is I put my laptop on the desk and I log in.  And there was no desk," she says.

"I kept looking around trying to figure out where is the desk, where does one work?"

She says there was an empty space next to the media console for the television where the desk used to be.

The only possible work surface was a small, rectangular table next to the couch in a sort of lounge area in front of the window, Molloy says.

"It was kind of cocktail-sized. That's the only place that you could sit down and work."

"It was uncomfortable so I eventually went to the concierge lounge and worked down there," she says.

Mike Hamilton from Carlisle, Ont., who stayed in the same Calgary Marriott Downtown last August, echoed Molloy's concerns in a review on the travel site TripAdvisor.

"There is just a little adjustable table (akin to a hospital patient's meal table) but I had to sit on the couch or my bed to use my laptop. I called down to the front desk and ask to have my room changed to one with a desk, and I was informed that none (NOT ONE!) of the rooms have desks." he wrote.

"Because most of my travel is for business," Hamilton added, "I will not likely stay here again."

Other business travellers are venting their anger on blogs and social media and travel forums.

One thread on the popular FlyerTalk.com started with a post titled "The Idiots who Design Marriott Rooms"

The writer, who says he stayed at the San Francisco Airport Marriott, writes: "What idiots! I'm in my 50s … I don't work on my computer cross-legged in the bed."

"Wake up people, not everyone stays at a hotel, especially an airport property, with no intention to work.  Why don't you talk to your real customers and not some Gen Y twerp?"

That thread had 337 posts, many expressing a similar sentiment.

Yahoo Sports national columnist Dan Wetzel, who was staying at the Marriott in Charlotte, N.C., also sounded off online in blog post titled "Who Stole the Desk from My Hotel Room?"

He said his room in Charlotte had a little table — without a matching chair. It was the wrong height for the couch, too.

"It's not like I was mining for coal here, but what we had was a room purportedly for people who travel for work with no place to actually work."

Wetzel called the front desk, and said he was told the change was related to the habits of millennials, "who don't use desks. [Insert "Millennials don't do any work" jokes here.] They prefer rooms that are designed to "hang out" in and whatever work they do can be accomplished on their phone. Hence we have two beds and a couch but no chair or desk."

Wetzel wrote on his blog that he thinks the hotel chain's thinking is flawed, and that millennials will understand his dismay.

"I think they want higher-grade wifi, better coffee and a smart television. I doubt they really want to hang out in their room so much there can't be a desk," he wrote.

Wetzel didn't respond to a request for comment. But his Wikipedia page says he graduated from the University of Massachusetts Amherst in 1994, which puts him squarely in Generation X territory.

Marriott takes issue with the idea that millennials are driving this change, which is expected to unfold over several years.

Herrera-Davila says the changes were made after extensive "cross-generational" research. She says the Marriott Hotels brand is trying to "re-imagine their rooms — they're doing things to the bathrooms, they're doing other things — and the work surface was one of the things that was looked at."

"We have customers and guests and focus groups walking through and using the space, the target customer for that brand. So it's never going to please everyone."

She acknowledges there have been complaints but says overall, the hotel has seen a "great response" to the changes — from all generations.