'How can they get away with that?': Canadians pay much more than Americans for baby products

Marketplace does a cross-border price comparison that could have Canadian parents throwing a fit.

With just weeks to go before she's set to deliver twins, Toronto's Kelsi Hamilton and her husband are busy buying double of everything. Diapers, baby food, cribs, a double stroller — the long list of essentials adds up to big, budget-busting bucks.

But what Hamilton didn't realize — at least until she saw the results of Marketplace's new cross-border price comparison — is that Canadians often pay way more than Americans for the same baby products sold by the same retailers, both online and in stores.

Even after accounting for the exchange rate ($1.29 on Nov. 1), Canadians are charged almost twice as much for certain brands.

And experts say the reason for the high prices in Canada could be as simple as this: Retailers charge Canadians so much because they've shown they'll pay it.

"It's not fair to us. It's the same products. How can they get away with that?" Hamilton says. "It seems like children's and baby stuff is kind of just rogue and they can do whatever they want and raise prices as much as they want." 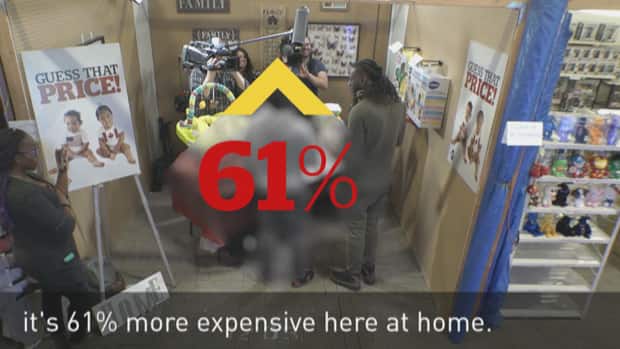 Canadian shoppers shocked to see how much less Americans pay

3 years ago
0:54
Marketplace did some cross-border price comparing for baby products and asked Canadian shoppers to try to guess the prices. 0:54

Marketplace did a random price check of 21 baby products available online and in stores on both sides of the border. The U.S. price of each product was converted to Canadian dollars and then compared with the price of the same product sold in Canada. Seventeen of the products (81 per cent) were more expensive in Canada; only four were cheaper north of the border.

The largest price discrepancy of all the baby products was for the Aquadoodle drawing mat for sale on Amazon.

There was also a big cross-border price gap for Huggies baby wipes at the online retailer.

It was a similar story at traditional brick and mortar stores.

The Marketplace team went shopping at a Walmart and Toys "R" Us just outside Toronto at the beginning of November and then went shopping again at both retailers the next day at locations near Buffalo, N.Y.

The biggest price difference at Walmart was for the Evenflo Exersaucer. The only model available in Canada was the Bouncing Barnyard Saucer, which cost $89.97. But the Sweet Tea Saucer, which is very similar, cost Americans just $63.70.

Some food prices were also cheaper at the Walmart in the U.S.

The same goes for games and activities sold at Toys "R" Us.

Marketplace's findings even surprised Ambarish Chandra, assistant professor of economic analysis and policy at the University of Toronto.

He says those kinds of price gaps were typical in a variety of retail sectors when the loonie was much stronger a few years ago. Now that it's weakened, he says the gaps should get smaller.

But that's not what's happened with baby products.

"You seem to have identified the sector where that's actually not true," he says.

It's particularly interesting, he says, because new parents might be the most price-sensitive consumers out there since they have an expensive new family member to feed, clothe and entertain.

He says many families with young kids don't have time to spend hours shopping around at other stores for the best deal or to drive to the U.S. for a diaper run.

"And so maybe that's something firms are aware of, and taking advantage of."

And part of the reason they're able to do that, he suggests, is because Canada is simply a smaller market than the U.S., with higher business costs and less competition.

"From the point of view of consumers, it's not justifiable … but a lot of it is just down to the economics of the situation," he says. "When firms don't operate at the same scale, and when they don't face much competition, they're going to price as high as they can get away with."

Marketplace asked Walmart, Toys "R" Us and Amazon to explain these price gaps.

All three provided statements with a similar message: They work hard to provide the best deals for their Canadian customers, but prices may be higher because of factors such as taxes and import fees, transportation and distribution costs, and local competitive pricing.

So what can Canadian consumers do about it?

One option, Chandra says, is to do more comparison shopping locally. Another is for those who live relatively close to the border — and have the time and energy — to put pressure on retailers in Canada by shopping in the U.S.

He says retailers on this side of the border might be inclined to lower their prices over time if they think they're losing a big chunk of business.

Kelsi Hamilton says she's found another way to stock up on baby stuff without breaking the bank. She checks out online buy and sell groups, Facebook Marketplace and local mom groups.

In fact, she just bought a stroller travel system for twins that includes infant car seats and a double stroller through Kijiji.

Asha Tomlinson is an investigative reporter with CBC Marketplace.