Should you have to dress sexy to keep your job? Many women working at some of Canada’s popular restaurant chains say they do, which some experts argue is discriminatory. 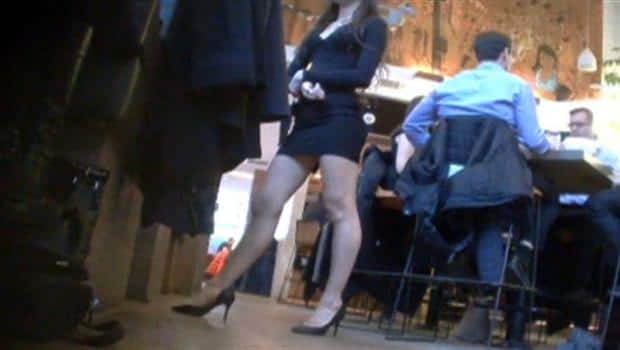 5 years ago
22:26
Sexy dress codes for servers at family restaurants. Are they sexist? And is slower really safer on the highway? We put speed limits to the test 22:26

Should you have to dress sexy to keep your job? Many women working at some of Canada's popular restaurant chains say they do.

But dress codes for female staff at some restaurants — which can include high heels, tight skirts and heavy makeup — may violate women's human rights, according to some experts.

CBC Marketplace investigated the dress codes at some of Canada's top restaurant chains and heard from dozens of female staff who say they felt pressured to wear revealing outfits or risk losing shifts.

"The dress is so tight that you can see your underwear through it," says a current employee of Joey Restaurants who asked to remain anonymous for fear of losing her job.

She claims she was told not to wear underwear at all in order to avoid this. (The restaurant says they were "genuinely upset" to learn of this comment to staff.)

'Not fair to women'

Women in the restaurant industry are increasingly speaking out about dress codes they say are sexist, interfere with their ability to do their job and leave them vulnerable to sexual harassment.

In 2015, a University of Alberta class project aimed at documenting sexism in the restaurant industry attracted hundreds of responses from employees and customers — many about dress codes and the unnecessary sexualization of female staff.

"I was often told that I needed to show more skin. I was 17 years old. No 17-year-old should be getting in trouble for not showing enough skin," one woman wrote.

The project — called the Feminist Eatery Database Undercover Project, or FEDUP — was designed to rank restaurants based on how its employees were treated.

Marketplace spoke with dozens of female staff of restaurant chains, past and present, who spoke out against the dress codes.

Caitlin Ferry, who worked at a Moxie's restaurant until January 2014, told Marketplace she frequently got "unwanted attention that kind of comes with the outfits we were wearing."

Allison Ferry, Caitlin's sister, who worked at Earls for four years, says she was told to wear a skirt no longer than where her fingertips fell when at her sides, about six inches above her knee.

Allison believes wearing high heels for long, demanding shifts is one of the reasons she now has painful hip, foot and back problems. "I have one foot that has a bone that's permanently out of place," she says.

"I didn't learn of these uniform requirements until midway through my training," says Jen Hatchard, who worked at a Jack Astor's in the summer of 2014.

She quit after being sent home for not wearing enough jewelry on shift. "I just thought it was ridiculous and not fair to women," she says.

'It is sex discrimination'

According to Restaurants Canada, 22 per cent of Canadians say their first job was in the restaurant industry.

If you don't like a particular restaurant's dress code, it's not as simple as just getting another job, University of Ottawa law professor Joanne St. Lewis says.

"That is not the economic reality in Canada these days. People have to take the jobs that are available," she says.

St. Lewis calls some of the dress codes uncovered by Marketplace discriminatory.

"It is sex discrimination. I have no doubt about it," she says. "The male employees are doing exactly the same task as the female employees … And they do not need to sexualize their clothing. That's the bottom line."

Some women are using the law to fight back.

In 2001, Andrea Mottu refused to wear a bikini top to serve drinks during a Hawaiian-themed event at the Vancouver restaurant where she worked. She took her complaint to the BC Human Rights Tribunal, which awarded her almost $6,000, saying the requirement was "discriminatory."

Employers cannot discriminate against individuals based on their sex, according to Canada's human rights codes. The Ontario Human Rights Commission, for example, says companies should not make employees dress in a sexualized or gender-specific way.

On its website, Restaurants Canada recommends that restaurants be upfront about their dress-code policies in the interview process and "ensure that male and female staff uniforms are equivalent or similar in terms of style and design."

Moxie's, Jack Astor's, Earls, Joey Restaurants and Restaurants Canada all declined to speak with Marketplace on camera about dress codes. But the restaurants say their dress codes are meant to look classy, not sexy, and add to the customer experience and that they treat all staff with respect.

On Facebook, Jack Astor's contacted Jen Hatchard about her experience and wanted to find out more about what happened and how to improve.

In a statement, Moxie's says it frequently updates its dress codes "based on team member and guest feedback."

When asked whether female staff are asked not to wear underwear, Joey Restaurants called that comment "unacceptable" and not something they would condone.

Earls wrote, in an email, that Allison Ferry's statement about skirt lengths is not correct. "Instead of saying 1 inch, which staff somehow manage to not be able to measure, [skirts should be] no shorter than a fingertip length above the knee."

Outrage over dress codes is just the tip of the iceberg when it comes to sexism in the restaurant industry.

Toronto pastry chef Kate Burnham grabbed headlines in 2015 when she spoke out about her alleged sexual harassment while working in the kitchen of a popular downtown restaurant, Weslodge.

Burnham's case nabbed the attention of Toronto-based restaurant owner Jen Agg, who took to Twitter to say sexism and sexual harassment are major issues in the industry.

It also provoked Agg to organize a conference on the topic called "Kitchen Bitches: Smashing the Patriarchy One Plate at a Time." The event, which brought both men and women together to discuss the abuse happening in restaurants, sold out.

Agg says what happens in kitchens is shocking.

"Slapping with tongs, snapping bras, relentless grabbing — women chefs learn quickly to crouch, never bend over, when picking up a pot," she wrote in an op-ed in the New York Times.

St. Lewis suggests sexualized dress codes can send a signal that tolerating harassment is part of the job.

"That is not something that I think any employer has the entitlement to ask in 2016 of any woman in a Canadian workplace," she says.