Ryan Sills was quoted $202 for the rental car he booked online when he was travelling from Toronto to Washington, D.C. But when he returned the car, he was dinged for $435 — more than double.

Sills, 33, was one of many viewers who complained about confusion, frustration and misinformation they say they faced dealing with car rental agencies, so Marketplace set out to answer one question for consumers: how to avoid getting ripped off when booking a rental car.

To test the consumer experience, Marketplace focused on one Ontario location that had the most egregious complaints — the Economy Rent-a-Car affiliate near Canada's largest airport, Toronto Pearson.

"It was the most painful and stressful [experience] I've ever had dealing with a company" said Sills, one of the viewers who wrote about his rental with this Economy location. "Once you lay your credit card down and rent that vehicle you are at their mercy. They can do whatever they want to you."

When Marketplace visited the Economy Rent-a-Car location, they found employees upselling customers on insurance they may not need.

There are two types of insurance customers should be aware of when renting a car.

While the minimum amount required varies per province or territory, anyone who owns a vehicle in Canada is legally required to have liability coverage, including rental car facilities. In Ontario, this coverage would extend to any renter who drives the car.

The second type of insurance is collision/comprehensive. This is optional in all provinces and territories, except for Saskatchewan and Manitoba.

Marketplace sent in Sills and another customer wearing hidden cameras. Each had different coverage. 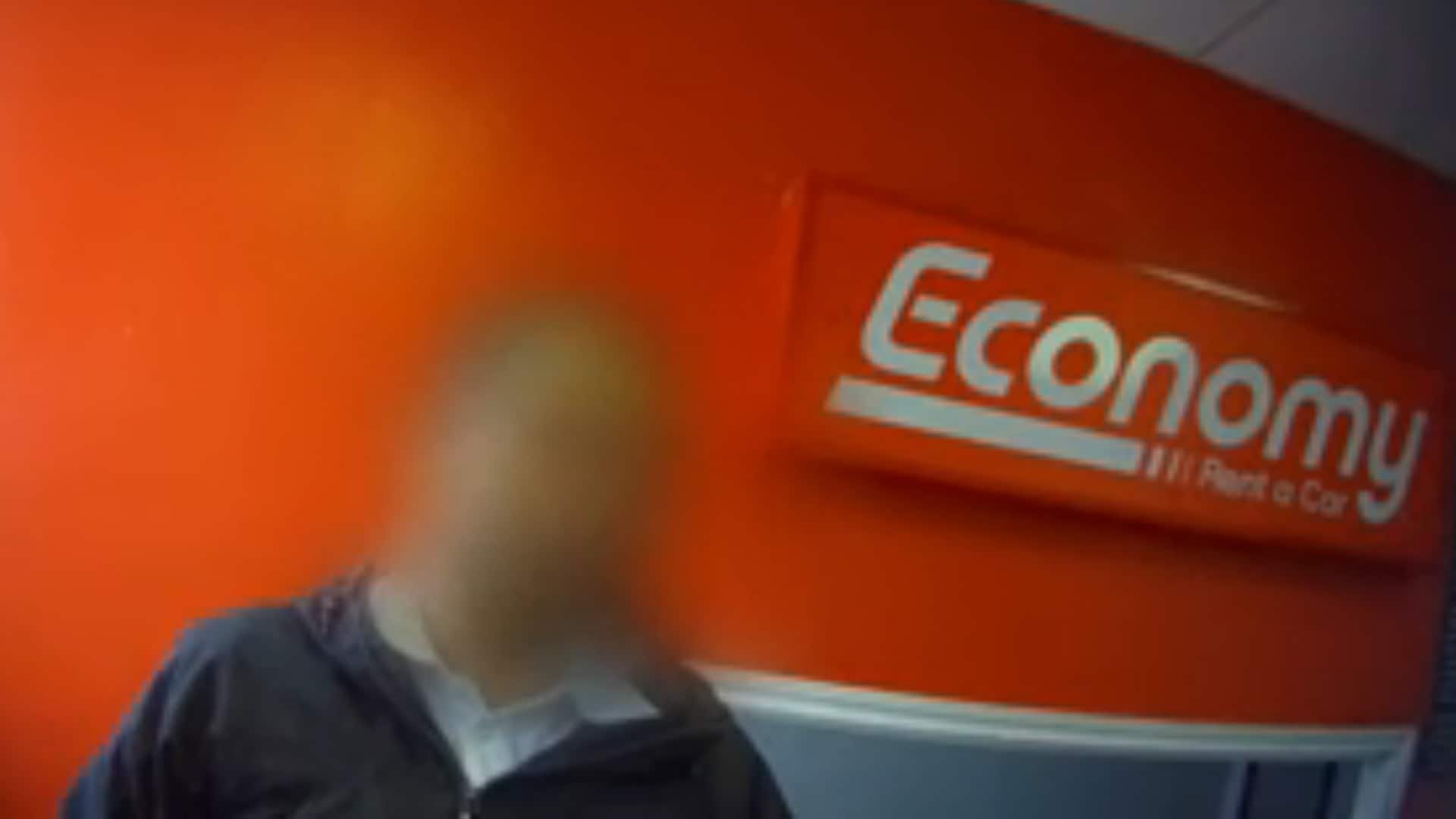 12 months agoVideo
3:16
Marketplace visited Economy Rent-a-Car in Mississauga, Ont., where hidden cameras showed an employee upselling insurance that the customer may not need. 3:16

In Sills' case, he was covered for both liability and collision/comprehensive because he had an endorsement 27 — a provision in his policy that extends the coverage to other vehicles like rental cars. Adding this to your policy usually costs less than $100 annually.

But Sills was charged $30 a day for insurance from Economy Rent-a-Car because he did not have his policy with him as proof.

Pete Karageorgos from the Insurance Bureau of Canada called this "concerning."

"I'm in insurance, and I don't carry my insurance policy with me," he said.

Marketplace's second secret shopper, Ryan Jones, who also wrote to the show about his experience at Economy, has coverage for car rentals through his credit card.

But Economy charged him a fee of $11.95 per day for using his credit card coverage.

Captured on hidden camera, Economy employees offered many explanations for this $11.95 charge, including a charge to decline Economy's own Collision Damage Waiver (which one employee said costs $42 per day) and a charge for liability insurance.

The Insurance Bureau of Canada says that rental car companies must insure their own fleets and they can't actually sell liability insurance to customers.

Economy said it doesn't sell liability insurance and that the employee may have misspoken.

In an email, Arti Sood, the owner of the Economy Rent-a-Car at the Toronto airport location, told Marketplace the charge is for costs that credit cards may not cover, such as towing and loss of use, and diminished vehicle value.

Karageorgos says you're "under no obligation" to purchase any of the coverage offered, but be sure you are protected. Before you go, check your own policy and consider additional coverage if necessary. Things to keep an eye out for: glass damage, theft and vandalism protection.

"If you don't have your own insurance or if you don't purchase their waivers, there may be financial penalties if there's damage to the vehicle. That's your responsibility."

Marketplace has also heard from viewers about what they call extra fees — and some surprise charges they weren't expecting when they made a reservation.

Receipts from Sills, Jones and other Marketplace viewers show a multitude of fees at this Economy Rent-a-Car that most competitors either charge less for or don't charge at all.

"The number of different egregious charges…. It's like a buffet of extra charges, and it's impressive to say the least. It does stand out," said George Iny, national director of the Automobile Protection Association.

Economy later said the fee, charged to renters in Ontario, also goes toward snow tires for their Quebec vehicles, as legally mandated in that province. On hidden camera, an employee at Economy said the company offers only all-season tires in Ontario.

The Greater Toronto Airports Authority does not collect an airport maintenance fee from car rental agencies. It does issue them licences to operate at or near the airport, which allows them to charge customers a "premium location fee." That fee is not collected by any third party; it's just another revenue source for the car rental companies.

The GTAA confirmed to Marketplace that Economy has such a licence, and said it caps the location fee at 15.6 per cent for those operating off-site, like Economy.

But on the secret shoppers' bills, it's clearly stated that the AMF location fee is 17.95 per cent.

The Economy location told Marketplace the difference charged was for administrative fees.

Iny says companies not located at the airport shouldn't be charging the fee at all.

"If I call it an airport fee and I'm not even collecting it … then I'm just condoning a deceptive practice," said Iny.

In addition, at Economy the 17.95 per cent airport fee is applied to the total bill (excluding damage charges and before HST). For Sills, the AMF alone was $58.65 for just a four-day rental.

"What these things are is a regional or even local money grab," Iny said. "Somebody creative adds a lot of abbreviations next to the taxes and puts a dollar value on it that they think they can get away with."

Between 2016 and 2018 the Competition Bureau fined large car rental companies like Avis, Hertz and Enterprise for false and misleading advertising.

Iny thinks it's time for the Competition Bureau to step in again.  He says while many rental car companies offer good value, there needs to be more regulation.

"There's a culture in the industry around bogus charges," he said. "I think it will need outside intervention. There has to be a price to pay."

The Competition Bureau said it cannot disclose whether or not it's investigating a particular company but the agency encourages anyone who feels they were misled to file a complaint.

A common theme Marketplace heard was having to pay for damage customers say they didn't cause. This was a particular problem with Economy Rent-a-Car's Mississauga location.

He says he was accused by Economy of handling a rearview mirror aggressively. "They demanded that I pay $1,380 up front as a deposit for the damages, or that they would send creditors after me and it would cost me my credit rating. It would ruin me. They demanded to get paid right away."

One expert says the best way to avoid damage charges is to do a pre-inspection of the vehicle.

"You know, it really only takes 5-10 minutes to go around the outside of it," said mechanic and owner of the Carquestions YouTube channel Mark Whinton. "And it's your choice: Wanna spend 5-10 minutes or $1,000?"

WATCH | What to look out for before leaving the lot 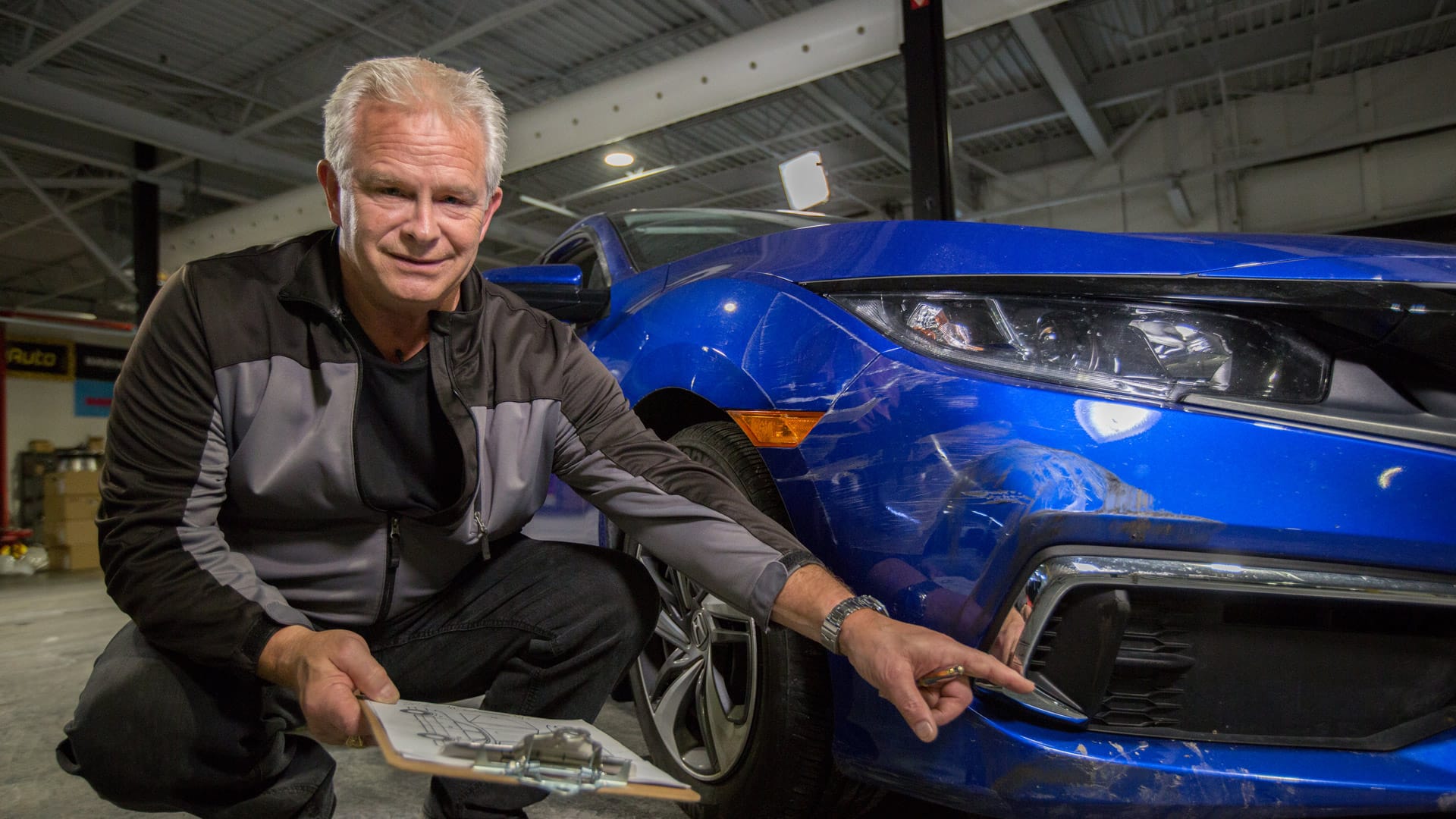 12 months agoVideo
1:50
Mark Whinton says that a detailed inspection can protect consumers from being charged for damage they didn't cause.   1:50

Joanne Windh did take the time to inspect her rental vehicle at Economy Rent-a-Car. At the time of pickup, she and her husband, Jay Sugunan, noted a damaged bumper, which was marked on their pre-inspection sheet.

But when the couple dropped off the vehicle, they say they were blamed for that same damaged bumper, and told they would have to pay up or the rental would be kept open, incurring late charges.

"He kept us hostage and said … unless you pay right now at this point, you're not going to be able to take the receipt and leave," said Sugunan.

To prevent this, Whinton recommends taking time-stamped photos of everything, including things you might think are minor. "You don't know what their criteria is for charging you."

Windh ended up not being charged by Economy for damage, and is currently disputing other charges that were subsequently added to her bill through her credit card company.

Economy maintains both Jones' and Windh's cars were returned damaged, and denies overcharging anyone.

In addition to pictures, Whinton suggests picking up the vehicle in the daylight or, if that's not possible, using a strong flashlight to examine the car.

"You look for broken glass, you look for scratch marks ... lift the wiper blades up," said Whinton.

Whinton also suggests checking the interior of the car, including pockets, the glove box and the backseat.

The glove box should contain both insurance papers and ownership for the vehicle. Out of three vehicles Marketplace rented from the Economy Rent-a-Car Mississauga location, one was missing proof of ownership, two had ownership with expired stickers, and none had proof of insurance.

"You have no ownership, you have no insurance — and, of course, it's completely illegal to drive a car in Ontario without it," warns Whinton.

Sgt. Kerry Schmidt with the Ontario provincial police confirmed that missing these documents could result in fines for both the driver and rental company.

Sills booked his rental on Expedia, a good site for comparison shopping. Low prices and the promise of unlimited mileage push smaller companies like Economy to the top of the search results.

However, as Sills discovered, not everything on Expedia is as advertised.

"I went onto Expedia and I found the Economy deal and it looked good. It was the lowest advertised price, said unlimited kilometres in numerous spots, and I'd really felt like I did my due diligence before renting this," he said.

But he actually had another $160 in mileage charges added to his bill. That's because this Economy location doesn't offer unlimited kilometres to anyone with an Ontario licence or anyone leaving the province, despite repeated promises on Expedia.

Most clients only learn that when they reach the counter, because those terms are not easy to find on Expedia.

The site displays rules and restrictions by categories such as "insurance" and "forms of payment." There is a "mileage" section, but information about Economy Rent-a-Car's mileage restrictions is not there; it's located in a section titled "other."

"I thought it was incredibly deceptive how they would bury this stipulation in a very hard-to-find area of their rules and restrictions page," said Sills.

Economy employees said Expedia is to blame for the way rules and regulations appear online. They also noted that mileage information is displayed in the same way for other small car rental companies — something Marketplace confirmed with several of Economy's local competitors.

In an emailed statement, Expedia said it will review the way it displays mileage restrictions.

Iny says don't rely on Expedia's information, and always check the rental company's own website for terms, conditions or fees that aggregating websites may have missed.

If you have any concerns or don't feel comfortable, the best thing to do is to leave it on the lot. 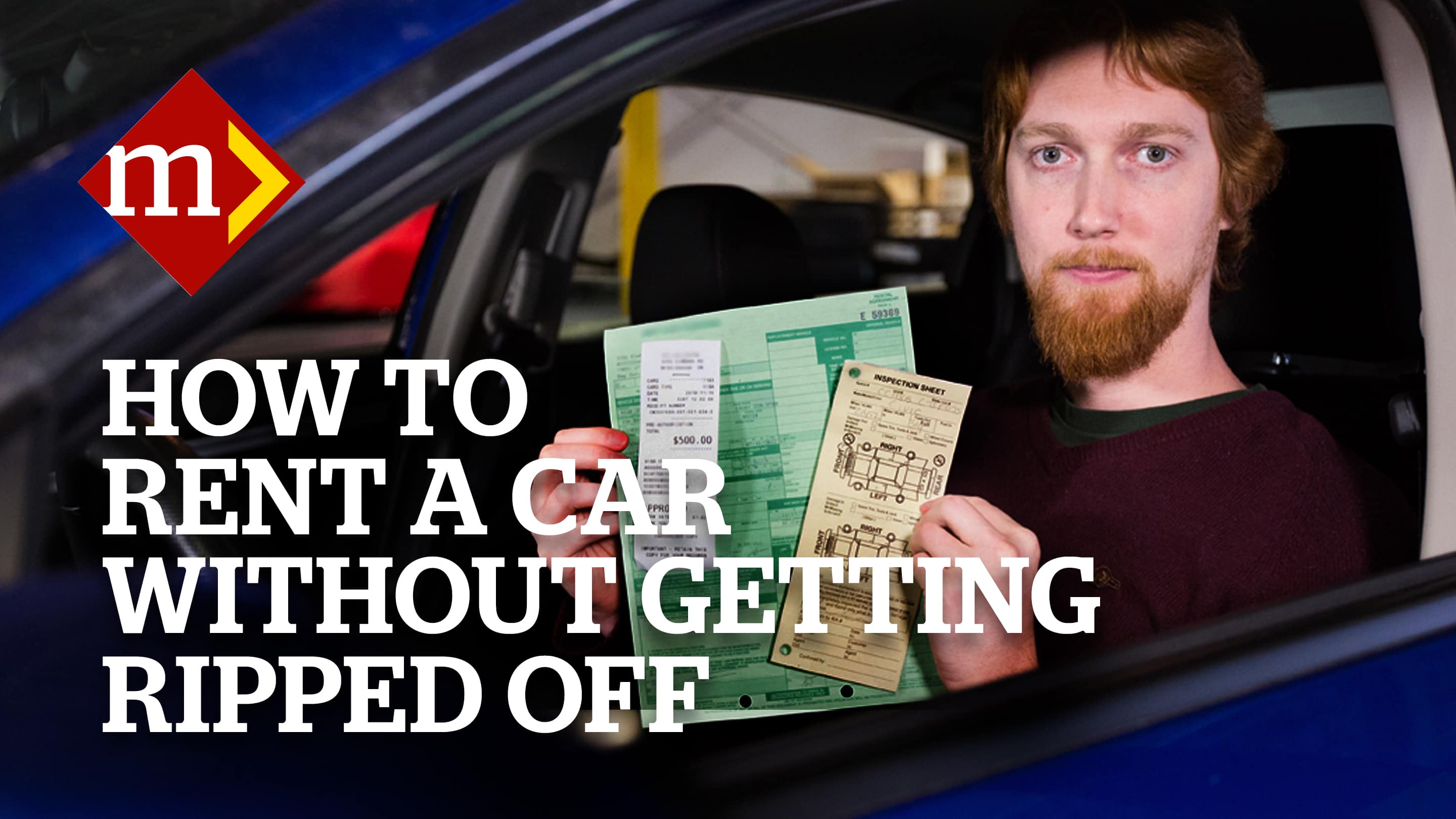 How to Avoid a Car Rental Rip-off