Self-checkouts: Who really benefits from the technology?

Just who benefits when companies turn to self-service kiosks? CBC’s Marketplace took a closer look how the technology can help — or hinder — consumers.

It's clear self-service is here to stay, but not everyone is convinced customers are coming out on top 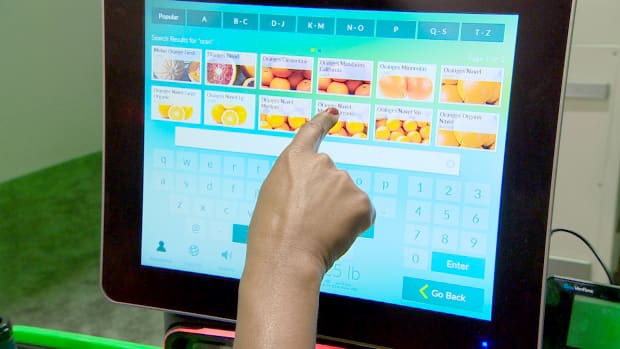 5 years agoVideo
1:54
Self-service technology is here to stay, but not everyone is convinced customers are coming out on top 1:54

And it's not just in-store shopping: Canadians are selecting their own movie seats, printing their own event tickets and checking themselves into flights.

But not everyone is buying it.

"I'm starting to resent doing unpaid work," says Bonnie Banks, who lives in Whitby, Ont. "And it seems to be escalating."

Self-service may strike many as convenient, but some critics say consumers don't always benefit — in savings or speed — as much as they think.

"We are doing a lot of jobs that used to be done for us by someone else," says Craig Lambert, author of Shadow Work: The Unpaid, Unseen Jobs That Fill Your Day.

"You may choose to do it — some people think it saves them time, gets them out of the gas station quicker. But there is a price to be paid."

CBC's Marketplace took a closer look how self-service can help — or hinder — consumers, and what the trend is going to mean for us all in years to come.

The first self-checkouts showed up more than 15 years ago. There are now 200,000 of the machines in stores around the world. And that number is expected to reach more than 335,000 by 2020, according to figures from London-based research and consulting group RBR.

The newer machines don't just scan and take your cash. Self-checkout kiosks can also be programmed to upsell, and may succeed in getting you to buy more where humans fail.

In a 2004 experiment, McDonald's found that customers using self-service kiosks supersized their meals, spending 30 per cent more on average. One reason? We're more willing to increase the order when we're not worrying about the person behind the cash judging our choices.

"Some people like to be in control of what's going on. Some people like to have a very private experience. So if I'm going in and buying something that's maybe a personal item, I might prefer to buy it on my own without help," says Christina Forest, a senior project manager for Fujitsu, which makes self-checkout machines.

The latest technology can also include wearable sensors that alert employees to when you need assistance.

With stiff competition from discount stores and online retailers, many companies have to find a way to provide better service for lower cost, says Dusty Lutz, general manager of self-checkout solutions at NCR, the world's leading manufacturer of self-checkout kiosks.

"The reason that stores are wanting to be more efficient is because they've got to stay more relevant on price," he says.

Aside from the obvious technology costs, having customers do some work themselves can mean less overhead costs for companies.

For example, the cost of checking in a passenger at the airport is about $3 with a staffed desk, according to a report from the Information Technology and Innovation Foundation entitled Embracing the Self-Service Economy.

But when customers use electronic terminals? That cost drops to 14 cents.

In total, moving to a fully automated check-in and boarding process could save the airline industry $1.6 billion a year, the International Air Transport Association says.

Are those savings being passed on to the consumer? Marketplace spoke to leading retailers and industry experts and found no clear evidence that is always the case.

"Shadow work, at times, will get you a better price on things. Generally it doesn't," Lambert says.

And do self-checkouts get you out of the store faster? Marketplace timed shoppers with identical grocery lists to see how cashiers compare to self-checkouts.

The cashier was able to get through the transaction faster and with fewer problems. And in one case, an incorrectly punched code at a self-checkout meant one shopper was charged $70 for 10 brussels sprouts.

There's also some evidence that age matters when it comes to who is willing to embrace the machines. According to the U.S.-based National Restaurant Association, more than two-thirds of American consumers between 18 and 34 prefer to use self-service at quick-serve restaurants.

Cody Turner, a 27-year-old photographer in Toronto, prefers the self-serve approach when it comes to everything from buying concert tickets to online banking to choosing his own airline seat.

But love it or hate it, Lambert says self-service is here to stay. And it will become more prevalent.

"I will predict that it's going to increase, because the incentives are there," he says. "How can you say no to the proposition of getting free work from your customer?"

Beyond money, Lambert says there are other ways doing "shadow work" costs us.

"It often takes the human being out of the equation," he says. "Those small relationships are part of how you build a community, frankly.

"Robots don't interchange banter. There's no pleasantries going back and forth between you and the kiosk. And as a result, it somewhat dehumanizes daily life."

Jenni Murray, a columnist for the U.K newspaper Daily Mail, wrote she finds the increasing dependence on self-checkouts "a frustrating, depressing experience."

"There's nothing like some human contact for making a dull chore a better experience," she wrote in a column last year.

That, too, could come at a cost — to the companies.

According to research by the retail-technology company Tensator, one out of every three British shoppers polled had walked out of a store without the goods they intended to buy, simply because of a bad experience with a self-service checkout.